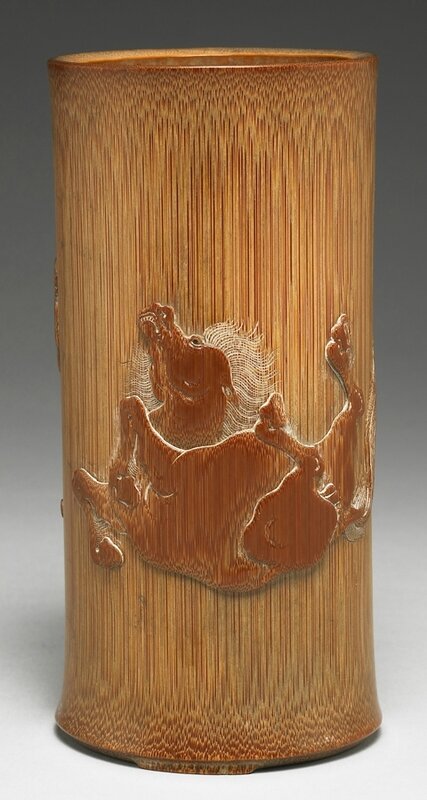 The three-footed brush-holder is made of a stem section, with one joint kept for the base which curves a little inward. The surface is slightly scraped off using the jiandi technique (thinning the ground) along the top and bottom rims so both look somewhat flared. In low relief is carved a horse lying on the back rolling and kicking. A stableman wearing a puto (bandanna-like headgear), both hands grasping the reins, is trying to subdue the angry horse: its mane all flaring, the front legs bending along with upper body twisting toward the left, and the rear hooves thrusting up high into the air. The artist captures a split-second moment of the taming attempt. The images of the pair are both raised above the surface only slightly. The fine lines of the engraved mane, tail, and hairs around the hooves, go gradually flush with the ground. All this speaks vividly of the carver's superb mastery of the buodi (thin ground) technique. Further, against the slightly raised figures, in negative engraving are the features, the folds, the muscles and texture. The folds of sleeves are represented as in portrait painting: dintou shuwei, literally translated, "nail head and mouse tail", a style of line drawing which starts deep and hard, then finishes off lightly. The man's facial muscles are done in low relief; even the eyelids are there. So are the body muscles of the rolling horse. Each of the four hooves is carved with varying degrees of depths against the surface, achieving an impressive three-dimension effect. The exposed horse teeth are carved one by one, with every single detail carefully tended. Some semi-translucent pigment of dark brown dots the horse eyes, fully serving the purpose of the final touch, "Marking the Pupils", so to animate the figures or the animals being depicted. The man and the horse form the only images on the brush-holder; all other space is left bare without decoration. The one exception is that behind the stableman, engraved are four characters in elegant yet forceful Xing(running) script "by Wu Zhifan". Here the carving knife goes either harder or lighter traversing through each character, as if it had been a calligraphic brush's movements. The exact precision in execution shows that the maker of the piece must have been a fine practicing calligrapher himself.

Wu Zhifan (byname: Luzheng; self-epithet: an East Sea Taoist) was born around early-Qin, died in either the late Kangxi reign or the first few years of Yongzheng reign and was active mainly during the mid to late-Kangxi. A resident of Nanxiang Township Jiading County, Jiangsu Province, later he moved north to Tianjin, Hebei Province and enjoyed the hospitality of an official there, surnamed Ma. Wu never returned south to his hometown and little was known about his final years. He was a fine painter and calligrapher, specialized in the genres of flower-and-bird and portrait painting; his calligraphy in Cao (cursive) script was very charming yet strong. He inherited the "Three Zhu's of Jiading" heritage shared by many bamboo carving artists in the region, that more than mere artisanship, a decent carver ought to be well-versed in painting and calligraphy. And he was one of the best in this tradition. A pity that he didn't get to achieve any fame and success back at home during his lifetime. Lack of any renowned literary figures among his acquaintances did not help either. As a result his life and doings have remained obscure as a whole.

Wu's carving was in Jiading's style, combining high relief, in the round, and openwork. This sophistication had been the hallmark of Jiading bamboo carving. He was expert in all these techniques and capable of another signature line of Jiading bamboo ware: the tube-shaped container made of a bamboo stem between joints. Composition on such an elaborately designed yet convex surface posed a major challenge for the carver. How to seamlessly flow from one element to the next, beginning to the end, had been the number one issue that had to be dealt with ever since the Three Zhu's time. Wu had to, too. Using the cliff wall surfaces in the image to connect it all was his usual solution.

His much-admired buodi yangwen, also known as buodi yangke, namely low relief, required a very thin layer of the outer skin to be scrapped off the bamboo stem, thus leaving the image very slightly raised above the ground. The similar jiandi technique of thinning the ground around the image had been used way back in the Han dynasty's portrait-carving on stone, such as the ones at a family temple in Jiaxiang County, Shantong Province. Wu took full of advantage of the firmness of bamboo texture to apply his buodi yangwen technique. The low relief design thus formed also leaves out much "white space" undecorated for the viewer to indulge his own imagination. The present brush-holder fully characterizes Wu's famous style.

Low relief in essence, buodi yangwen carves its raised images almost level with the skinned surface around. The fine grain and firm fiber of bamboo make this unique treating possible, which otherwise would have easily broken.