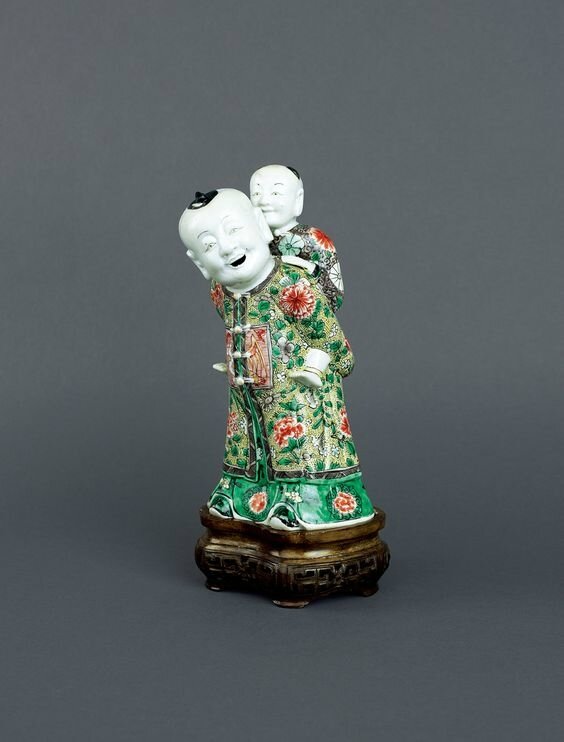 modelled as a standing smiling young man wearing long yellow ground floral robes and the official badge of a first-grade civil mandarin beneath three button tied clasps carrying a younger boy on his back who wears an aubergine ground flower head jacket, the base unglazed.

Provenance: Formerly in the collection of Emily Norwood Trevor, New York, thence by decent to her nephew John B. Trevor, Jr., Palm Beach, Florida. Emily Norwood Trevor was the sister-in-law of Grenville Winthrop, the famous art collector whose collection was left to Harvard University in 1943. It is believed by family tradition that this piece was purchased from Duveen Brothers, New York, in the early 20th Century.

A similar piece is illustrated by Anthony du Boulay in The Taft Museum, Cincinanati, It’s History and Collections, Vol. II, pp. 620-621. and was included in their exhibition of Ming to Ch’ing: Imperial Objects and Textiles, Masterpieces of Chinese Furniture, February 12th to June 30th 1975; another formerly in the collection of George Eumorfopoulos was included by William R. Sargent in The Copeland Collection, Chinese and Japanese Ceramic Figures, The Peabody Museum of Salem, no. 47, p. 103; another is illustrated by Frank Partridge and Sons Ltd. in their exhibition of A Collection of Old Chinese Porcelain, Summer 1933, no. 53.