Pendant with the monogram AA for the elector couple Anna and August of Saxony, Southern Germany (probably Nuremberg), 1548-1585

Pendant with the monogram AA for the elector couple Anna and August of Saxony, Southern Germany (probably Nuremberg), 1548-1585 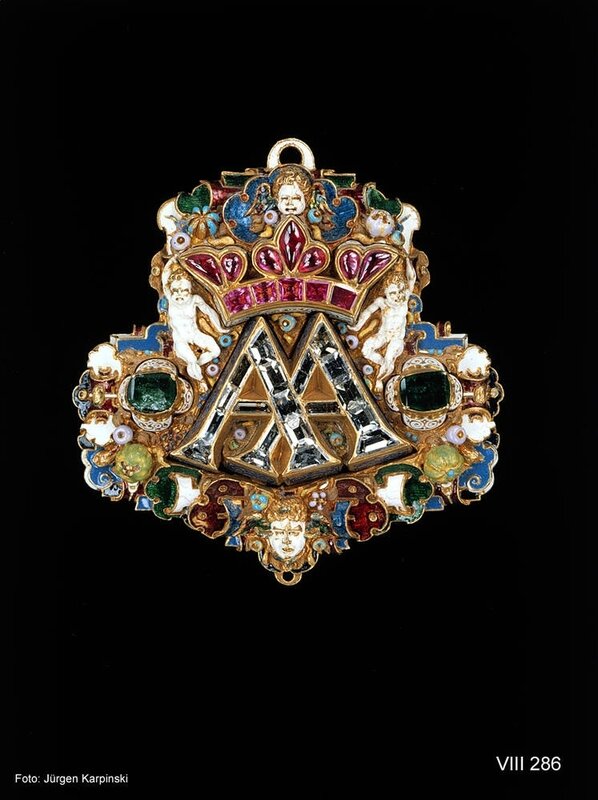 Name initials can be found at the latest since the beginning of the 16th century in the form of embroidery on dresses. The takeover in the jewelry takes place almost simultaneously. In most cases, the initials can be resolved on the owners and their spouses. In 1548, the Danish princess Anna and future Electress of Saxony brought in their dowry a gem with the letter A (for Anna) and a necklace with the initials C and D (for her parents, Christian III and Dorothea of ​​Denmark) , In the course of her life the Elector had belts, chains and pendants made with the initials A or the double A (for August and Anna). To emphasize their royal descent, some of the jewels also wore a crown. The monogram pendant is one of the few remaining pieces of jewelery Anna. The letters AA referring to the Electoral pair are made of diamonds and the crown is made of rubies. Colored enamelled goldsmith's work with figurative motifs, into which predominantly table-cut gemstones were inserted, found their inspiration in Renaissance graphics. Verifiable relations of the Elector August to Nuremberg point to the trading and goldsmith metropolis as the place of origin of the jewel.
Posté par : Alain Truong à 19:38 - Joaillerie /Jewelry - Commentaires [0] - Permalien [#]
Tags : 1548-1585, Green Vault, Nuremberg, Pendant with the monogram AA for the elector couple Anna and Aug, Southern Germany

Commentaires sur Pendant with the monogram AA for the elector couple Anna and August of Saxony, Southern Germany (probably Nuremberg), 1548-1585