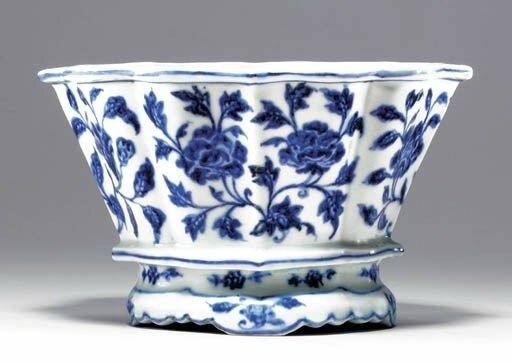 The deep, flared sides unusually shaped as four bracket lobes rising to an everted rim, each lobe well painted in inky tones of underglaze blue with a different branching stem bearing two flowers, including peony, camellia, lotus and magnolia, raised on a pedestal base with four cloud-shaped feet joined by a shaped apron and painted with small detached flower sprigs, box and stand.

Note: This is an exceedingly rare vessel, but one entirely in keeping with the aesthetics of the early 15th century. Lobed flower pots of somewhat simpler form were made in the Song dynasty, as can be seen from the Ge ware example now in the Palace Museum, Beijing, illustrated in Zhongguo Wenwu Jinghua Daquan, Taipei, 1993, p. 262, no. 302, and elaborate feet and flattened rims were seen on hexagonal flower pots with molded floral decoration and Longquan celadon glaze discovered on the Sinan wreck, as illustrated in The Sunken Treasure off the Sinan Coast, Japan, 1983, p. 36, no. 27. The four-lobed, oval shape was likened to a begonia and was popular at various kilns, including the Jun kilns, as can be seen from an example bearing a palace inscription in the collection of the Palace Museum, Beijing; see Porcelain of the Song Dynasty (I): The Complete Treasures of the Palace Museum, Li Huibing (ed.), Hong Kong, 1996, no. 20. It was also adopted at Jingdezhen, as evidenced by an example with cloud-shaped feet excavated in 1977 from a tomb dated to AD 1205 at Zhangshu, Jiangxi, illustrated in Dated Qingbai Ware of the Song and Yuan Dynasties, Peng Shifan (ed.), Hong Kong, 1998, no. 62.

A jardinière of the same shape, size and major decoration in the Palace Museum, Beijing, is illustrated in The Complete Collection of Treasures of the Palace Museum, Blue and White Porcelain with Underglaze Red (I), Hong Kong, 2000, p. 134, no. 126, where the shape is described as that of a water chestnut flower, and the vessel is attributed to the Xuande reign. The Palace example is not so well painted as the Falk jardinière, especially around the base area.

The style of painting of the peony sprays on the sides of the Falk vessel accords closely with the painting of the peony spray in the center of the dish excavated from the Yongle strata at Zhushan in 1988 and included in the exhibition, Imperial Hongwu and Yongle Porcelain excavated at Jingdezhen, Chang Foundation, Taipei, 1996, pp. 170-1, no. 53.

Vessels excavated from the site of the Imperial kilns at Jingdezhen bear witness to the popularity of porcelain flower pots, both monochrome and decorated, at the early Ming court. Of particular interest are two jardinières excavated from the Xuande strata, illustrated in Xuande Imperial Porcelain excavated at Jingdezhen, Chang Foundation, Taipei, 1998, pp. 40-1, nos. 34-2 and 36. One of these is hexagonal and the other rectangular. Both have flattened rims and both are decorated in underglaze blue, but the hexagonal vessel also has overglaze iron-red decoration. An interesting feature of both is that they have solid bases, on which the cloud-shaped feet have been painted, rather than being cut as on the possibly earlier Falk jardinière. This was no doubt due to the fact that the weight of these vessels rendered firing on feet difficult, with the result that the potters in the Xuande reign chose the easier option of merely painting the feet. The rectangular flower pot has only narrow bands standing in slight relief at the top and bottom of the foot, while the hexagonal vessel has a protruding flange, like the Falk piece.