'Centuries of Opulence: Jewels of India'. Unique exhibit at GIA in Carlsbad, California

'Centuries of Opulence: Jewels of India'. Unique exhibit at GIA in Carlsbad, California

“Centuries of Opulence: Jewels of India” features 50 lavish, historical jewelry pieces on loan from a private collection that have rarely been seen in public. Showcasing more than 300 years of adornment in India, the exhibit explores the original sources of the diamonds, rubies, emeralds, sapphires and other gems decorating these pieces, their religious and cultural symbolism, the wars fought for them and the historical tradition of gemology - the study of gems - in India. The Hindu god Krishna is flanked by his two consorts, Rukmini and Satyabhama, in this padakkam (elaborate pendant). It is a true gem mosaic, with kundan-set rubies, emeralds and diamonds; the three faces are carved from emerald and ruby. This pendant was made to adorn a life-size temple statue of Lord Krishna. 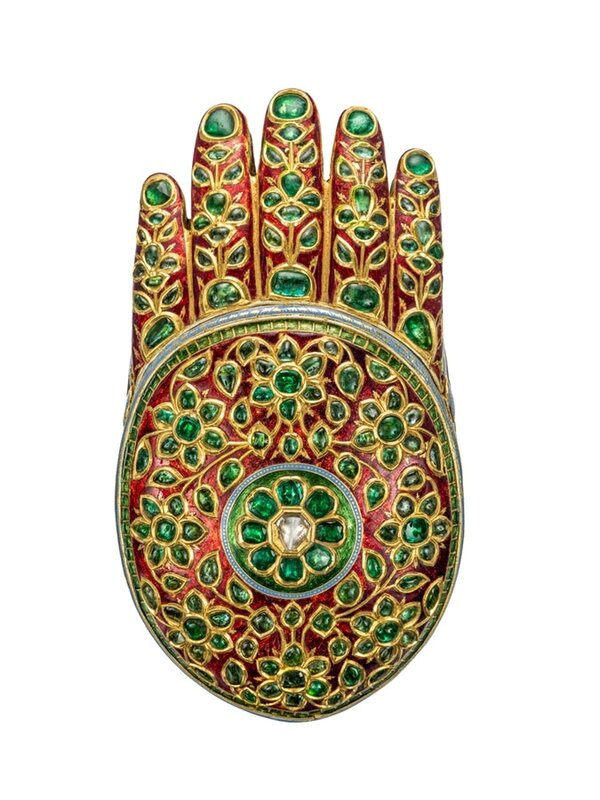 Fashioned from emeralds and diamond and set in enameled gold, this exceptional Hindu ritual artifact is engraved in Sanskrit on the back with devotional verses from the Bhagavad Gita in praise of Lord Krishna. While a necklace exhibiting mango-shaped elements (a manga mala) is traditional in South India, a manga mala as elaborate as this one was worn only by those who could afford such a massive gem-set jewel. Note the stylized mangos around the collar of the necklace. Its pendant represents the mythical two-headed bird (gandaberunda) that was the emblem of Mysore’s Wadiyar royal family. There is elaborate repoussé detailing on the back. This gold pendant features a 125 carat Colombian emerald engraved in Arabic with salutations of peace. Set with diamonds, Burmese rubies, emerald beads and dangling pearls, it was made for a ruler of the Kingdom of Mysore. Obtained from descendants of the Nizam of Hyderabad, this magnificent necklace and matching earrings are set with approximately 150 carats of Golconda diamonds and 47 Colombian emerald beads. They are strong symbols of the power and wealth of one of the richest ruling families of India 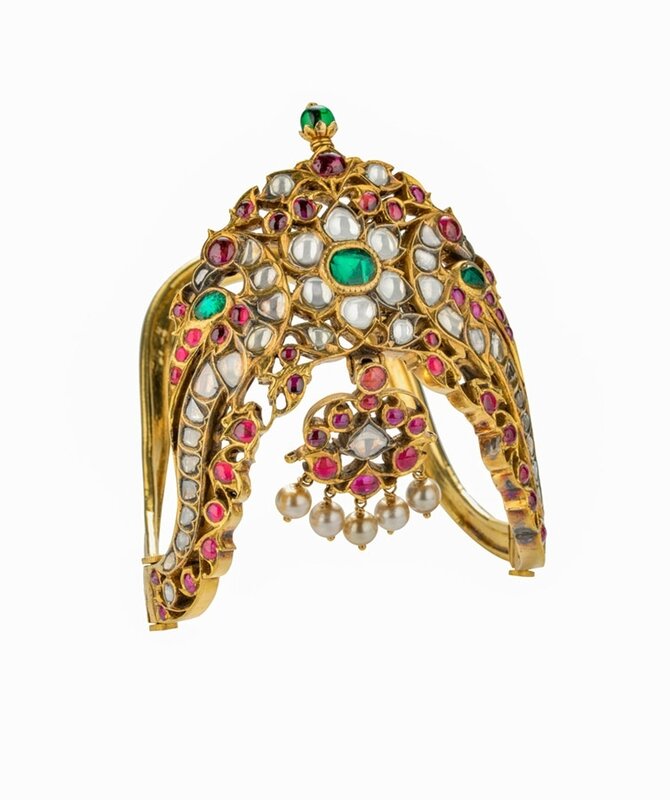 This traditional armlet (vanki) was worn by dancers from the Meenakshi temple of South India. In this gold pendant, a host of gemstones form a mosaic of the god Shiva dancing on the demon of ignorance and greed. Lord Shiva’s face is carved out of a blue sapphire. Above his head, carved in emerald, is the monstrous “face of glory” kirtimukha (also known as the mascot of hope). Reserved for the wealthiest and most powerful, this jigha ornament, designed to be tucked into the folds at the front of the turban, is one of the few known to have been fashioned from jade. White jade, also known as “mutton fat” jade, was believed to ward off heart disease and high blood pressure. The jigha often takes the form of a feather, and some early jighas had a small pocket (parkhane) in the back of the jewel into which heron feathers would be placed when it was worn.