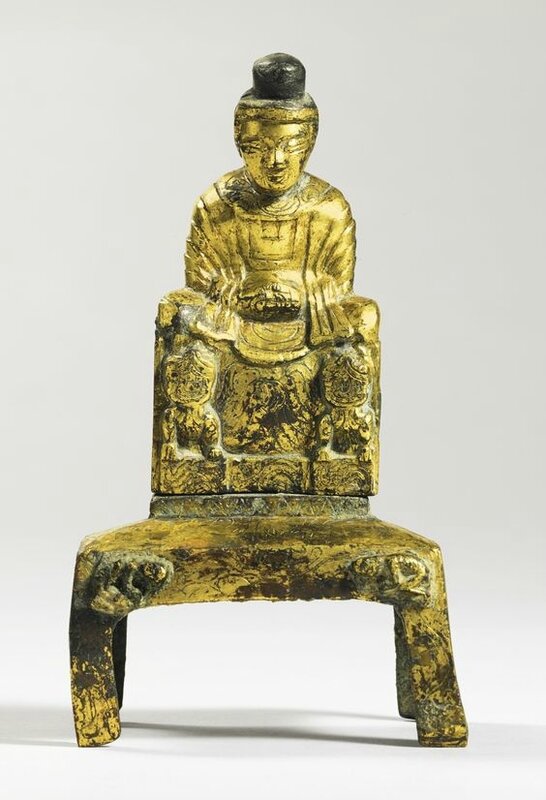 Note: Portable religious icons provide evidence of the early transmission of Buddhism from Central Asia into China. Gilt-bronze figures of Buddha were particularly popular, perhaps bolstered by the belief that Buddhism’s introduction into China was inspired by Han Emperor Ming Di’s (28-75) dream of a shining gold figure, jin ren.  The earliest known dated Chinese bronze Buddha is the seated figure in the collection of the Asian Art Museum, San Francisco, made in the 4th year of Jianwu (338), which displays the stylistic development of its Central Asian proto-type. The 5th century witnessed the complete adaptation and transformation of Buddhism in the Chinese context, and the production of Buddhist images became an important part of the new ideology and iconography.

The present gilt-bronze figure portrays the meditating Shakyamuni Buddha seated on a plinth decorated with two lions, and placed on a separately cast pedestal incised with a lotus pattern and set with two prostrating donors cast in relief on the front apron. The parasol and aureole that would have been inserted into the two tabs on the back of the figure are missing. Such small objects were used for private shrines and were easily transportable. The treatment of Buddha’s hair and the portrayal of the garments are characteristically Chinese, but the composition and decorative motifs display Central Asian influences. Stylistically, the bronze dates to the first half of the 5th century, and was made in the Dingzhou area of today’s Hebei province. There is a similar gilt-bronze seated figure of Buddha, with the pedestal, aureole and parasol still attached , illustrated in Zhongguo wenwu jinghua dacidian-qingtongjuan, Shanghai, 1995, no. 1244, unearthed in Shijiazhuang in the 1960s, and another one found in Baoding , illustrated in Wenwu 1987/7, pp. 67-8, both in Hebei province. A similar example which originated in Hebei but was discovered in Jinchuan, eastern Gansu province in 1975, is illustrated in Zhongguo wenwu jinghua dacidian-qingtongjuan, ibid, no. 1246, and exhibited at the Monks and Merchants: Silk Road Treasures from Northwest China, Exhibition, Asia Society, New York, 2001, cat. No. 47, pp. 150-1.

Also compare the examples in the collections of the Beijing Palace Museum, illustrated in Mingke yu daoshu, Hong Kong, 2008, no. 164;  the Tokyo National University of Fine Arts and Sano Art Museum in Shizuoka, illustrated in Saburo Matsubara, Chinese Buddhist Sculpture—A study based on stone statues other than works from cave temples, Tokyo, 1966, pl. 7 a, b, c, pl. 7, which also illustrates five other similar pieces in private collections; and two other examples previously in the Nitta Group collection, now in the National Palace Museum, Taipei and illustrated in The Crucible of Compassion and Wisdom: Special Exhibition Catalogue of the Buddhist Bronzes from the Nitta Group Collection at the National Palace Museum, Taipei, 1987, nos. 55, 56, pp. 151-2.

Sotheby's. Footsteps of the Buddha: Masterworks from Across the Buddhist World, New York, 03 Sep 2013