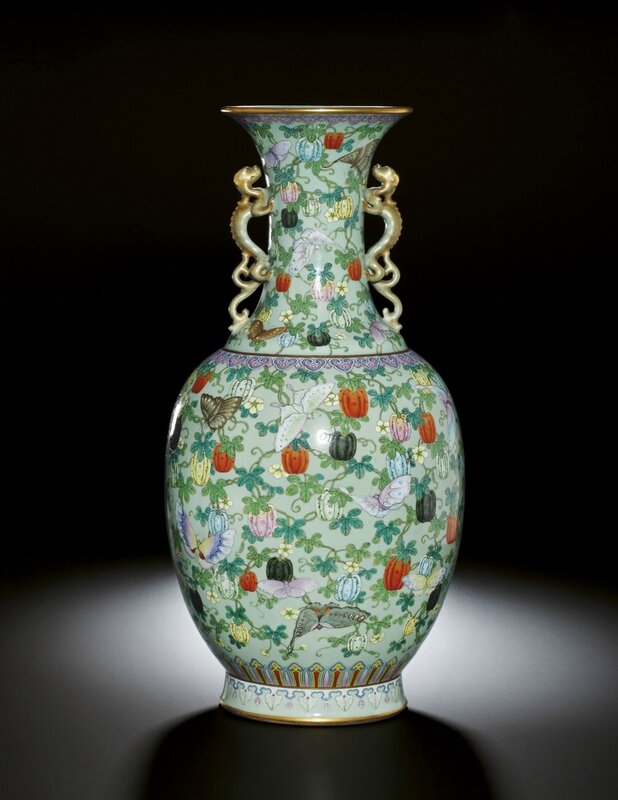 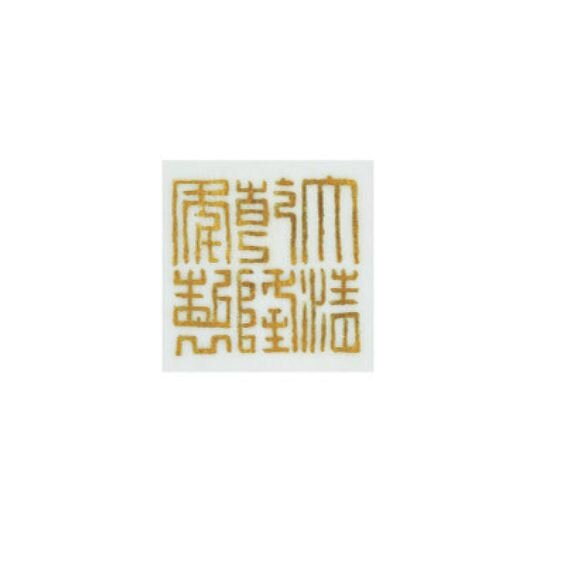 of baluster shape, the waisted neck flanked by two moulded archaistic dragon handles with scales and facial features picked-out in gilt, the body and neck intricately painted with plump sweet melons in iron-red, black, turquoise, lime-green, and pink, suspended from intertwining vines issuing broad five-pronged leaves and small yellow blossoms, all amidst delicate butterflies fluttering at various altitudes, some of light pastel-pink, lavender, lilac and green, others of deep ochre-red, charcoal-grey with detailing elaborately picked-out in gilding, all against a light celadon-green ground extending to the interior and base, a border of pink ruyi-heads at the rim and collar, and a band of pendant leaf lappets at the foot below a border of upright petal lappets, the base gilded with a six-character seal mark.

Note: Exquisitely enamelled to complement an elegant elongated form, the design of butterflies hovering amongst melons hanging from vines is rare and no similar example appears to have been published. The rarity of such a piece is not surprising given the high standards of the imperial manufactories under the keen eye of the Qianlong emperor and the rigorous scrutiny of the imperial kiln supervisor, Tang Ying. With its dense composition and fairly large blocks of colour scattered overall, as well as the naturalistic representation of the fruiting melon vines, this demanding design represents the exceptional proficiency of Qianlong imperial porcelain painters.

The sophistication of the present vase has been achieved through the fusion of Western painting techniques with traditional Chinese motifs. The melons, carefully rendered to create a three-dimensional effect through the light to dark tonal gradations, and the intricate attention paid to the detailing of the fluttering butterflies reveal the influence of Jesuit artists at court. Moreover, the boldly coloured melons that appear to loom from the surface echoes the ovoid form of the vase while the twisting vine branches are repeated in the sinuous qilong handles to create an added sense of harmony and movement.

Only a very small number of vessels with this decoration from the Qianlong period are known; see a sky-blue ground meiping decorated with a more sparsely-composed motif of butterflies and melons applied in iron-red and green enamels, in the Shanghai Museum, illustrated in Chugoku toji zenshu, vol. 21, Shanghai, 1981, pl. 125; and a Beijing enamel snuff bottle and a glass snuff bottle, both painted with butterflies and melons, in the Palace Museum collection, illustrated in Chugoku no toji, vol. 11, Tokyo, 1996, p. 137, pls. 77 and 78.

A related but more schematised design can also be found on Jiaqing vases; for example see an ovoid jar sold in our London rooms, 14th November 2001, lot 105; and another sold in these rooms, 22nd May 1979, lot 271. For an example decorated in doucai enamels see one in the Palace Museum, Beijing, published in The Complete Collection of Treasures of the Palace Museum. Porcelains in Polychrome and Contrasting Colours, Hong Kong, 1999, pl. 262.

The butterfly is a very auspicious motif, symbolising blessings, happiness and longevity. The philosopher Zhuangzhi (4th century BC) dreamed that he was a butterfly flying about in a carefree manner while sipping nectar from flowers; thus the butterfly is also an emblem of joy. When pictured with melons, this design represents the wish for numerous descendants.