standing on three cylindrical legs with steeply rounded sides divided into three lobes, each lobe cast in raised relief with a taotie mask formed from raised bosses for eyes and hooked scrolls accented with intaglio lines reserved on a fine leiwen ground, the lipped rim with two upright loop handles of rectangular section. the deep U-shaped body supported on three columnar legs and set with two upright loop handles on the everted rim, cast below the lip in low relief with a single band with segmented taotie animal masks separated by flanges, all reserved on a leiwen ground, the silvery surface with light malachite and cuprite patination.

Note: The sunken areas of the design on this bronze contain carbon, a practice common to Shang bronzes and deliberately applied after casting to emphasize the surface decoration. the body of deep rounded U-shape resting on three cylindrical legs, crisply cast around the exterior with a wide band of three ferocious taotie masks divided by confronted kui dragons, above a skirt of triangular lappets set with pendent cicadas against a leiwen ground, the rim set with two loop handles, a single pictogram to the inside rim, the metal patinated to a dark grey tone with patches of malachite encrustation. the deep rounded sides with flattened everted rim, the body set with a pair of loop handles springing from bovine-masks, decorated with a broad band of raised bosses on a ground of diamond shapes below a narrow band of four stylized kui dragons in low relief separated by two animal masks, all supported on a hollow pedestal foot encircled by a band of confronted stylized kui dragons, inscribed to the center of the interior with a single pictogram, all beneath a silvery patina with rich green malachite encrustation.

Note: Designs incorporating bosses framed by diagonal lines enclosing leiwen appear to have been used mostly on round-bodied vessels from the Anyang period, as a number of examples discovered in the tomb of Fu Hao demonstrates. They appear, however, more commonly on bronze vessels excavated from sites in Shaanxi province as Jessica Rawson notes. See Jessica Rawson, Western Zhou Ritual Bronzes from the Arthur M. Sackler Collections, Vol. IIB, Washington, D.C., 1990, p. 378. Bronze vessels with handles such as this gui, are rarer. Compare an example excavated from Liquan Xian in Shaanxi province, illlutratated ibid., p. 378, fig. 41.1. of tall circular form with a wide trumpet mouth and raised splayed foot, the long flared neck plain, the central bulb cast in low relief with a frieze of confronting dragons, divided and interspersed with notched vertical flanges, between narrow bands of circles, the lower bulb cast with a similar design frieze, the bronze a warm golden-brown patina with patches of green malachite and red cuprite encrustation, the inside of the foot cast with a long inscription.

Note: Charles Lambert Rutherston (1866-1927) was the brother of Sir William Rothenstein, Principal of the Royal College of Art, connoisseur, collector and one of the first patrons of Henry Moore, who upon visiting Rutherston in 1923 noted that he had one of the most important collections of Chinese art in Britain. 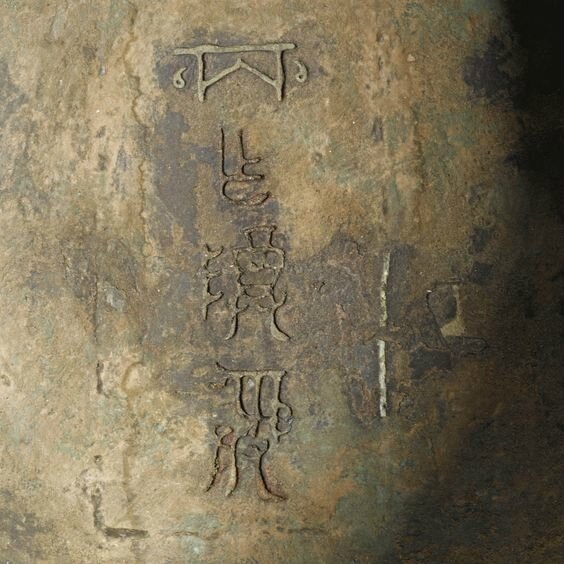 the rounded sides cast with a band of vertical ribs below a frieze of flaming squares alternating with circles and divided by raised animal heads, all on a leiwen ground, the sides set with a pair of loop handles issuing from dragon heads and set with hooked pendant tabs, all supported on a hollow upright foot decorated with a band of taotie masks with raised eyes divided by flanges, the center of the interior with an inscription comprising five pictograms, the bronze patinated to a smooth olive-green patina. of tall slender waisted form, the flaring neck with a wide trumpet mouth finely cast with four tapering blades each containing a disjointed taotie mask set upside down on a fine leiwen ground, the straight central section and gently flared foot both similarly decorated with taotie masks assembled from isolated raised elements on a fine leiwen ground and bisected by notched flanges, the surface a a matte light green with areas of brown and green encrustation.

Note: A gu published by Robert W. Bagley in Shang Ritual Bronzes in the Arthur M. Sackler Collections, Washington, D.C., 1987, p. 248, no. 36, is similarly decorated with taotie masks assembled from isolated raised elements and covered with leiwen spirals. This special design feature is characteristic of bronze designs classified by Max Loehr as 'Style Va'. A number of gu and jue recovered from sites of the latter Anyang period at Anyang demonstrate that 'Style Va' designs were well suited to these two vessel types. See ibid., pp. 249-250 and p. 255. the pear-shaped body rising from a short spreading foot to a widely flaring neck, crisply cast around the shoulder with a band of confronting dragons on a leiwen ground divided by two animal masks, the bronze an attractive black color with some areas of malachite encrustation.

Note: A similar design band but with a different animal mask, with pointed ears, can be found on a zun in the Freer Gallery of Art, illustrated in John Alexander Pope et al., The Freer Chinese Bronzes, Washington, D.C., 1967, pl. 73. Similar decoration can also be found on a four-legged you and a four-legged zun of oval section discovered in the tomb of Yu Bo Ji of the early to middle Western Zhou period at Baoji, Shaanxi province, where they were placed on a lacquer tray; see, for example, Jessica Rawson, Western Zhou Ritual Bronzes from the Arthur M. Sackler Collections, Washington, D.C., 1990, p. 35, figs. 31 and 32. the deep U-shaped body finely cast with a band of taotie masks reserved on a dense leiwen ground, one side set with a loop handle concealing two pictograms, beneath a long channeled spout opposite a raised point forming the rim, surmounted by a pair of rectangular posts rising to mushroom-cap finials decorated with whorl patterns, all supported on three slightly splayed blade feet, the surface covered with areas of light malachite patina. the tong tapered cylindrical body cast with finely detailed elongated blades bordered by a band of confronted dragons on a leiwen ground, the lynch pin cast in the form of an elaborate feline mask, the bronze with some green encrustation (3). of elliptical section and barrel form with a crescent-shaped opening, each side cast with a stylized taotie in a raised line relief, set with a loop handle for suspension.