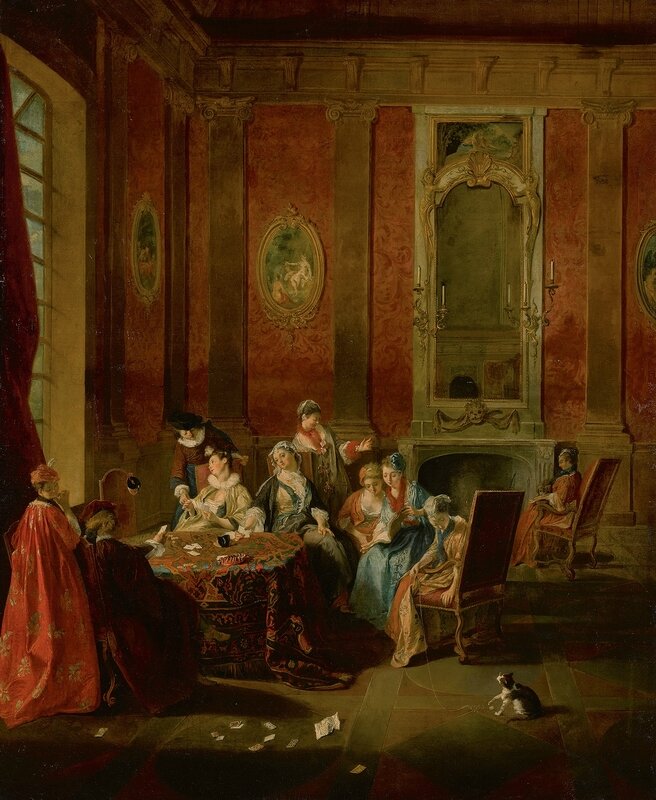 Note: This early masterpiece by Nicolas Lancret, datable to 1719-21, was last seen in public in 1889; the reappearance of Winter is one of the most exciting and important discoveries of the artist's oeuvre in recent history. The painting, one of the earliest known depictions of a Régence interior, is part of a cycle of Four Seasons commissioned directly by the French diplomat Jean-François Lériget de la Faye at a momentous point in the young artist's career.  While the paintings still exhibit the influence of his mentor, Antoine Watteau, their magnificent quality undoubtedly helped to establish Lancret’s name as an independent master.

Lancret's allegory of Winter depicts the everyday pleasures of upper-class society in early 18th-century France, set in a stately Régence interior.  A group of figures are gathered in a refined drawing room; a fire lit in the background and fur-lined overgowns worn by the elegant ladies identify the season as winter.  A card game is taking place at the table; some players are discussing strategy while others seem lost in thought, and the woman sitting at the center looks directly out at the viewer rather than at her hand.  Two women nearby are reading a score while a third stands behind them, seemingly humming along.  The young lady in the foreground entertains a kitten, while an older woman sits by the fire in the background, a small dog in her lap.

Lancret was best known for his fête galante paintings, which most often featured figures in an outdoor setting, rather than an interior as in the present painting.  He began his career as a student of Claude Gillot, from about 1712 onwards; Gillot, who also taught Antoine Watteau, specialized in genre and theatrical scenes.  Indeed it is commonly thought that Lancret's decision to enter the studio of Gillot was based on his great admiration for Watteau.  While Lancret was never Watteau’s pupil, they developed a friendship and Lancret continually looked to Watteau as a mentor.  In 1719, Lancret was reçu into the Académie Royale as a painter of fêtes galantes, a category created specifically for Watteau a few years prior.  The relationship between the two artists soured, however, at the Exposition de La Jeunesse, when two paintings by Lancret were received so positively that many thought they were by Watteau.  The elder artist did not appreciate it when his friends mistakenly complimented him on the paintings, and thus broke ties with the young Lancret.  Watteau died in 1721, and Lancret quickly established his name as an independent master, eventually developing his own style by shifting his figures further forward in his compositions and animating them with livelier gestures, both in his drawings and his paintings.

Based on the preparatory drawings that exist for Lancret’s paintings, Grasselli dates the commission to as early as 1719-21,1 right after the artist was reçu into the Académie and began to step out of Watteau’s shadow.  At least four sketches for Winter are known today and all exhibit Lancret's seemingly effortless ability to depict his figures in spontaneous, natural poses.  Voluminous, sweeping fabrics fall softly on their bodies and capture light in a way that exudes movement and gesture from the figures.  His sketches, such as the one in red chalk depicting the central figure of Winter, are done in quick, broad strokes, emphasizing the folds and shadows of the costumes to render a dimensional, living figure beneath (fig. 1, now in the Musée des Beaux Arts, Bayonne, inv. no. 1654).  Additionally, a double-sided drawing by Lancret in the Graphische Sammlung im Städelschen Kunstinstitut, Frankfurt, includes sketches for the two figures on the far left of the sheet2 and a sketch for the seated woman reading at center right is in the Musée Carnavalet, Paris.3 In 1730, the set of Four Seasons was engraved, with each season completed by a different printmaker.  The engravings were published in the Mercure de France and widely distributed, spreading Lancret's name and reputation beyond France, as well as popularizing the compositions.  Since the late 19th century, Winter has only been known through Jean-Philippe Le Bas’s engraving (fig. 2).  Two of the other paintings in the set, Spring and Summer, are now in the State Hermitage Museum in St. Petersburg (figs. 3 and 4); Autumn was until recently in the collection of the Homeland Foundation at Wethersfield House in Millbrook, New York, which was formed by the American collector Chauncey Stillman (fig. 5).  The four paintings had remained together through the Vigny sale in 1773 (see Provenance). In addition to its allegorical subject of Winter, the painting is one of the earliest known depictions of a Régence interior. Following the death of Louis XIV in 1715, the Baroque style associated with the King's regime fell out of favor with the aristocracy, who shifted their taste towards more intimate settings after the turbulence of his reign.  Much of society moved from Versailles back to town houses in Paris (and even more so following the court's movement to the Palais Royal).  Interiors were decorated with a more harmonious, feminine style featuring curved lines, damask fabric wall panels, and delicate, airy furniture (which evolved into the playful, Rococo style of interior design that was popular during Louis XV's reign). Lancret's drawing room in Winter shows a home in transition between eras: the stiff backs of the chairs and heavy tapestry that covers the table echo the previous Louis-XIV style, while the wall hangings, sinuous picture frames and curved lighting elements embrace the new Régence look.

A NOTE ON THE PROVENANCE:
Lériget de la Faye was a highly regarded French diplomat with a military background who spent time in London, Genoa and Rome.  He was a member of the court of Louis XIV and served as a special adviser to the King, but was also a connoisseur of the arts and thus transitioned from his previous diplomatic life to the cultural and literary world of Régence Paris quite naturally. Lériget notably had a close friendship with the comtesse de Verrue (1670 - 1736), one of the most esteemed and influential art collectors in Paris at the time (and through whom he was likely introduced to Lancret). Lériget amassed a large and important art and book collection, enjoyed theater and ballet, and wrote poetry.

In 1717, Lériget purchased a grand house on the rue de Sèvres; two years later he acquired two other homes nearby and connected them to create a substantial hôtel in which to house his growing collection and host fellow art enthusiasts. Upon entering, his esteemed visitors were led through a series of themed rooms, each housing a different area of his collection: Chinese porcelain, antique and modern bronzes, terracotta sculptures, and finally the paintings, the collection for which he was best known.  Ultimately, they found themselves in the grand salon, which opened onto the garden. At his death, Lériget's house was filled with around 250 paintings; according to Rochelle Ziskin, the only works which can be definitely placed in a particular room were Lancret's series of seasons, which were set into the paneling at the end of the celebrated Salon.4

Lériget's support of the young Lancret was immeasurably important to the artist’s early career.  Indeed, in his biographies of members of the Académie, D’Alembert described Lériget as “a man of taste,” preferring “the masterpieces of a virtually unknown painter to a mediocre painting by a celebrated artist.”5 According to Lancret's friend and biographer Ballot de Savot, Lériget was so impressed when Lancret brought him the second painting of the set of seasons that he decided to pay the artist double the price they had originally agreed upon.6

After Lériget's heir sold the pictures, they entered the collection of the architect Pierre Vigné, called Vigné de Vigny, and were sold as one lot in his 1773 sale to the art dealer Louis-François Mettra; at some point thereafter, they were separated.  Spring and Summer were acquired by the Empress Catherine the Great of Russia via the dealer Klostermann in 1782 and remain in the State Hermitage Collection.  The location of Autumn during the 19th century is unknown, but it was recorded in the collection of Baron Edmond James de Rothschild (1845-1934) by 1924 and was sold by his daughter in 1971.

By the 1880s, Winter was in the collection of the leading copper industrialist Pierre-Eugène Secrétan (1836-1899), who famously donated 60,000 kilos of copper sheets to make the Statue of Liberty in the 1870s.  After the copper crash in 1889, Secrétan staged an elaborate sale of his extensive art collection with the gallerist Charles Sedelmeyer, producing catalogues in French as well as English in order to attract both local and American bidders. This was the last public appearance of Winter until now; it was purchased by a private collector in the auction and has remained in his family's collection until the present day.

We are grateful to Mary Tavener Holmes for her assistance with the cataloguing of this painting.