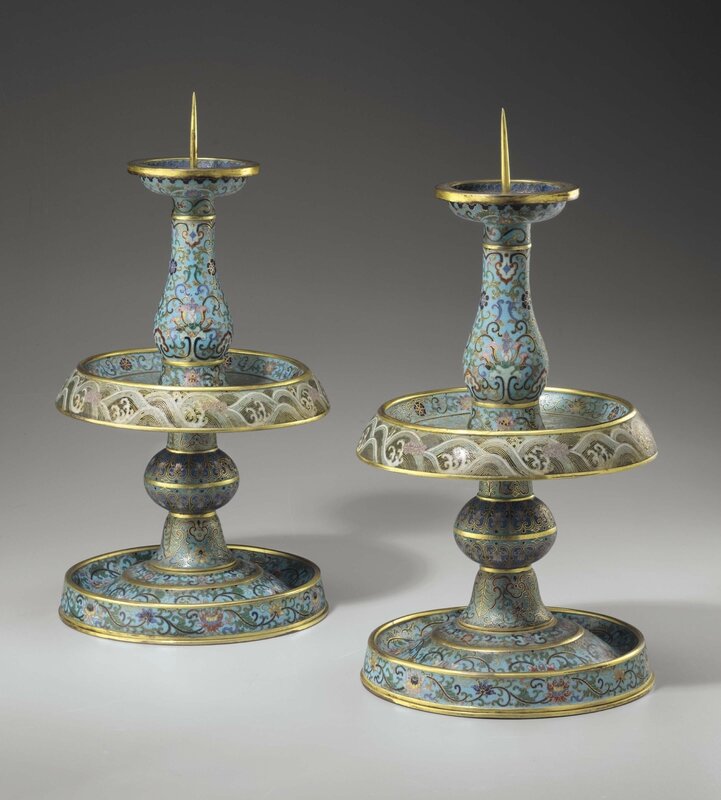 Each candlestick has a slightly domed disk base superbly enameled with lotus scroll on a bright turquoise ground encircling a smaller band of stylized flowerheads around the central baluster-form shaft decorated with bands of detached flowerheads, foliate scrolls and pendant and upright petal lappets supporting two drip-pans, the larger inscribed with an imperial poem followed by a bingwu cyclical date corresponding to 1786, succeeded by two seals, Guxi tianzi and Youri zizi.

Provenance: The O’Rourke-Palmer Collection, Ireland, acquired in 1968 and thence by descent.

Note: The two seals following the poems may be loosely translated as "the Son of Heaven in his 70s" and "working diligently day after day."

The drip-pans of these extremely rare candlesticks are inscribed with a poem of five-character verse by the Qianlong Emperor, published in Qing Gaozong Yuzhi Shiwen Quanji (An Anthology of Imperial Poetry and Prose Composed by Gaozong of the Qing Dynasty), wuji, juan 29, p. 27, under the title, Ti hetianyu shuangyu xi (Inscribing the Khotan Jade Double-fish Washer). It expressed Qianlong’s antiquarianism taste as the double-fish motif is based on Han dynasty (206 BC-AD 220) prototypes.

A small group of Qianlong-marked porcelain candlesticks of very similar form are also inscribed with imperial poems, including a blue and white example in the National Palace Museum, illustrated in Special Exhibition of K'ang-hsi, Yung-cheng and Ch'ien-lung Porcelain Ware from the Ch'ing Dynasty, Taipei, 1986, p. 168, no. 141, and a pair of yangcai examples, illustrated in Stunning Decorative Porcelains from the Ch’ien-lung Reign, Taipei, 2008, pp. 96-97, no. 24. According to the palace records, on the ninth day of the second month of Qianlong ninth year, "a blue and white candlestick and an imperial poem were presented", followed by an imperial decree: "Send this candlestick to Tang Ying and ask him to make candlesticks of this form but with imperial poems inside drip-pans; let him work on blue and white version and send them over first and then make some yanghua examples" (see Zijincheng de jiyi: tushuo qinggong ciqi dangan [Memories of the Forbidden City: Illustrated Catalogue of the Qing Palace Records of Porcelains], Beijing, 2016, p. 193, no. 3). It is likely that the Qianlong Emperor also ordered the imperial workshops to add imperial poems to cloisonné candlesticks of the present type.