LONDON.- Phillips’ upcoming Evening Sale of 20th Century & Contemporary Art is poised to set the highest total for a London sale in company history. With 50 works of art spanning over a century, the sale is anchored by an outstanding group of Modern artists, comprising works by Henri Matisse, Pablo Picasso, Max Ernst, Marino Marini and Henry Moore. Star contemporary works include Rudolf Stingel’s Untitled, and Mark Bradford’s Helter Skelter I from the Collection of John McEnroe, 7-time Grand Slam Champion. The sale also represents an important group of German artists, offering Anselm Kiefer, Georg Baselitz, Albert Oehlen and Sigmar Polke, among others. Expected to realise in excess of £51 million, the 20th Century & Contemporary Art Evening Sale will take place at 7pm on 8 March and will be followed by the Day Sale on 9 March, which will feature 181 lots.

Dina Amin, Senior Director and Head of 20th Century & Contemporary Art, Europe, said, “Our global team has worked to create a sale that is the most impressive offering of 20th Century & Contemporary Art seen at Phillips London to date. The sale begins with a landmark sculpture from Matisse’s oeuvre, ‘Nu allongé I (Aurore)’, executed in 1907-08, and follows through to a stunning 2012 work by Rudolf Stingel. We are particularly excited to bring to auction Mark Bradford’s ‘Helter Skelter I’, from the Collection of John McEnroe. Further private collections that Phillips has been entrusted with this season include a selection of Modern works from the Collection of Betty and Stanley Sheinbaum, the Collection of Blake Byrne, Los Angeles, and the Triton Collection Foundation.”

The sale is led by Pablo Picasso’s La Dormeuse, an extraordinary large-scale portrait of the artist’s muse Marie-Thérèse Walter. Executed during an important creative surge in 1932, La Dormeuse remained in Picasso’s own collection until the end of his life, when it was inherited by his widow, Jacqueline Roque, and subsequently by her daughter. Picasso’s so-called annus mirabilis, 1932, as well as Marie-Thérèse, will be the focus of the first ever solo Pablo Picasso exhibition at Tate Modern: Picasso 1932 – Love, Fame, Tragedy, which opens to the public on 8 March, the day of Phillips’ Evening Sale. La Dormeuse sits in meaningful dialogue alongside Matisse’s Nu allongé I (Aurore). Picasso’s immediate response to Nu allongé I (Aurore) has often been noted in the series of abstract nudes with raised elbows and twisted poses that he first made in 1907, as the twos titans of Modern art continued to embrace similar themes in response to each other’s work throughout their careers. The sculpture, an early lifetime cast, exemplifies the same sinuous pose that goes on to feature in a string of masterpieces that are now housed in museum collections throughout the world. Having been in a French private collection for almost seven decades, Nu allongé I (Aurore) has not been seen in public since it was last exhibited at the Montross Gallery, New York in 1915. 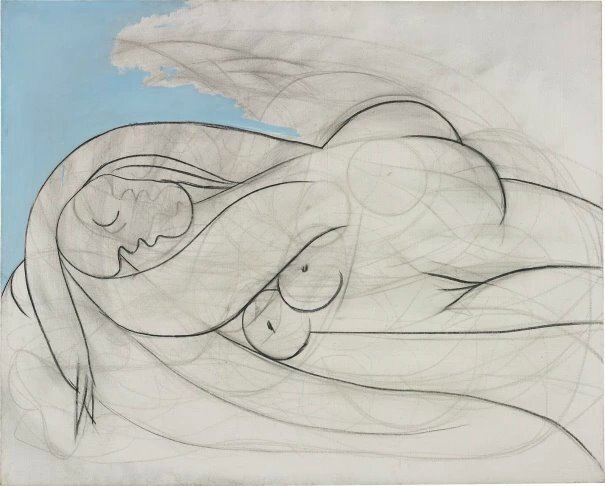 Further Modern highlights include two works by Max Ernst, one of the most important Surrealist artists. Colombe blanche, 1925 (estimate: £350,000 - 500,000) and Le Surrealisme, 1942 (estimate: £350,000 - 450,000), both reveal Ernst’s crucial involvement with some of the writers associated with Surrealism. Colombe blanche was initially owned by the poet Paul Eluard, and then by Roland Penrose, while the title of Le Surrealisme et la peinture was taken from André Breton’s 1928 essay of the same name and is a study for the celebrated oil painting of the same title, housed in the Menil Collection in Houston. 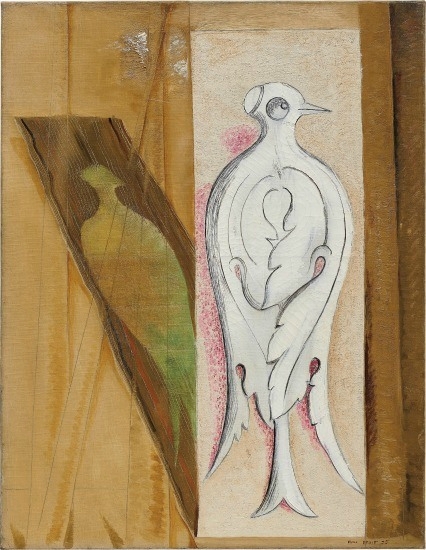 The leading contemporary work of the sale is Untitled by Rudolf Stingel, an artist Phillips has a long-standing history of championing. Untitled is one of only twelve electroformed copper, plated nickel and gold panels created by the artist in this size. Hailing from Stingel’s seminal investigation into graffiti during his iconic installations at the Museum of Contemporary Art in Chicago and the Whitney Museum in New York in 2007, the artist produced the present work by casting panels from the incised gallery walls, electroplating them in copper and sealing them with gold. Viewers were invited to scratch, write and mark the surface at will, their individual traces accumulating into a mass of anonymous marks. Exploring the notion of authorship, Stingel physically engaged his audiences allowing the public to become the artist en masse, creating an artwork which captured hundreds of voices. 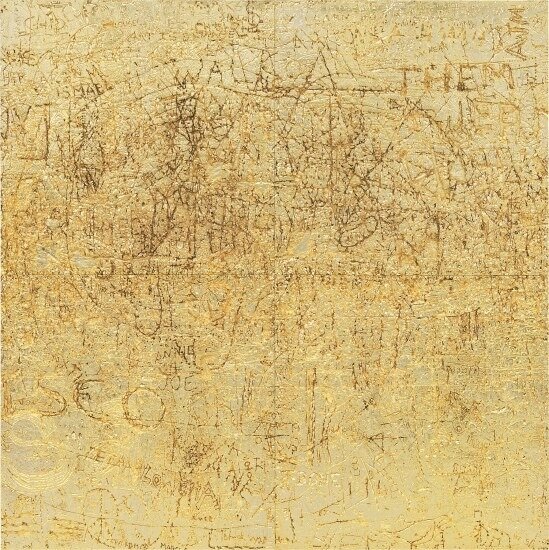 Works by Post-War German artists include Anselm Kiefer’s Die Meistersinger, executed in 1981 - 1982 (estimate: £1,500,000 - 2,000,000). Die Meistersinger epitomises Kiefer’s critical engagement with collective German history and mythology, an enduring subject borne out of his personal experiences. In the 1980s the question of politics and art burgeoning in Germany began to disseminate through crucial international exhibitions including the seminal Zeitgeist exhibition at the Martin-Gropius-Bau in Berlin in 1982, curated by Sir Norman Rosenthal and Christos M. Joachimides. Die Meistersinger was included in this defining exhibition and later included in Kiefer’s first retrospective in the US in 1987 to 1989 which toured from The Art Institute of Chicago to the Museum of Modern Art, New York. Hailing from the same important private collection is Sigmar Polke’s Untitled from 1989 (estimate: £800,000 - 1,200,000). Depicting an otherworldly figure set against a rich ground, P.D. Idol is one of five paintings that comprises Cologne painter Georg Baselitz’ Idol series from 1963-1964 (estimate: £1,500,000 - 2,000,000). Painted at a critical moment in Baselitz’ career, when he first garnered international acclaim, P.D. Idol incorporates the central concerns of the artist’s early painterly practice and his exploration of the burden of culture and identity, and anticipates his acclaimed Heroes paintings made in the following year. 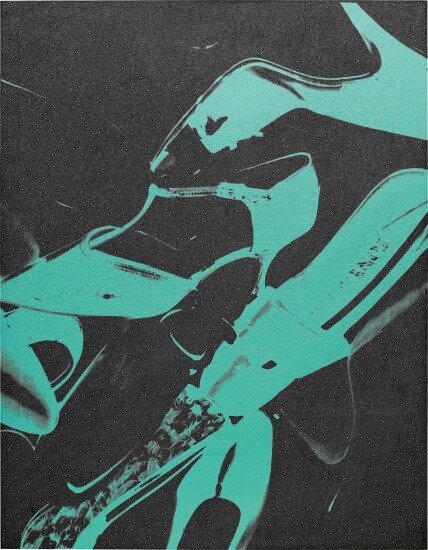 Profil Genre Azteque is an historic early painting by Jean Dubuffet. The picture was dedicated and given to his friend, the famous author and member of the French Resistance Jean Paulhan on the first New Year’s Day following the end of World War II. Profil Genre Azteque featured in Dubuffet’s second exhibition, when he showed a group of Hautes Pâtes, works sharing the heavy, incised impasto visible here. The work was later included in Kirk Varnedoe’s landmark exhibition High and Low: Modern Art and Popular Culture at the Museum of Modern Art, New York in 1990. This painting has a rich sense of materiality that complements the titular profile, which has been scrawled on the surface with a frenetic energy that speaks of the energy of graffiti and the street as well as timeless cave paintings and the art of the insane. Profil Genre Azteque has been owned by a string of high profile collectors since it was painted over seven decades ago, including Larry Aldrich, Sir Edward Hulton and Dieter Hauert. Of the works from the Collection of Betty and Stanley Sheinbaum is Marino Marini’s Piccolo Cavaliere, 1949 (estimate: £400,000 - 600,000). Marini’s painstaking manual labour is clearly evident within this sculpture, which has been hand chiselled and given a variegated patina to create a textural and unique finish. Piccolo Cavaliere was purchased by Los Angeles collector Betty Sheinbaum from famed art dealer Eric Estorick in 1958, and remained in the prolific collection until today. Phillips wishes to thank the Fondazione Marino Marini for their expertise and help with cataloguing this work. This work is recorded in the archives of the Henry Moore Foundation.

Coming from the Collection of Blake Byrne, Los Angeles is The Pilgrim, 2006, an enigmatic work by Marlene Dumas (estimate: £1,500,000-2,000,000). The Pilgrim was exhibited for the first time in the exhibition Man Kind at Galerie Paul Andriesse in Amsterdam in 2006. It was then not only shown in Dumas’ acclaimed retrospective exhibition that travelled from the Museum of Contemporary Art, Los Angeles, to the Museum of Modern Art, New York, and the Menil Collection, Houston, in 2008 and 2009, it was also included in the extraordinary exhibition Tronies-Marlene Dumas and the Old Masters at Haus der Kunst, Munich, in 2010-2011.