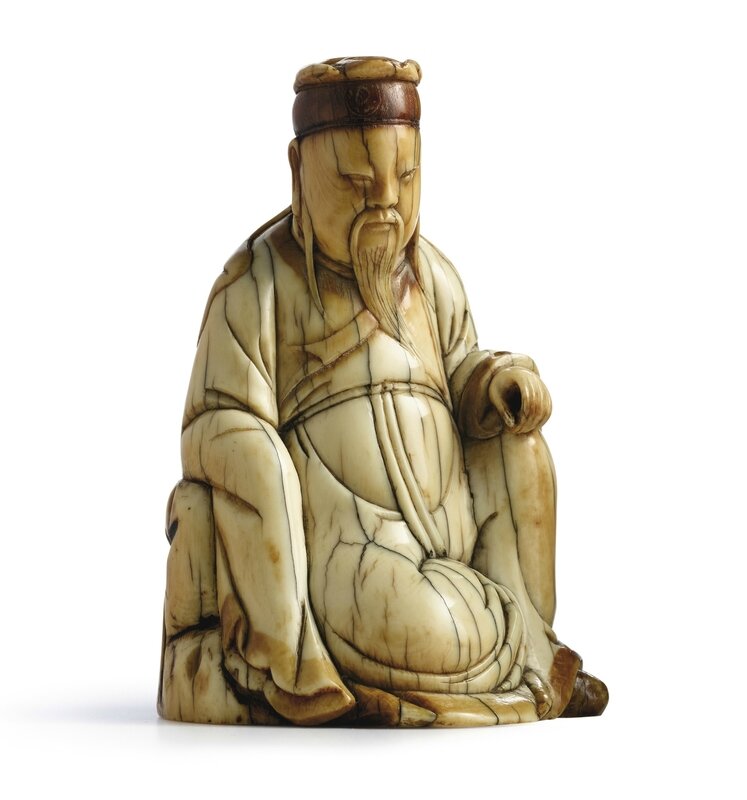 the patinated ivory of variegated creamy-brown tones, carved in the round as a seated man with a long beard and moustache, his right elbow leaning against a rocky outcrop while his left hand rests on his raised left knee, wearing loose-fitting robes tied around his stomach with a sash and a cloth hat with two long ribbons falling onto his shoulders, the ribbons and the hems of the robes stained brown.

Note: Skilfully carved in the round, this figure is a fine example of ivory carving as seen in the sensitively modelled face and gentle folds of the robes of this figure. Figures of this type may have been created in the ivory workshops of Zhangzhou, Fujian province, where small carvings of deities, immortals or auspicious images were popular and in great demand by both domestic and foreign traders. With its emphasis on long vertical lines, it suggests it was inspired by contemporary woodblock prints. See illustrations of various immortals from the late Ming edition (c.1600) of the Lixian quanzhuang (‘The Complete Biography of the Assorted Immortals’), included in Derek Gilman, Chinese Ivories from Shang to Qing, London, 1984, figs 11-14.

The cloth hat worn by this figure, with its trailing ribbons, suggests that he may be a Daoist figure; compare a similarly clothed and bearded figure, identified as Zhongli Quan, illustrated ibid., p. 66, no. 45; and two carvings of Dongfang Shuo, included in the exhibition Chinese Ivories from the Kwan Collection, Art Gallery, The Chinese University of Hong Kong, Hong Kong, 1990, cat. no. 32, depicted wearing a similar putuo hat and long robe tied at the waist, and cat. no. 53.