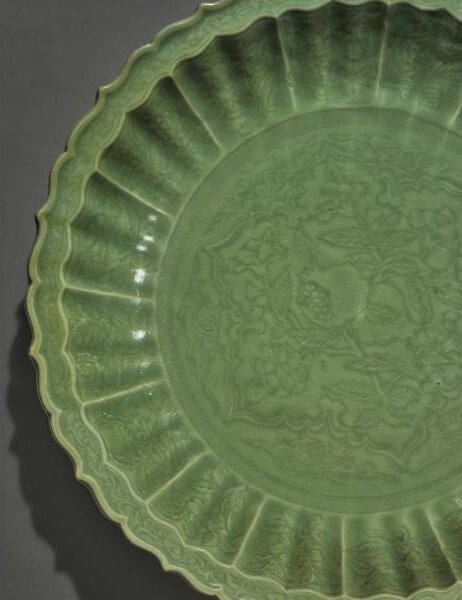 sturdily potted, the shallow, widely flared sides rising from a tapered foot, alternately lobed and barbed inside and out into sixteen brackets, finely carved to the center with a pomegranate tree bearing two large fruits, one split to reveal the seeds within, and issuing blooming floral buds, all framed within a barbed hexafoil medallion and pairs of intertwined leaves, each of the barbed panels at the cavetto enclosing a floral spray, with a continuous lingzhi scroll encircling the lipped rim, the underside of the rim similarly carved with a leafy scroll above further floral sprays, covered overall with an even translucent glaze of soft sea-green tone with the exception of the wide ring on the recessed base burnt russet in the firing.

Note: Highly impressive in its size, yet exquisite in its very rare decoration, this dish is a true masterpiece. With its superior craftsmanship it stands out among other Longquan dishes known from the early Ming dynasty (1368-1644) and may have been specially commissioned by the court as an imperial gift to an important foreign potentate. No other large dish with this design appears to be recorded.

The fine quality of the glaze and carving, and the crisp molding are characteristic traits of Longquan’s best early Ming productions. Shards of similar dishes have been found at Longquan excavation sites in Zhejiang province, which have been identified as imperial Ming dynasty kilns. Particularly the Fengdongyan kiln site at Dayao in Longquan has yielded many dish fragments revealing similar strong bodies of fine quality, usually carved with intricate decorations very similar to those found on blue-and-white and underglaze-red wares of Jingdezhen. Of such large size, fine quality and sophisticated pattern, these fragmented pieces were clearly unlike the regular Longquan ware meant for daily use.

Officially, Longquan began its manufacture of imperial ware in the 26th year of Hongwu (1394, r. 1368-1398) and continued until the 1st year of Chenghua (1465). During this period, Longquan production was under close court supervision. Only the best pieces survived, while the rest was smashed to pieces. The prefectural city of Huai’an in Jiangsu province appears to have been a center where the ultimate selection of court-commissioned Longquan ware took place. It was the seat of the Director-General of Water Transport at the time and the location from where the successfully completed pieces were transported via the Grand Canal up to the capital.

Large-sized vessels, such as the present dish, commissioned by the court, were predominantly made to meet foreign taste. They played an important role in the emperor’s control of foreign trade and tributary relations. Upon his ascension to the throne in 1368, the Hongwu Emperor ordered that foreign diplomatic and trade contacts should be conducted through official government channels only, in the form of a tributary system. Further into his reign, these initial regulations became considerably less strict, as evidenced by the many Longquan pieces found outside China. The Longquan kilns, spreading over a large part of Zhejiang province and even further into the neighboring province of Fujian, were indeed conveniently located to reach the trade ports of Wenzhou and Quanzhou from where the merchandise could be shipped to foreign markets in the Far East, Southeast Asia and India, the Middle East and even as far as Africa.

The Ottoman court in Istanbul was particularly keen on the rich, lustrous green glaze of celadon and the large size of the vessels suited Middle Eastern eating habits perfectly. Highly treasured, the best pieces were strictly reserved for the sultan and for special occasions. Valued and prized, they were offered as part of their princesses’ dowries or as rewards for outstanding services.

Representations of pomegranates, fertility symbols both in China and in the Middle East, from where the tree reportedly had been introduced to China, are popular wedding presents. The composition of pomegranates in the center together with various flower motifs at the well, displayed on the present dish, is very rare. Pomegranate designs on dishes are unusual. Compare two excavated dish fragments unearthed in Longquan, in Ye Yingting and Hua Yunong, Faxian: Da Ming Chuzhou Longquan guanyao [Discovery: Imperial ware of the great Ming dynasty from Longquan in Chuzhou], Hangzhou, 2005, p. 251 and p. 280, as well as dishes and dish fragments incised with a variety of other designs, pp. 240-251 and pp. 272-283. The pomegranate design is otherwise known on upright vessels such as a yuhuchun vase in the National Palace Museum, Taipei, illustrated in Tsai Mei-fen, ed., Bilü – Mingdai Longquan yao qingci /Green – Longquan Celadon of the Ming Dynasty, Taipei, 2015, no. 58.

The decoration of various flower motifs at the well is extremely rare. Only chrysanthemum sprays appear to be known, as on the large dishes with different fruit and flowering plant designs in the center, illustrated in Regina Krahl, Chinese Ceramics in the Topkapi Saray Museum, Istanbul, London, 1986, vol I, nos. 233-9. The dishes and fragments excavated at the Fengdongyan kiln site at Dayao in Longquan, Zhejiang province, are similarly decorated with solely chrysanthemum sprays, encircling a variety of incised patterns in the center, see Longquan Dayao Fengdongyan yaozhi chutu ciqi [Porcelains excavated from the Fengdongyan kiln site at Dayao, Longquan], Beijing, 2009, pp. 55-62.

Although Longquan patterns were closely linked to those of Jingdezhen, blue-and-white or underglaze-red counterparts of the present dish are yet to be discovered. Compare a blue-and-white dish of similar size excavated from the Hongwu stratum at the Imperial kiln site at Dongmentou, Zhushan, Jingdezhen, now in the Palace Museum, Beijing, with a design of different flower sprays, but with a central painting of peony included in the exhibition Mingdai Hongwu Yongle Yuyao Ciqi/Imperial Porcelains from the Reigns of Hongwu and Yongle in the Ming Dynasty, Beijing, 2015, cat. no. 20 and a somewhat larger underglaze-red example, cat. no. 21. Another blue-and-white dish in the National Palace Museum in Taipei with a chrysanthemum design in the center and lotus sprays at the sides, was included in the exhibition Lanbai Huiying. Yuan cang Mingdai qinghuaci zhan/Radiating Hues of Blue and White. Ming Dynasty Blue-and-White Porcelains in the National Palace Museum Collection, Taipei, 2016, cat. no. 6.