An exceptional gilt-bronze figure of Manjushri, Yongle mark and period (1403-1424)

An exceptional gilt-bronze figure of Manjushri, Yongle mark and period (1403-1424) 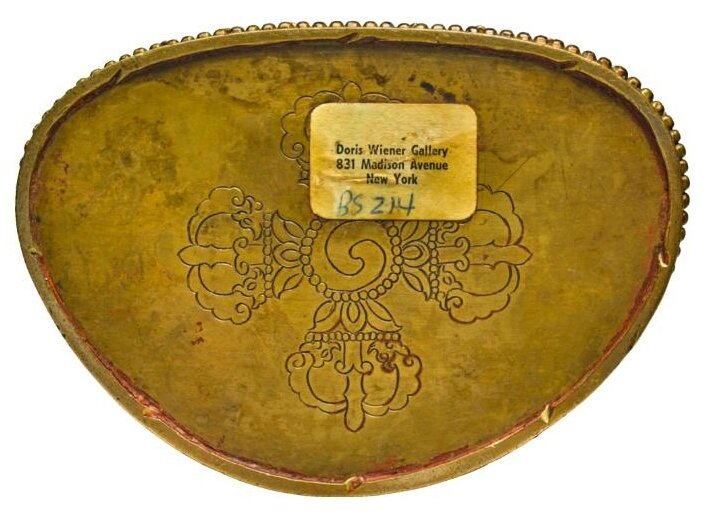 superbly cast in rounded fleshly volume, the bodhisattva seated in dhyanasana on a double-lotus pedestal, the arms raised in dharmachakra mudra to the chest, holding two stalks of uptala lotuses rising up the shoulders and supporting a khadga and pustaka, the gracefully swaying figure wearing a dhoti falling into elegant pleats, draped with a celestial sash around the shoulders and arms, the chest and the waist adorned by elaborate beaded necklaces, the face set with a serene and benevolent expression, with wheel-shaped earrings attached to the pendulous earlobes, surmounted by a five-leaf diadem around a high chignon, the lotus base incised with a reign mark reading Da Ming Yongle nian shi, the sealed base engraved with a double vajra.

Note: This outstanding figure of the bodhisattva Manjushri, the ‘Beautiful and Virtuous Lord’, represents a group of Buddhist figures made on the orders of the Imperial Court in China during the first half of the 15th century that displayed a style influenced by the art of Tibet. According to Ulrich von Schroeder in Indo-Tibetan Bronzes, Hong Kong, 1981, fifty-four Da Ming Yongle nian zhi works have been documented in Tibetan monastery collections, most of which are held in Potala Palace, Tibet (see Ulrich von Schroeder, Buddhist Sculptures in Tibet, Hong Kong, 2001, vol. II, pp 1237-91). These works have survived in Tibet due to imperial patronage lavished on Tibetan hierarchs and monasteries during the reign of the Yongle Emperor. The slim elongated lotus petals on the base of this piece are only seen on smaller Yongle works which average eighteen to twenty-two centimeters in height. Thus this group of figures are characterized by their delicate appearance, emphasized by the intimate size and exquisitely finished details.

Particularly fine for the gentle sway of the torso, which compliments the curves of the adornments to create a sense of movement, this figure reflects the Chinese taste of the early-Ming court. The well-defined waist and broad shoulders exemplify Indo-Nepalese traditions that were introduced into China during the Yuan dynasty and served as the foundation of the Sino-Tibetan style. Additionally, the craftsman has expertly fused the Tibetan love of ornamentation, seen in the luxurious jewelery, with the delicacy of detail, masterful casting, and the naturalism in style of China. Notably, while Tibetan figures were often embellished with inlaid semi-precious stones, these have been omitted in accordance with the aesthetic of the early Ming court.

Manjushri is the bodhisattva associated with the wisdom of Buddha and is commonly paired with Samantabhadra, the Bodhisattva of Compassion. The two bodhisattvas are important acolytes of Shakyamuni and are believed to have been historical figures, possibly disciples of the Buddha. Manjushri resides in the Five Peak Mountain, Wutaishan, and is on earth to save people from ignorance. It is believed that Manjushri was instructed by Shakyamuni to transmit his teachings and his residence, Wutaishan, became one of the major centers of pilgrimage for his followers.

The figure’s carefully rendered hands are held in dharmachakra mudra, the ‘Wheel of Dharma’. This mudra symbolizes one of the most important moments in the life of the Buddha: the occasion when he preached to his companions the first sermon after his Enlightenment in the Deer Park at Sarnath. The three extended fingers of the right hand represent the three vehicles of the Buddha’s teachings, namely the ‘hearers’ of the teachings through the middle finger; the ‘solitary realizers’ through the fourth finger, and the Mahayana, or ‘Great Vehicle’ through the little finger. The three extended fingers of the left hand symbolize the Three Jewels of Buddhism: the Buddha, the Dharma, and the Sangha. Stalks of lotus flowers emanate from his hands, from which rest the symbols of Manjushri, the sword (khadga), which has been heavily stylized and abbreviated, and the book (the Prajnaparamita). Together they symbolize the highest knowledge that is reached by overcoming ignorance and studying the highest book of wisdom.

A related figure of Manjushri of similar size and seated on a base with elongated lotus petals, but lacking the attributes, was sold in our London rooms, 5th November 2014, lot 41. Compare a larger figure of closely related form and attributes, but rendered with broader lotus petals on the base, included in the exhibition Lamaistic Art, Société Generale de Banque, Brussels, cat. no. 19, sold at Christie’s London, 16th April 1985, lot 300; and another sold at Christie’s Hong Kong, 26th November 2014, lot 3106. A related figure, but cast without the gentle sway in the back, from the J.P.H.Y. collection, is illustrated in Ulrich von Schroeder, Indo-Tibetan Bronzes, Hong Kong, 1981, pl. 144F. Figures of this type were also created in the succeeding Xuande reign; see one, with a Xuande mark and of the period, included in the exhibition On The Path to Enlightenment, Museum Rietberg, Zurich, 1995, cat. no. 68. 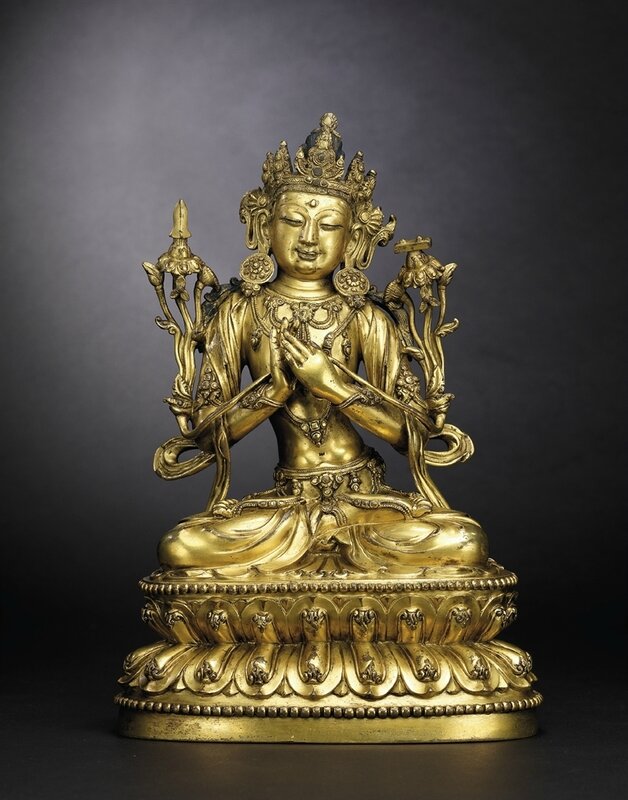 Cf. my post: An extremely rare gilt-bronze figure of Manjusri, Yongle incised six-character presentation mark and of the period (1402-1424)