The slender figure seated with right leg crossed over the left knee, with one finger of the right hand pensively touching the cheek, the left hand resting on the crossed leg and held in karanamudra, dressed in long flowing robes draping the lower body in soft pleats, the narrow face with contemplative expression surmounted by the large ushnisha, mounted on wood stand.

The pose, first conceived in India and later was transmitted to China, represents Maitreya in deep contemplation, while at the same time, because one foot is on the ground, he is ready to stand up and take his place as the buddha of the future. The karanamudra subdues negativity, dispelling impure thoughts and other obstacles to enlightenment.

The Northern Wei dynasty was a period of political turbulence and intense social and cultural change. During such tumultuous times a messianic figure such as Maitreya held great appeal and Maitreya was one of the most popular bodhisattva during this early phase of Chinese Buddhism.

This figure is similar to other figures of Maitreya from the Longmen caves dated to the Northern Wei dynasty. For other examples from the Guyang Cave see Osvald Siren, Chinese Sculptures in the Van de Heydt Collection, Rietberg Museum, Zurich 1957, pls. 11 and 12; and Longmen liusan diaoxiangji, 1993, pls.8-13. See a related figure sold by Eskenazi, Ancient Chinese Sculpture, June-July, 1978, no. 8; one from the Alsdorf collection acquired from Alice Boney, published Eskenazi, Ancient Chinese Sculpture from the Alsdorf collection and others, June 1990, no. 1; another formerly in the collection of the Albright-Knox Art Gallery, Buffalo, New York, sold at Sotheby's, New York, 20 March 2007, lot 503; and another Maitreya from the the collection of Robert Hatfield Ellsworth, sold Christie's New York, 17 March 2015 lot 14. 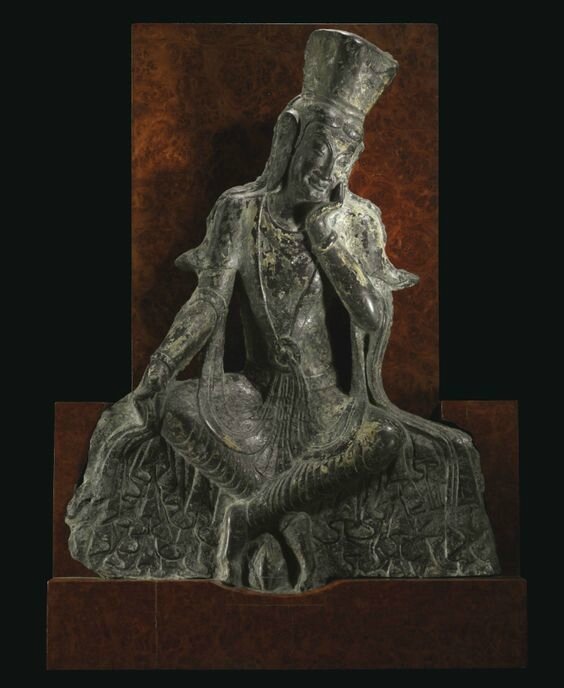 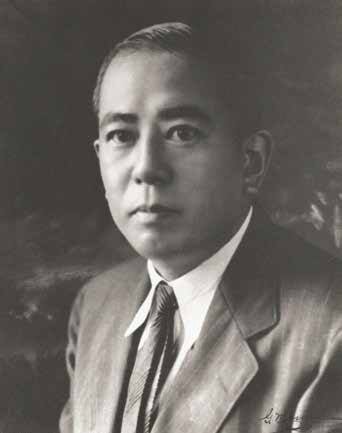 Hidenari Terasaki, the transcriber of Emperor Hirohito's famous Dokuhakuroku, sold Bonhams New York, Voices of the 20th Century, lot 1254, was a fluent English-speaking Japanese diplomat, married to an American, who on February 20 1946 assumed the special post of 'Liason Officer to the Imperial Household'. He had the responsibility of interpreting for Emperor Hirohito and advising him on his dealings with General Douglas MacArthur (Herbert P. Bix, "The Showa Emperor's 'Monologue' and the Problem of War Responsibility', The Journal of Japanese Studies, 18/2 Summer 1992), p. 357). Terasaki was an elite Japanese diplomat who played a pivotal role in relations between his country and the United States, first in 1941 and again in 1946. In 1931, Terasaki married Gwen Harold, an American from Tennessee, and following postings in Shanghai, Havana and Beijing, was appointed in 1941 head of Western Intelligence and transferred to Washington, where, despite his position, he is thought to have tried to make a desperate failed attempt to have a cable sent directly from President Roosevelt to the Emperor, appealing for peace. After Pearl Harbor, he, his wife and daughter Mariko were interned and then repatriated to Japan in 1942. He moved away from diplomatic life, living in a mountain village, often close to starvation, but after Japan's unconditional surrender, Terasaki was recalled to Tokyo and, with his experience, became the liaison between Emperor Hirohito and General MacArthur. Terasaki and his wife Gwen became a useful bridge between the two sides in these opening years of American occupation and they were visited by many of the senior American officers. Terasaki retired from his post in 1948 for health reasons, his wife and daughter returned to the US the following year. He died in Japan in 1951. Gwen wrote a biography of their life together, and a 1961 movie, Bridge to the Sun, took the book's name as its title. 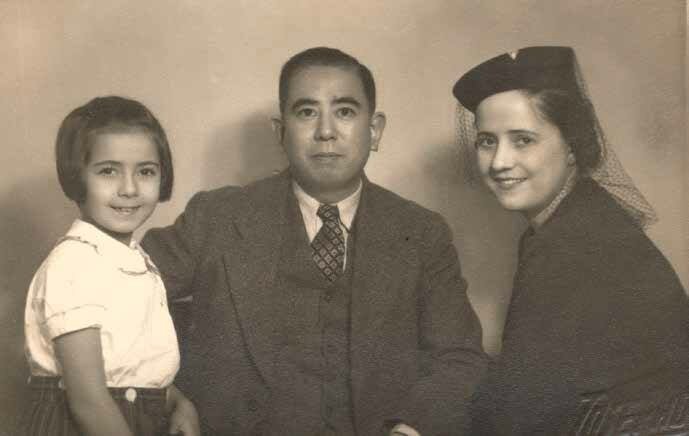 Hidenari Terasaki with his wife, Gwen and daughter Mariko.

The following two lots, figure of Maitreya (lot 8028) and the rare jun-type purple glazed bowl (lot 8029) were acquired by Terasaki sometime prior to 1941, when he was stationed in Shanghai and Beijing. The Maitreya is recorded in Gwen Terasaki Bridge to the Sun, Rock Creek Books, 2017, p. 204.