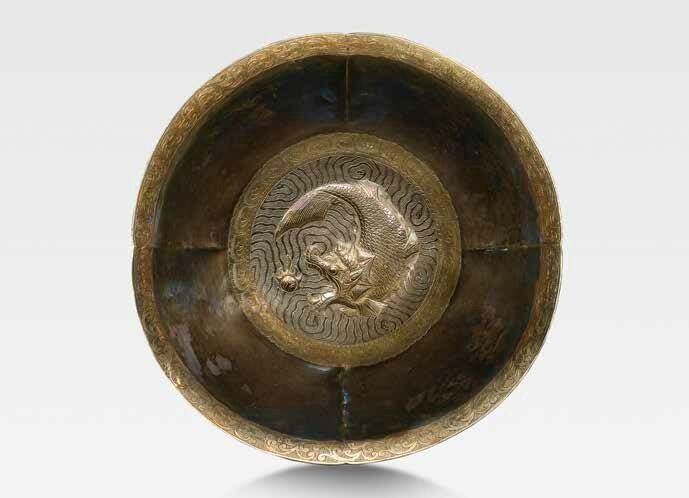 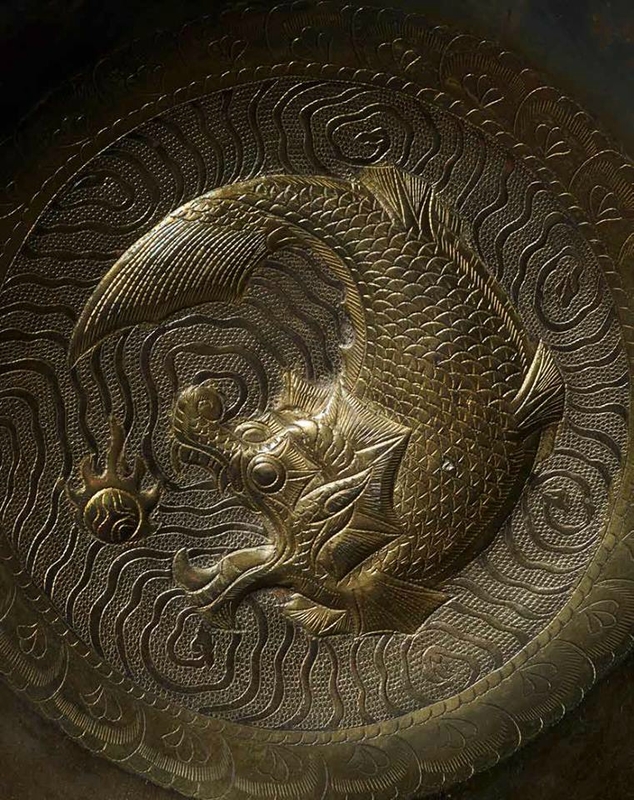 Finely worked in repousse with steep, quatrelobed sides, the rim interior banded and gilt with a continuous leafy scroll pattern about the central well enclosed by a band of overlapping 'peacock feathers' surrounding a fierce coiled makara in repousse chasing a flaming pearl amid stylized waves, the well and design also gilt and raised on a splayed, circular foot incised with a single character qiong and two indicipherable characters on the side and also on the base.

Note: With its distinctive curling snout, dragon head and finned body, the makara may be read as a representation of the mythical carp transforming into a dragon, a metaphor for success as a result of assiduous effort. However the origins of this mythical beast is traced to India and was transmitted to China with the Buddhist canon, the first datable appearance in the tomb of Li He (d. 583) in Shaanxi province. In the Buddhist tradition, the makara was originally a whale that rescued five hundred drowning merchants at sea, and then sacrificed itself by providing its own body for sustenance. As a result of its compassionate offering, the whale was immortalized and transformed into a makara, endowed with a dragon's head, fish fins and accompanied by a flaming jewel.

Its foreign background and imagery made the makara an auspicious symbol for use in several extant examples of Tang dynasty silver and gold. A Tang gold cup, excavated in 1983 in Xi'an and now in the Shaanxi History Museum is illustrated by C. Michaelson, Gilded Dragons, London, 1999, pp. 98-9, no. 59. while a similarly coiled makara with flaming pearl is illustrated by Bo Gyllensvärd in 'T'ang Gold and Silver', Butlletin of the Museum of Far Eastern Antiquities, No. 29, Stockholm, 1957, Fig. 56b. As noted in the Lally catalog, a Tang parcel-gilt silver bowl also with a repoussé dragon-fish in a central medallion was excavated from Inner Mongolia and is now in the collection of the Ordos Museum, illustrated in Zhongguo meishu fenlei quanji, Zhongguo jin yin boli falang qi quanji, Vol. II, Shijiazhuang, 2004, p. 47, no. 91. A n analogous gilt silver bowl decorated with a peacock feather band enclosing a repousse medallion of two flying parrots is published as part of the Kempe Collection in Bo Gyllensvard. Chinese Gold and Silver in the Carl Kempe Collection, no. 118, pp. 182-83. 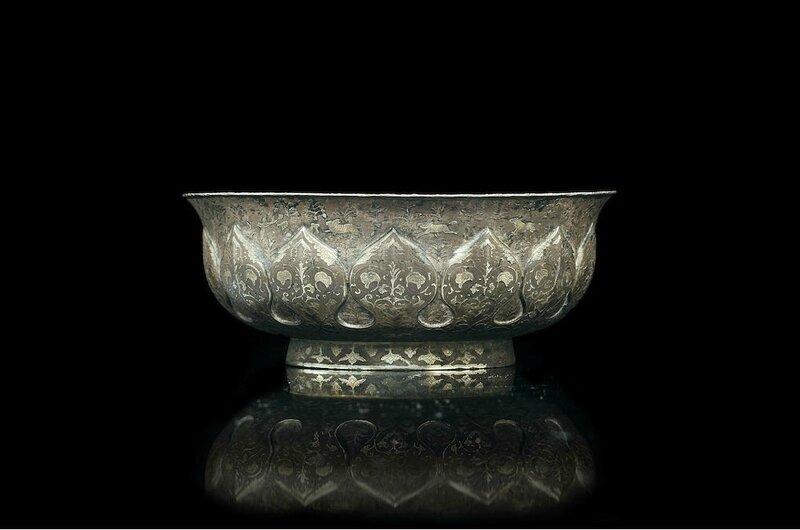 In his catalog entry, Mr. Lally speculates that the legible incised character on the side of the foot may be the name of the original owner.