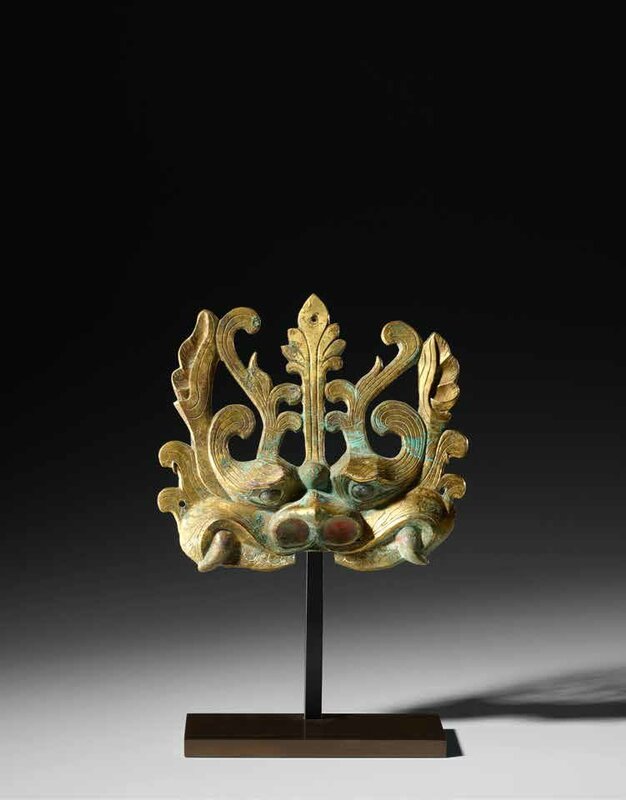 Cast in near symmetry, the zoomorphic mask framed by tall, thin ears flanking meandering horns above bulging eyes and a leaf-shaped ornament above the forehead, the snout with flaring nostrils, and an open mouth displaying curling fangs, the bronze gilded with areas of green patina, the mask punched with three holes to facilitate hanging.

Property from the Collection of Sally S. and Decatur H. Miller III

Note: Intended to bear a pendant ring, this gilt bronze mask (pushou 鋪首) would have been secured on the outer door of a palace or noble residence. Perhaps first appearing on the doors of the Xianyang palace of the Qin dynasty, pushou were frequently used on the inner chambers of tombs in the Han dynasty. The fierce visage is likely derived from the taotie mask motifs used on archaic bronze vessels, and with its bulging eyes, flaring nostrils, and hooked fangs it was intended to ward off evil spirits as well as unwelcome intruders. A similar pushou dated to the Northern Wei Dynasty is in the collection of the Museum of Fine Arts, Boston, accession number 1986.243. See also a closely related bronze mask, part of the Falk collection, sold Christie's, New York, 20 September 2001, lot 183.