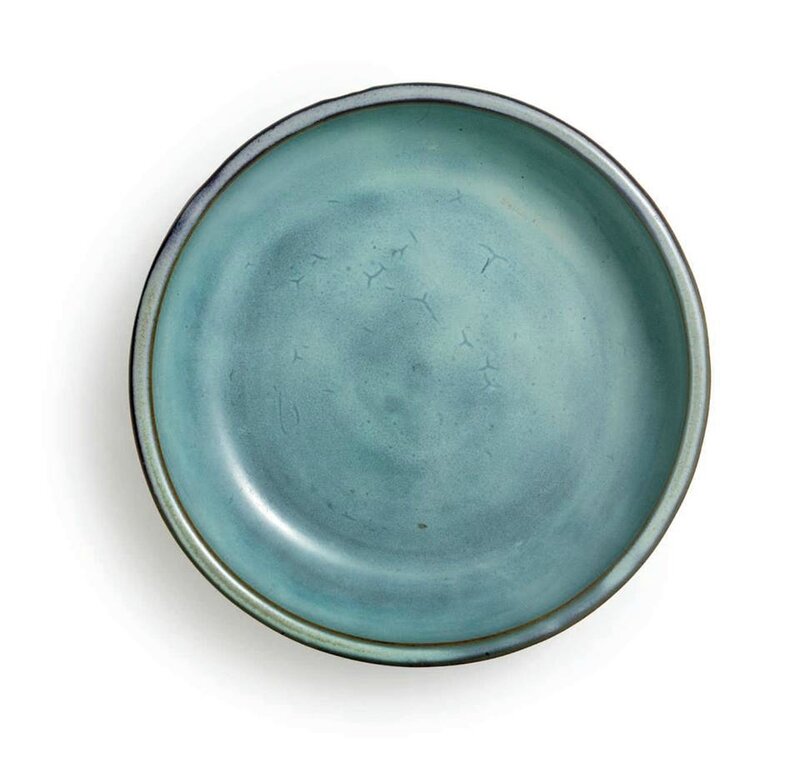 The sturdily potted bowl has a band of twenty 'nail-head' bosses applied between bow-string borders, and a further sixteen bosses above the threeruyi-form feet. The bowl is covered with a thick glaze, the interior of pale blue and lavender tone and the exterior mostly of mottled purple that thins to brownish-olive on the raised areas. The base has a thin brownish-olive glaze and a ring of spur marks revealing the grey body, and is incised with the character wu (five), Japanese wood box.

Literature: Christie's, The Classic Age of Chinese Ceramics: An Exhibition of Song Treasures from the Linyushanren Collection, Hong Kong, 2012, pp. 76-77, no. 23.

Note: The present bowl and the preceding jardinière (lot 541) belong to a group of Jun vessels comprising narcissus bowls, flower pots, and zun-shaped vases with prominent flanges, where each vessel has been incised or stamped with a Chinese numeral on the base. The numbers range from one to ten, and according to the Nanyao biji (Notes of the Nanyao), composed during the Qianlong reign, the numbers are indications that pair specific flower pots with stands. In recent years, scholars have also noted that the numbers appear to have a directly proportional relationship with the sizes of the vessels, with ten representing the smallest and one the largest. Jun narcissus bowls of this group appear in three styles, and are traditionally catalogued as ‘brush washers’, though the function of these bowls might well be stands of flower pots. The first style has a circular mouth rim with drum-nail bosses on the exterior, such as the present example. The second style has six-petal lobes, such as the ‘number nine’ example in the National Palace Museum, illustrated in A Panorama of Ceramics in the Collection of the National Palace Museum: Chun Ware, Taipei, 1999, p. 116-117, no. 41. And the third style has six molded bracket lobes at the flattened rim, such as the ‘number four’ bowl, also from the Linyushanren Collection, sold at Christie’s Hong Kong, 2 December 2015, lot 2812.