HAMBURG.- The Hamburger Kunsthalle is mounting Germany’s first large-scale monographic exhibition on the English painter Thomas Gainsborough (1727–1788), concentrating on his role as a pioneer of ›modern‹ landscape painting. Curated by the director of the Hamburger Kunsthalle, Christoph Martin Vogtherr, the show features some 80 exhibits, comprising around 40 paintings and 40 works on paper. The exhibition will feature works from leading collections in the UK, including the National Gallery, the Tate Gallery and the Victoria and Albert Museum in London as well as the Barber Institute in Birmingham, and also by the Staatliche Museen zu Berlin, the Bayerische Staatsgemäldesammlungen Munich and by private collections in Germany and the UK. The works on view include icons of British painting, such as Mr and Mrs Andrews and The Watering Place, which count among the most famous paintings of all time in the English-speaking world.

Thomas Gainsborough, born in Sudbury, grew up in Suffolk in south-eastern England, and the landscape there would leave a lasting mark on his art. He trained with French-influenced artists in London and undertook close studies of Netherlandish landscape painting. His art thus springs from a broad grounding in European art. Gainsborough experienced his breakthrough after moving to the fashionable spa town of Bath, where he became highly successful as a society portraitist. He later worked in London and was a founding member of the Royal Academy. Gainsborough much preferred painting landscapes to portraits. They provided a far better field for experimentation with highly innovative media and techniques, allowing him to continuously to develop his style. The artist picked up on the wave of experimentation that swept England in the eighteenth century, eventually elevating it to the standing of Europe’s leading economic and political force. At the same time, Gainsborough’s contribution helped to transform his country into a prime European centre for art.

Thomas Gainsborough: The Modern Landscape organises the presentation of Gainsborough’s landscape scenes into three chapters: Under the theme Rendering Reality, the exhibition compares and contrasts early works by Gainsborough such as Holywells Park with Netherlandish landscapes from the collection of the Hamburger Kunsthalle. This juxtaposition demonstrates how the artist learnt a great deal about composition, perspective and atmospheric representation from his Netherlandish colleagues, leading him to value landscape as a conveyer of mood. Like other English artists of the early eighteenth century, Gainsborough followed the European tradition closely and yet used it as a springboard for developing his own novel style. He was particularly interested in how humans relate to the landscape around them, in their close connection with and empathetic experience of nature, which found expression in the concept of the »sensibility«. The second chapter on The Social Landscape highlights how Gainsborough’s landscape art subtly reflected the major social upheavals of his day. What at first glance seem like bucolic scenes betray upon closer inspection signs of poverty and despair as the artist attempts in each picture to convey a subject and a new rendering for which no clear-cut formula had yet been invented. The increasing privatisation of common agricultural land during Gainsborough’s lifetime deprived large parts of England’s rural population of their livelihood, forcing peasants to migrate to the cities and hire themselves out as cheap labour. In a simultaneous development, ownership of large estates became a status symbol. Gainsborough addressed these trends from both the point of view of the propertied class and that of the newly impoverished. The rural exodus would become a central theme in his late landscapes, such as his masterpiece The Harvest Wagon. Technical advances during this era, chief among them the development of the steam engine and the inventtion of the mechanical loom, laid the groundwork for early industrialisation. The exhibition illustrates in the third chapter on The Creative Process how the ideal of innovation equally prevailed in English painting. Gainsborough’s landscape art became a kind of technological and intellectual laboratory: in an effort to achieve the desired effects in his drawings and to continually push the boundaries of the genre, he experimented with different media and techniques such as aquatint and soft-ground etching and even used skim milk washes or painted images on glass. One of these highly fragile paintings on glass is featured in the exhibition, Coastal Landscape with Sailing Ships. Originally presented in a kind of peep-show box the artist had constructed, in the exhibition the painting is lit from behind to recreate this experience. The exhibition builds on a long Hamburger Kunsthalle tradition of highlighting the era of major transformation around 1800 as the beginning of modernity in art, a tradition that began with the legendary cycle Art around 1800 launched by former director Werner Hofmann. As a complement to German Romanticism, which is well-represented in the Kunsthalle’s collection, and the French art of the period, the Gainsborough show thus presents England as a further centre of European landscape painting. 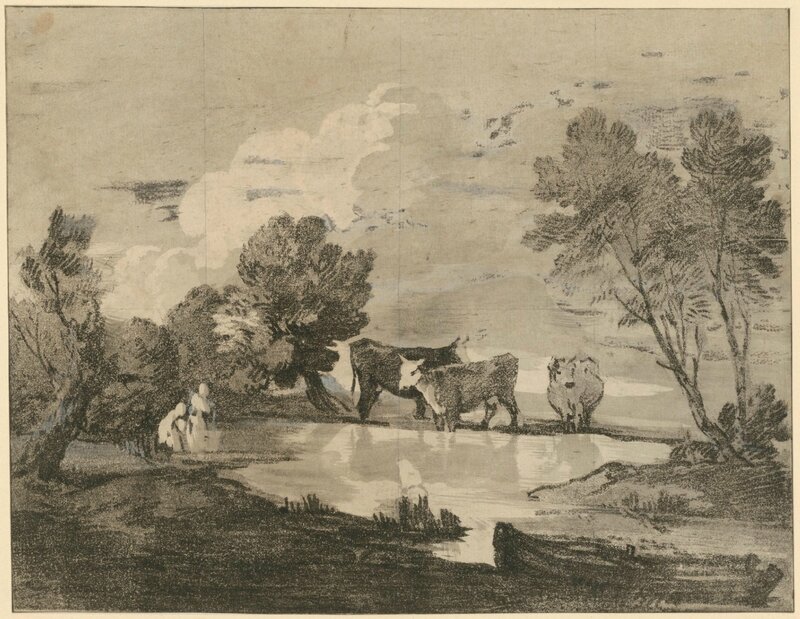 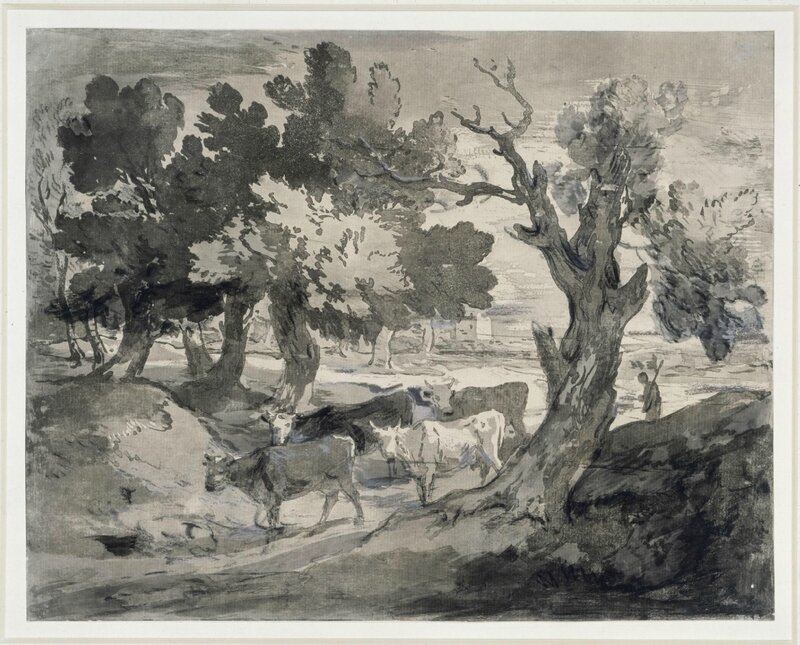