the rounded sides rising from a tapered foot to an everted rim, the interior with a bright yellow-enameled dragon writhing in lively pursuit of a ‘Flaming Pearl’ amidst flame scrolls and clouds, all within a yellow circle, the motif repeated with two dragons at the cavetto, and again around the exterior, the decoration all reserved against a richly mottled underglaze cobalt blue ground, the rim and foot white, the base with a six-character reign mark in underglaze blue within a double circle, coll. no. 1580.

Note: The present dish is a superlative example of type. The compelling contrast achieved between the luminous, evenly applied marigold-yellow enamel against the deftly applied layers of vivid sapphire-blue tones attests to the ability of the imperial kilns to satisfy the exacting expectations of the Imperial Household which extended to the present yellow on blue ground pattern ware assigned to concubines of the 4th rank. A related example in the Palace Museum, Beijing, is included in Qingdai yuyao ciqi, vol. 1, pt. I, Beijing, 2005, pl. 36; a pair of dishes is published in the Illustrated Catalogue of Tokyo National Museum. Chinese Ceramics, vol. II, Tokyo, 1990, pl. 579; and another is illustrated in Mayuyama. Seventy Years, vol. I, Tokyo, 1976, pl. 1047. See also a dish  sold in our London rooms, 6th December 1994, lot 222; another in these rooms, 15th September 2010, lot 244 and two sold in our Hong Kong rooms, the first, 11th April, 2008, lot 2917;and the second, 8th April 2011, lot 3138. 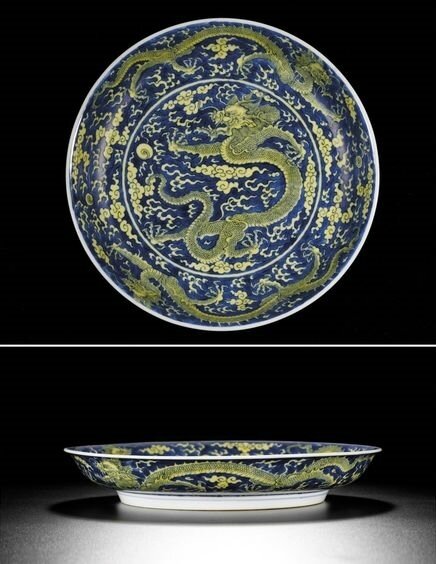