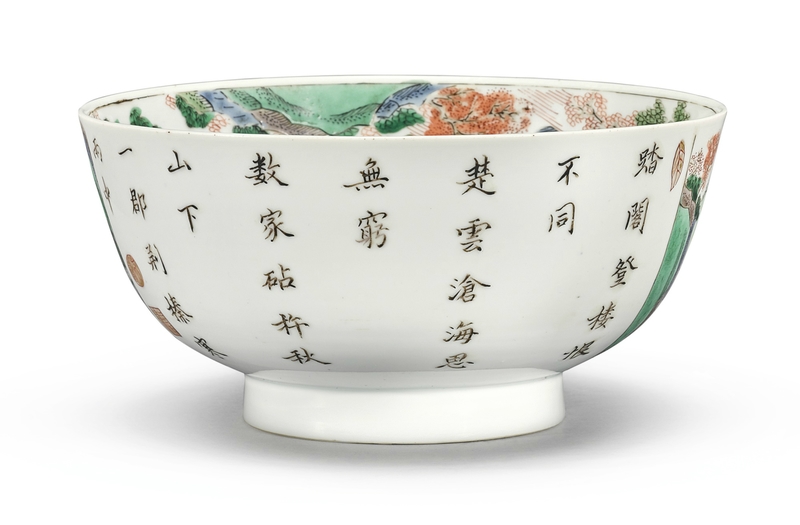 the deep rounded sides rising from a straight foot, the center of the interior painted with a small landscape vignette of a riverside hut under the red foliage of an autumn tree surrounded by verdant hills and blue bluffs, the motif repeated and expanded across the band encircling the interior rim, the exterior with a scholar sitting with a qin atop a cliff gazing at a similar seasonal landscape, peaks and crags near and distant in varying colors, the riverbank studded with resplendent trees, huts, and pavilions, a poem inscribed at the break in the landscape, the base with a fu mark in underglaze blue within a double circle, coll. no. 400.

Note: The painting and calligraphy on this bowl reference retirement. The poem, 'Climbing a Tower: To Councilor Wang', is by the Tang dynasty poet Wei Yingwu (737-791). In it he laments his separation from his good friend Wang Qing. The poem reads:

I hate climbing mountains and towers without you,
the clouds and sea of Chu and memories never end,
the sound of mallets at the foot of leafless hills,
in a prefecture of brambles and winter rain.
(Translation by Bill Porter, In Such Hard Times: The Poetry of Wei Ying-wu, Port Townsend, WA, 2009, p. 254-255.)

The poem is preceded by a leaf-shaped seal, and followed by a circular and square seal (both with illegible characters). Though the third and fourth characters of the poem have been changed on the bowl, the meaning remains consistent with the original poem, as translated above.

During the early years of the Kangxi period, the entirely respectable theme of retirement from imperial service was colored by issues of loyalty.  Many Ming dynasty scholars opted for exile over service to the new dynastic power whereas others readily accepted change. The device of transforming a two-dimensional painting with its inspirational poetic inscription into a three-dimensional functional object gained new aesthetic heights and favor during the period as a benign means to express the conflicting loyalties of the time.

Painting an artemisia leaf at the start of a poem and a seal at the end was a convention developed by ceramic artisans in the 17th century. It appears on the present example, as well as on the aforementioned bowl in the Jie Rui Tang Collection, on numerous 'poem and landscape' porcelains in the Shanghai Museum collection (ibid, cat. no. 110), and on vases such as lot 330 in this sale. The leaf and mark may be a device to enhance the 'literati' quality of the porcelain by imitating the distinctive seals used by artists, calligraphers, and collectors to mark their work.