A magnificent sancai-glazed pottery figure of a Bactrian camel and a foreign groom, Tang dynasty (AD 618-907)

A magnificent sancai-glazed pottery figure of a Bactrian camel and a foreign groom, Tang dynasty (AD 618-907) 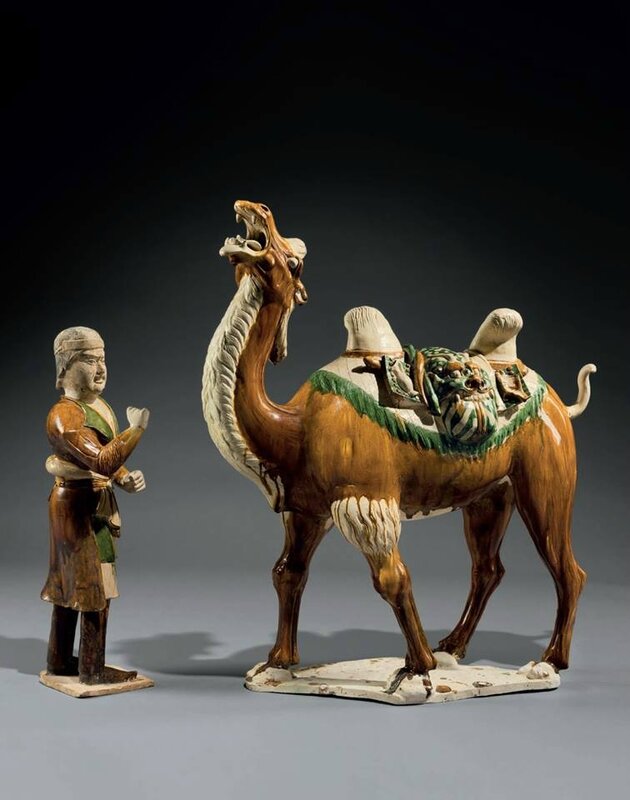 The amber-glazed camel is naturalistically shown striding, with the mane, tail, and two humps highlighted in cream glaze. The head arches strongly upwards with the mouth agape revealing long pointed teeth and the tongue. The camel’s back is laden with a bulging sack molded on either side with a large monster mask and various provisions including a ewer, all set on top of projecting pack boards and a fitted cream cloth scored with a diamond pattern and with a green tufted fur border. The foreign groom stands on a square plinth, his body slightly turned and his hands positioned to hold a rope. He wears a three-quarter-length coat with green lapels and his short, black-painted hair is bound with a leather strap.

Property from the Hall in Memory of Cypress (Jibo Tang)

Note: This massive and exceptionally handsome camel is a particularly fine example of the type of figure that was made to go in the tombs of the Tang elite in the first half of the 8th century. Such models, which would have been very expensive to purchase, provided an obvious indication of the wealth of a family. Not surprisingly, camels have been found among the burial items in a number of the Tang imperial tombs, as well as some of those belonging to other members of the Tang nobility. However, these models were not simply symbols of wealth, they were also symbols of the way that wealth might have been acquired through trade and tribute along the Silk Route. In the Tang dynasty, camels really did live up to the description of them as 'ships of the desert' and were used to transport Chinese goods, including silk across the difficult terrain of the Silk Route to the eager markets of Central Asia, Samarkand, Persia, and Syria. They may also be seen as symbolic of the cosmopolitanism of the Tang capital at Chang'an. They carried, on their return journeys, many of the exotic luxuries from the west that were desired by the sophisticated Tang court.

The two-humped Bactrian camel was known in China as early as the Han dynasty, having been brought from central Asia and Eastern Turkestan as tribute. Its amazing ability to survive the hardships of travel across the Asian deserts was soon recognized and Imperial camel herds were established under the administration of a special bureau. Camels were not only prized as resilient beasts of burden, their hair was also used to produce a cloth which was admired for its lightness and warmth.

Of the known examples of camels of this size and type, the one closest is the figure from Luoyang, Henan, illustrated in Zhongguo wenwu jinghua daquan - taoci juan, Taipei, 1993, p. 155, no. 534. The two figures share the same massive size, striding pose, exceptionally well modeled head with the mouth open in a bray, realistic depiction of the hair on the head, neck, haunches and humps, and coloration. The depiction of the packs on the two are also quite similar including the inclusion of a cream-glazed ewer. A similar ewer can also be seen on the similarly glazed figure of a striding camel of comparable size in the Asian Art Museum, San Francisco, which is shown with a groom, illustrated by W. Watson, The Arts of China to AD 900, New Haven/London, 1995, p. 233, no. 37. Another similar figure, in the British Museum, which has a reversal of the coloration of the present and the aforementioned figures from Luoyang, with the coat glazed cream and the hair glazed amber-brown, is illustrated in Sekai toji zenshu, vol. 11, Tokyo, 1976, p. 148, no. 136. This latter figure is very similar to one sold at Christie's New York, 20 September 2005, lot 191. However, the present camel differs from the comparable figures in the depiction of the fitted blanket. While the blankets of the other camels have the more usual pleated border and multi-colored decoration, the blanket of the present figure is scored with a diamond pattern under a plain cream glaze, while the border is depicted as tufts of fur and glazed green.