TURIN.- Giorgio de Chirico was born in Volos, Greece, in 1888, to Italian parents – his father was a civil engineer building the new railway lines in Greece. He lived in Athens, Munich, Milan, Florence, Paris, Ferrara, New York, and Rome, where he died in 1978. De Chirico is among the most important artists of the twentieth century. After studying at the Athens Polytechnic and at the Academy of Fine Arts in Munich, where he was influenced by the symbolist painting of Arnold Böcklin and the philosophical thought of Arthur Schopenhauer and Friedrich Nietzsche, de Chirico arrived in Italy in 1909.

In 1911, he spent a few days in Turin where the long shadows of the afternoon and the grid of streets, squares and arcaded galleries gave him the impression, as he wrote, that “the city was built for philosophical dissertations.”

The pioneer of an art in which the intellect dominates emotion and, with visionary originality, connects the philosophy of mythological Greece to the icy classicism of Nordic thought, de Chirico is the originator of metaphysical painting, whose enigmatic images, through a style characterized by sharp shadows and flat colors, refer to the suspension of time, immobility, the fragility of the consciousness, the inexpressible and the loss that are the grammar of dreams. This original style is the complex result of the profound philosophical, literary and figurative culture of the artist.

In Paris, de Chirico’s metaphysical canvases proved popular with the Surrealists, but when in the 1920s he focused his interests on painting technique and the Old Masters in Rome, in particular mythological subjects and landscapes, he was rejected by the avant-garde art world. Disregarding the criticism of his former admirers, the artist developed a growing interest in the theme of metamorphosis in the ancient world, for those enigmatic refractions of meaning that, before dissolving into nothing, suggest aspects of existence. 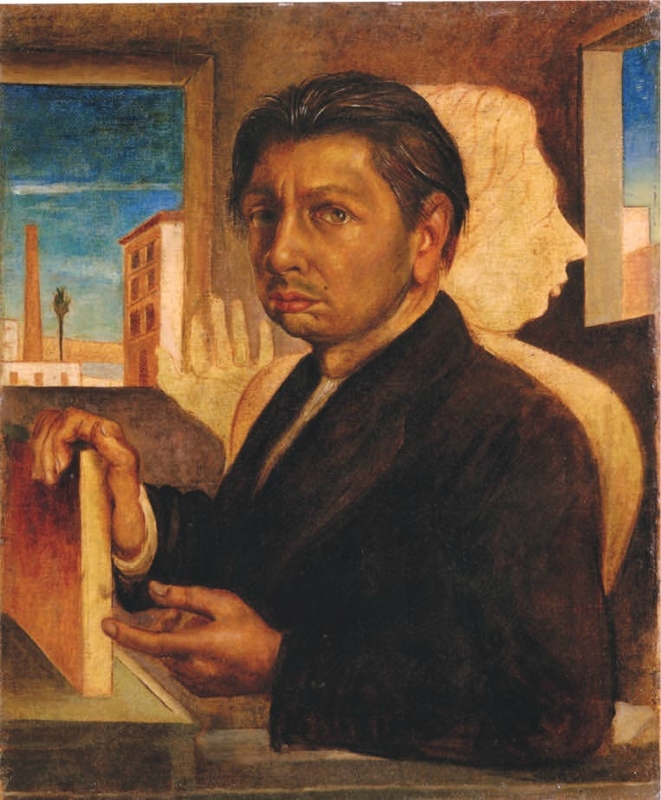 The exhibition Giorgio de Chirico. Major Works from the Collection of Francesco Federico Cerruti, features for the first time at the Castello di Rivoli, a group of important early works by Giorgio de Chirico from the collection of Francesco Federico Cerruti, offering public works which until now have remained hidden away in the private collection of Villa Cerruti in Rivoli. This residence was built by Cerruti, a Turin entrepreneur and industrialist, in the 1960s to house his private collection. According to de Chirico himself, Turin, the place where Nietzsche’s madness exploded, is among the Italian cities that inspired the first metaphysical paintings and their melancholic atmospheres. Featuring works ranging from 1916 to 1927, the exhibition at Castello di Rivoli presents eight important paintings by the pioneer of metaphysical art. Offering a glimpse of the metamorphic capacity of de Chirico’s genius, this exhibition investigates his intellectual heritage by showing his paintings in connection with some of the major contemporary artworks of Castello di Rivoli’s permanent collection, such as installations by Giulio Paolini, Michelangelo Pistoletto and Maurizio Cattelan.

An artist whose personal memories intertwined with classical myths and philosophy, de Chirico in his continuous research – which included the freedom to quote himself and not to stop at a single style, as well as poetry and novel writing – embraced many artistic metamorphoses to respond to the claims of modern progress, resisting its rationality and fascination for technology.
In keeping with the spirit that characterizes the Cerruti collection and its eclectic vision, which ranges from medieval paintings with gold leaf backgrounds to contemporary art, Giorgio de Chirico. Major Works from the Collection of Francesco Federico Cerruti proposes a brand-new journey through time, establishing a link between the works of de Chirico and some of the key pieces of contemporary art in the museum’s permanent collection.

Set within the baroque castle, where the past continuously renews its encounter with the present, the exhibition comprises a series of dialogues between paintings by de Chirico and the works of contemporary artists. 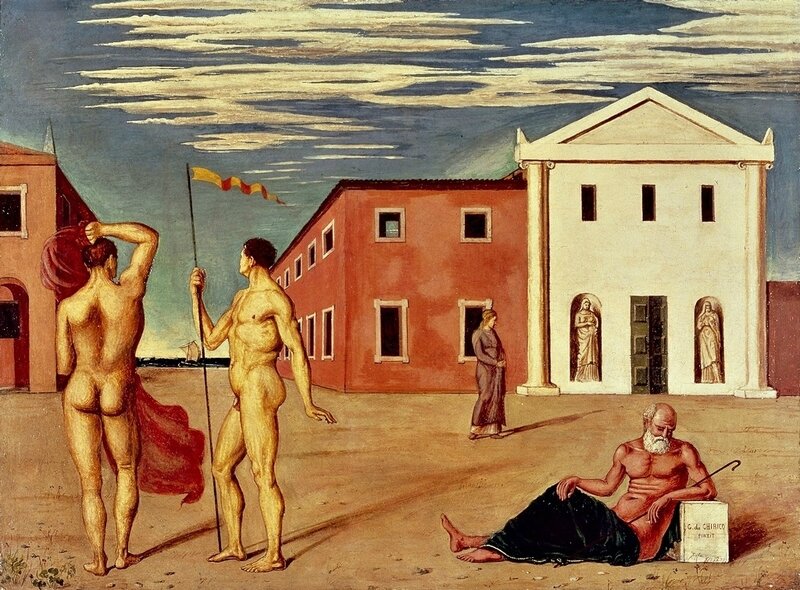 Presented in the historic state rooms on the first floor of the Savoy palace, starting from Room 15, the itinerary includes Composizione Metafisica (Muse Metafisiche) (Metaphysical Composition - Metaphysical Muses), 1918, on view in relation to Casa di Lucrezio (House of Lucretius) (1981), by Giulio Paolini, under the theme of the double and of the poetic enigma, which continues in Room 16 with Il trovatore (The Troubadour), 1922, to arrive at the wonder of the pure metaphysical suspension of Il saluto degli argonauti partenti (Greetings of the Departing Argonauts), 1920, in Room 17. In Room 5 the self-portrait is instead the theme that connects Autoritratto metafisico (Metaphysical Self-Portrait), 1919, to the imposing L’architettura dello specchio (Architecture of the Mirror), 1990, by Michelangelo Pistoletto, while in Room 6, Interno metafisico (con faro) (Metaphysical Interior – with Lighthouse), 1918, opens up to the imaginative architectures painted by Franz Ackermann. In Room 7, the journey continues with the Composizione metafisica (Metaphysical Composition), 1916, and the works of Fabio Mauri, and then in Room 13, Interno metafisico (con dolci ferraresi) (Metaphysical Interior – with sweets from Ferrara), 1917, creates an unexpected relationship with the works of Alighiero Boetti in the interest by both artists in details taken from everyday life. To complete the exhibition path, in Room 14, the exhibition shows the work of de Chirico Due cavalli (Two Horses), 1927, in relation to Novecento (1997) by Maurizio Cattelan, fostering a dialog in which the Dionysian impetus of the master of metaphysics meets the cynical vision on the past century of the contemporary Italian artist.