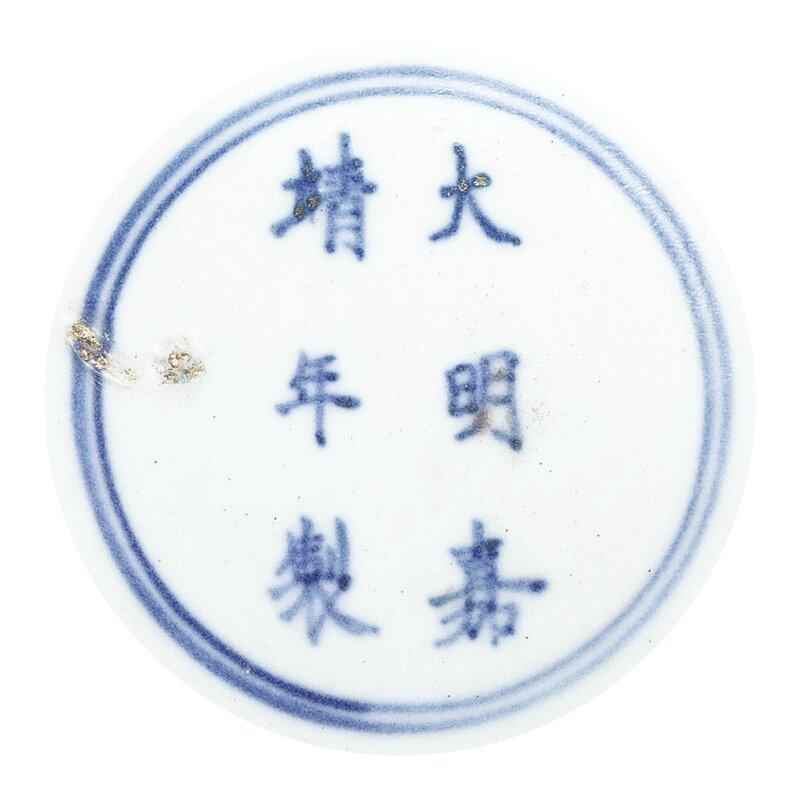 The elegant vase is well potted and decorated on the compressed globular lower section with a broad frieze of scrolling lotus supporting the 'Eight Buddhist Emblems'. The lotus decoration is repeated on the pear-shaped upper gourd with broad friezes below a band of three floral sprays encircling the broad mouth. The upper and lower sections are divided on the narrow waist by further symbols and cloud scrolls. The vase is covered in a brilliant turquoise-blue glaze pooling to a deeper turquoise in the carved recesses to accentuate the design. The reign mark is inscribed on the base in underglaze blue and covered in a transparent glaze, Japanese wood box.

Note: The double-gourd form appears to have been particularly favoured for vases produced during the Jiajing period. The auspicious Daoist connotations invoked by the double gourd shape clearly found particular favour with an emperor preoccupied with Daoist beliefs. In this case the Daoist symbolism associated with the double-gourd form is complemented by the Buddhist imagery of the lotus scroll and the Buddhist Emblems.

Only one other comparable Jiajing-marked turquoise-glazed vase has been published. It is of the same size and with almost identical incised decoration with the exception of slight differences in the symbols around the waisted neck and the order in which the Emblems appear around the lower body. The vase, formerly in the collections of Colonel Octave du Sartel, Alfred Clark, H.M. Knight and Jaap Ensing, and now in the Meiyintang Collection is illustrated in Chinese Ceramics from the Meiyintang Collection, Volume 4, London, 2010, no. 708.

Jiajing-marked double-gourd vases decorated with lotus scroll in different enamel palettes are preserved in a number of important museum and private collections. A larger vase (45.1 cm. high) of similar shape, decorated with incised yellow enamelled lotus scroll against an iron-red ground, with a very similar underglaze blue reign mark to the one on the present vase, is in the Palace Museum Collection, illustrated in Miscellaneaous Enamelled Porcelains - Plain Tricoloured Porcelains, The Complete Collection of Treasures of the Palace Museum, Shanghai, 2009, no. 49. A vase of approximately the same size as the present example decorated with scrolling lotus in iron-red on a green ground in the British Museum is illustrated by Jessica Harrison-Hall in Ming Ceramics in the British Museum, London 2001, no.9:94. A pair of Jiajing-marked double gourd vases decorated in underglaze blue and iron-red against a yellow ground, also in the British Museum Collection, is illustrated ibid., nos. 9:88 an 9:89. 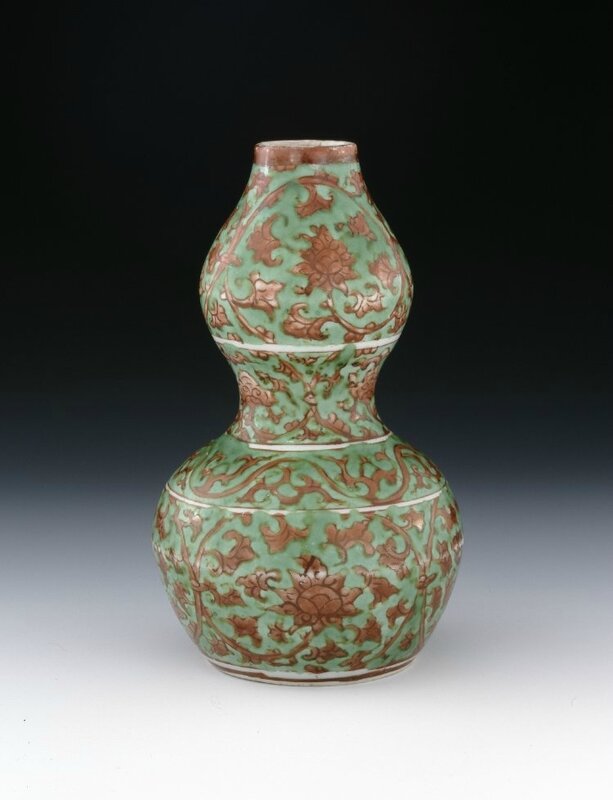 Gourd-shaped porcelain bottle with red enamel reserved on an overglaze green ground, Ming dynasty, Jiajing six-character mark in a double ring in underglaze blue and of the period (1522-1566), 19.2 cm. Bloxam donations, 1928,0718.3. © 2017 Trustees of the British Museum 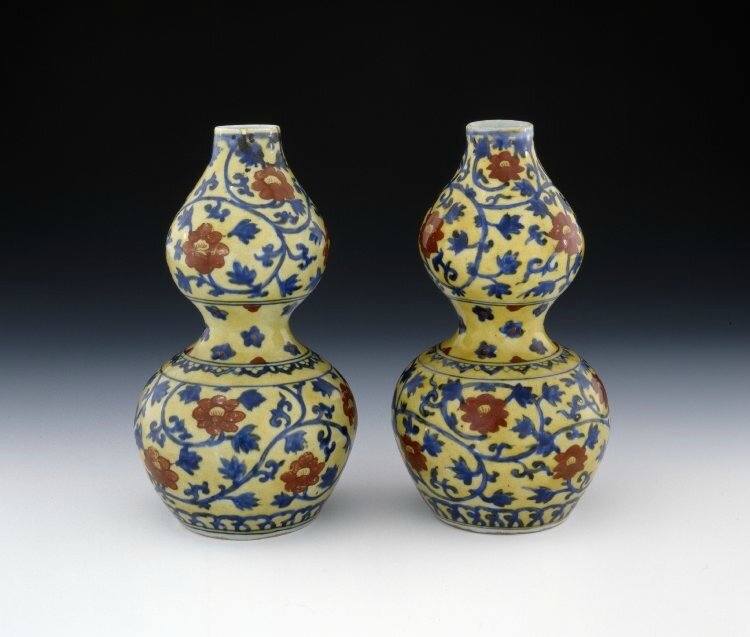 Monochrome wares glazed in a variety of different shades of blue, green and yellow with incised decoration became increasingly prevalent during the Jiajing period. However, turquoise glazed wares, which have their origins in the Yuan dynasty, appear to be very rare. Three examples in the British Museum including a ewer with incised lotus decoration, a dish and a square dish with raised slip decoration, are illustrated op. cit., 9:78, 9:79 and 9:80.