Bonhams achieves its highest total for Asia Week at $16.96 million

Bonhams achieves its highest total for Asia Week at $16.96 million NEW YORK, NY.- Bonhams concluded its Asia Week with a total of $16.96 million, the highest total ever achieved for Asia Week at Bonhams New York, realized over six sales from March 19 to 21.

“This was a special season at Bonhams as we celebrated our 10th anniversary of Asia Week in New York. The successful results of our sales emphasized the continued strength of the market in a wide range of categories from Tibetan sculptures to Chinese classical works of art. We were also delighted to have presented a special non-selling exhibition showcasing Masterpieces of Japanese Art from a private collection,” said Dessa Goddard, US Head of Asian Art, Bonhams.

The Indian, Himalayan & Southeast Asian Art sale on March 19 and the evening sale of The Maitri Collection sale on March 20 totaled $11.2 million with the leading work achieving $1,392,500 – a 13th/ 14th century gilt copper figure of Shakyamuni Buddha, one of the largest Buddha bronzes thus far attributed to the lost Khasa Malla kingdom of Western Tibet and Western Nepal. In addition, the groundbreaking gilded 15th century Tibetan sculpture of the thousand-armed Avalokiteshvara realized $1,212,500. Other significant results were achieved by a rare Nepalese bronze of Manjusri Namansangiti of Heeramaneck provenance that sold for $672,500. 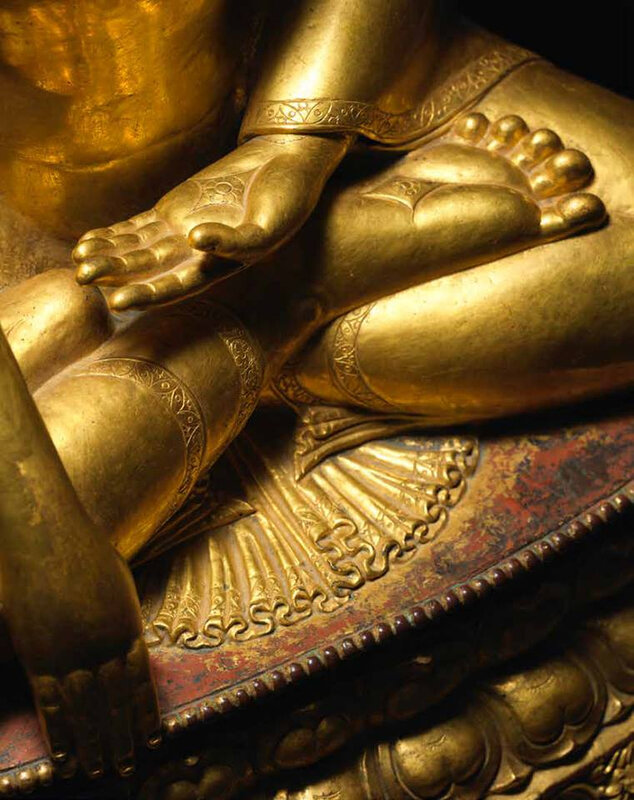 Note: This Buddha is one of the largest bronzes thus far attributed to the lost Khasa Malla kingdom of Western Tibet and Western Nepal (flourished 13th century). It was evidently produced by the artist(s) in their prime, exhibiting the highest quality of modeling, casting, chasing, and gilding.

His formidable frame is softened by the sinuous fluidity of the sheer sanghati clinging to his body, and the delicate engraving on the double hemlines, showing scrolling vines and rice grain patterns. The caster has achieved a beautiful balance and symmetry between the precise 'fishtail' lapel of Shakyamuni's robe over the left, coupled with its hems pooling around his ankles.

Fleshy cheeks, heavy-lidded eyes, and plump lips convey the auspiciousness of a well-nourished being, integral to the criteria for beauty within Nepalese aesthetics. He smiles cheerfully, very much present before his audience, where other large Buddha images seem deliberately aloof.

Exemplary of the Khasa Malla tradition, the back of the sculpture's base is plain and painted with red pigment. The double-lotus band across the front and sides, however, has plump, double-lobed petals incised with an eyelash motif. Below them runs a frieze with an upright vajra flanked by side ribbons at the center of a bed of scrolling vines, floral roundels, and a pair of lions.

Siudmak finds the origins of Khasa Malla lotus bases in the bronze sculpture of Kashmir (Siudmak,The Hindu-Buddhist Sculpture of Ancient Kashmir and its Influences, 2013, p.462). However, details particular to this rare instance of a large Khasa Malla Buddha surviving with its original base, and that base having an even rarer ornate band, appear to indicate borrowings from the Pala style. This can be gleaned from the similarity of the scrolling lotus vines and the lions facing outwards with their tails whipping over their backs (cf. Huntington, Leaves from the Bodhi Tree, Dayton, 1990, no.36). Yet closer still, the bronze appears to be in union with the 14th-century Newari painted murals of the South chapel of Shalu monastery in Southern Tibet, with its inverted flowers presented as closed blossoms or palmettes. The only other known large sculpture to feature a similar lower band is a bronze of Avalokiteshvara Shadakshari from the Sandor Fuss Collection, which is embellished with simpler floral decoration (Rossi & Rossi, 2007, no.7).

In discussion of the present lot, Ian Alsop states:

"It is notable for the mystery that surrounds the Khasa Malla dynasty... The Khasa Mallas were kings with somewhat contradictory origins and leanings. As Indo-Aryans who first used the language now known as Nepali – the state language of the world's "only Hindu kingdom" – they were apparently Buddhists who ruled an area containing both Tibetan Buddhists and Brahmanical Nepalese."
(Foxun–zaoxiang yishu jicui – The Art of Buddhist Sculpture, Beijing, 2013, p.124):

The bronze sculpture patronized by these kings borrowed from the broader Newari tradition of the Kathmandu Valley, while also distinguishing itself from it. The acutely defined knuckles of the right hand and the ribbon-form jeweled earrings are two such idioms setting the Khasa Malla style apart, in addition to the aforementioned base. Related examples included a smaller Buddha on a plain lotus base, with a similarly broad and robust frame, sold at Sotheby's, New York, 17 June 1993, lot 9. Two without their bases are in the collection of the Patan Museum (http://asianart.com/patan-museum/a10.html) and the Rubin Museum of Art (HAR#65687). Another large Khasa Malla Buddha of bulkier proportions on an unglided lotus base within a private Beijing collection is published in Dependent Arising - Himalayan Art, Beijing, 2018, no.58. Also compare with large sculptures of the Bon figure of Tonpa Shenrab in the Pritzker Collection (HAR#58313). 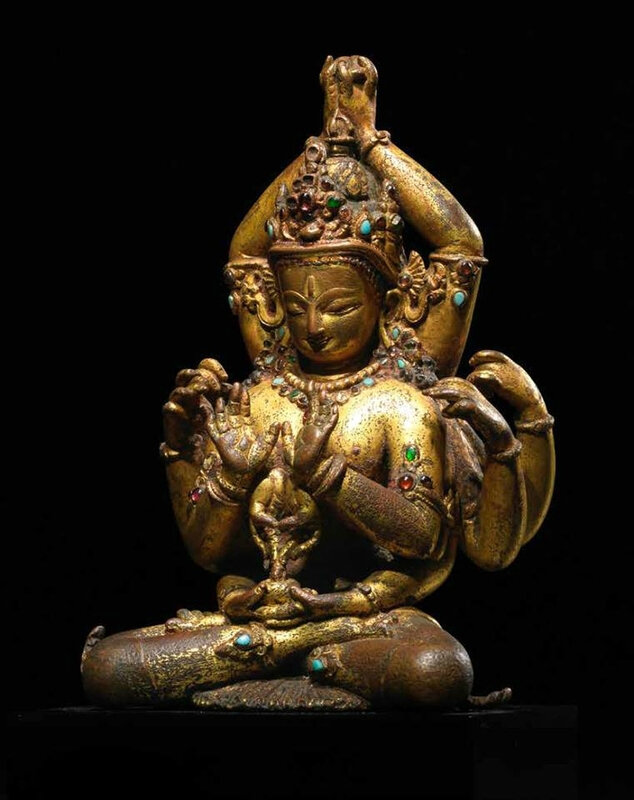 Edward Wilkinson, Global Head of Indian, Himalayan and Southeast Asian Art, commented: “Bonhams continues to offer the highest quality Indian, Himalayan and Southeast Asian art and demonstrates its position as the leader in this category. It was gratifying to see global interest and participation for works at all price levels, exemplified by the important 15th century Tibetan sculpture of the thousand-armed Avalokiteshvara, which sold for $1.2 million.”

The sales of Chinese Works of Art and Paintings and The Dr. Sylvan and Faith Golder Collection of Chinese Snuff Bottles realized a total of $4.4 million, with the top lot – a beautiful hanging scroll of Red Peony, 1948 by Yu Feian selling for ten times its estimate at $348,500. A further strong price of $275,000 was achieved for an elegantly potted celadon-glazed double-gourd vase with a Qianlong seal mark and of the period, which was deaccessioned from the Currier Museum of Art. Provenance: Acquired in Beijing prior to 1949 by US Foreign Service Officer The Fine Japanese and Korean Art and The Arno Ziesnitz Collection sale was highlighted by a highly important Meiji-era solid-gold short sword, which realized $187,500, and a Korean ten-panel screen depicting a bird's eye view of Pyongyang from the Joseon dynasty, sold for $87,500.