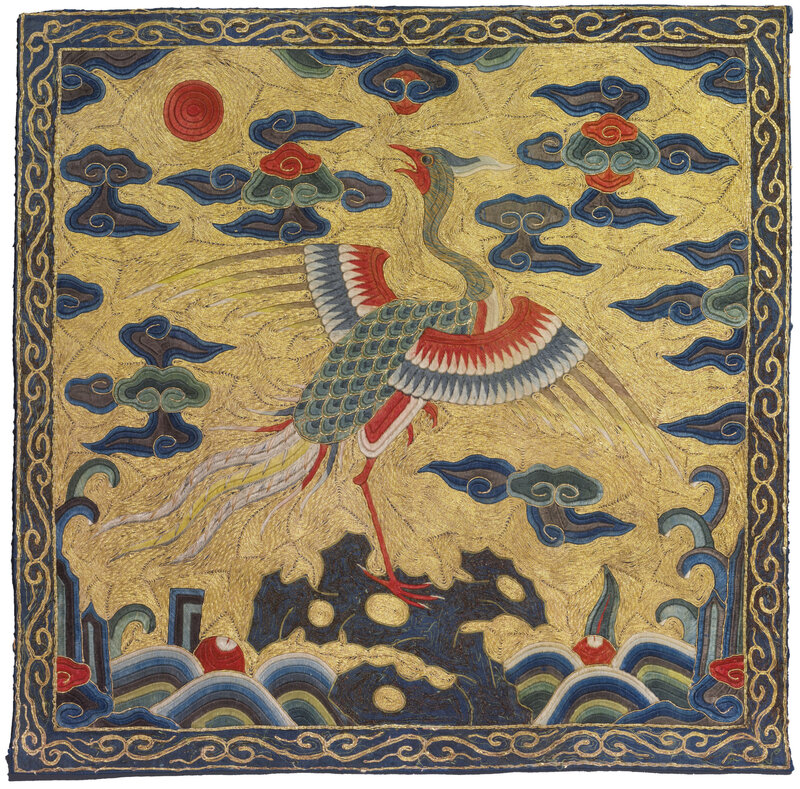 Made for a second-rank civil official, the badge is finely worked in satin stitch, depicting a regal golden pheasant rendered in shades of blue, green, yellow, white and coral, shown facing the sun as it alights on a rock emerging from crashing waves. The main decoration is below ruyi-shaped clouds and the sun finely worked in shades of blue, green and coral, the rock formation with remains of peacock-feather filament. The design is all reserved on a dense ground of couched gold threads, within a scroll border, mounted.

Note: Extant examples of Kangxi-period civil rank badges are very rare. The present badge is made even more rare by the fact that it is decorated with a golden pheasant to be worn by a 2nd rank civilian official in the Imperial household. The distinguishing features of the golden pheasant include the way in which the tail feathers are lightly barred, the green body, yellow neck and blue crest. Whilst Kangxi period badges of egrets, peacocks or silver pheasant are known, the present badge appears to be one of only two surviving examples decorated with a golden pheasant, and with its vivid colours and bright gold-couched ground, is unique for remaining in a superb state of preservation. The only other known Kangxi period official's rank badge of a golden pheasant, reserved against a blue gauze ground rather than the gold-couched ground on the present example, was sold at Christie's New York, 16 September 2010, lot 1072.

For another closely related Kangxi-period gold-couched-ground rank badge, see the example decorated with a silver pheasant illustrated by B. Jackson and D. Hughes, Ph.D., Ladder to the Clouds, Berkeley, California, 1999, p. 229, no. 15.010, and later sold at Christie's New York, The Imperial Wardrobe: Fine Chinese Costume and Textiles from the Linda Wrigglesworth Collection, 19 March 2008, lot 28.