A rare wucai ‘phoenix’ double-gourd-form wall vase, Wanli six-character mark in underglaze blue within a double rectangle and of

A rare wucai ‘phoenix’ double-gourd-form wall vase, Wanli six-character mark in underglaze blue within a double rectangle and of 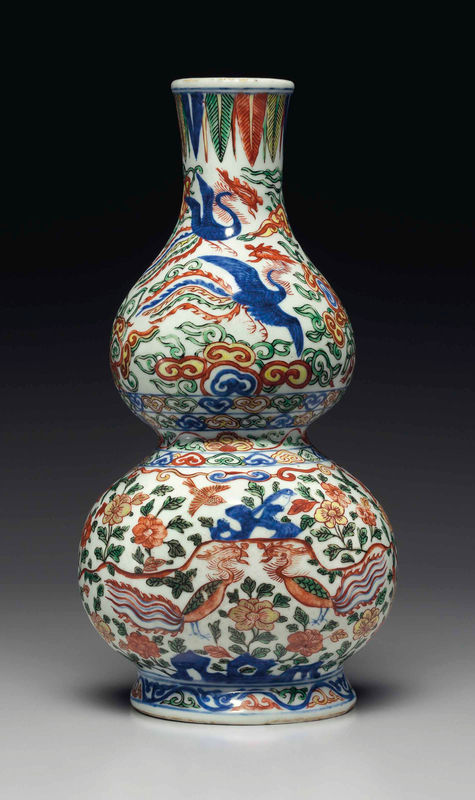 The lower body is decorated with two phoenixes confronted above blue rocks amidst flowering peony within a shaped panel below an upper panel of a bird perched on a rock in the midst of further peonies and birds in flight beneath trailing clouds. The upper body is decorated with two further phoenixes in flight amidst ruyi-shaped clouds between bands ofruyi heads at the lingzhi-scroll-painted waist below and a band of leaf tips pendent from the mouth rim above. The flat back is outlined in underglaze blue and has a deep rectangular opening for hanging purposes below the mark, which is painted in underglaze blue within a double rectangle raised on a lotus stem and capped by a lotus leaf, cloth box.

Note: A very similar wall vase, but with the lotus flower and leaf on the reverse decorated in red and green enamels rather than in underglaze blue, from the Tsui Art Foundation, is illustrated in Joined Colors: Decoration and Meaning in Chinese Porcelain: Ceramics from Collectors in the Min Chiu Society, Hong Kong, Arthur M. Sackler Gallery, Smithsonian Institution, Washington, D.C., 1993, p. 106, no. 34, and was later sold at Sotheby’s London, 12 July 2006, lot 68. Another closely related example, with the pair of phoenixes on the upper bulb facing in opposite directions, from the Mr. and Mrs. Otto Doering Collection, was sold at Christie’s New York, 9 November 1978, lot 130, and is illustrated by Anthony du Boulay, Christie’s Pictorial History of Chinese Ceramics, Oxford, 1984, p. 171, no. 3. Another nearly identical wall vase from The Le Cong Tang Collection was sold at Christie's Hong Kong, 27 November 2017, lot 8008. There is another closely related group of wall vases painted with cockerels on the lower bulb. One such example in the Palace Museum, Beijing, is illustrated in The Complete Collection of Treasures of the Palace Museum - 38 - Porcelains in Polychrome and Contrasting Colours, p. 33, pl. 30. A second is illustrated in Porcelains from the Tianjin Municipal Museum, Hong Kong, 1993, pl. 120; a third in the Baur Collection, is published by J. Ayers, The Baur Collection, vol. 2, Geneva, 1969, pl. A 201; a further example in the Staatliche Kunstsammlungen Dresden, is illustrated by E. Zimmerman, Chinesisches Porzellan, Leipzig, 1923, pl. 66; and a fifth was sold at Sotheby’s Hong Kong, 5 October 2011, lot 1901.