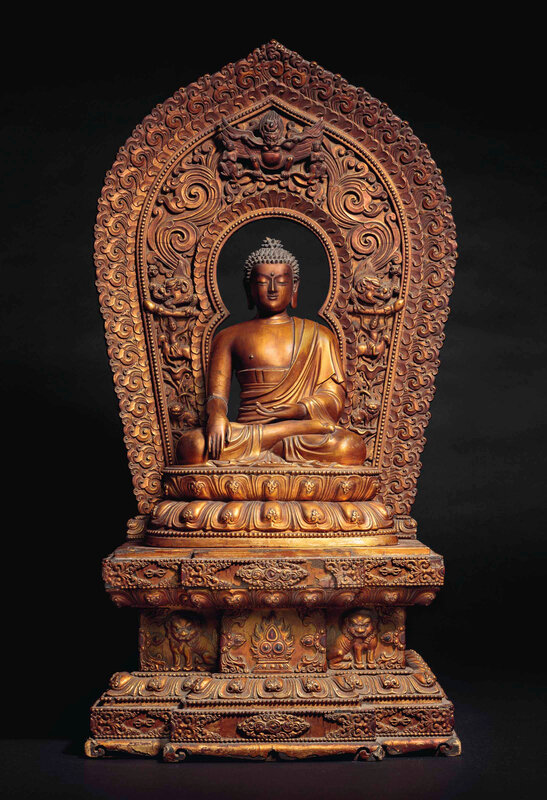 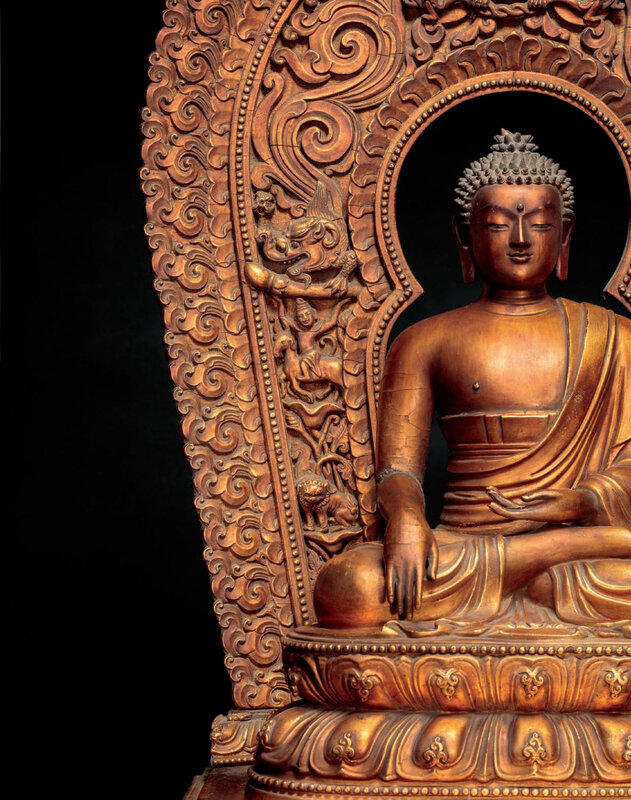 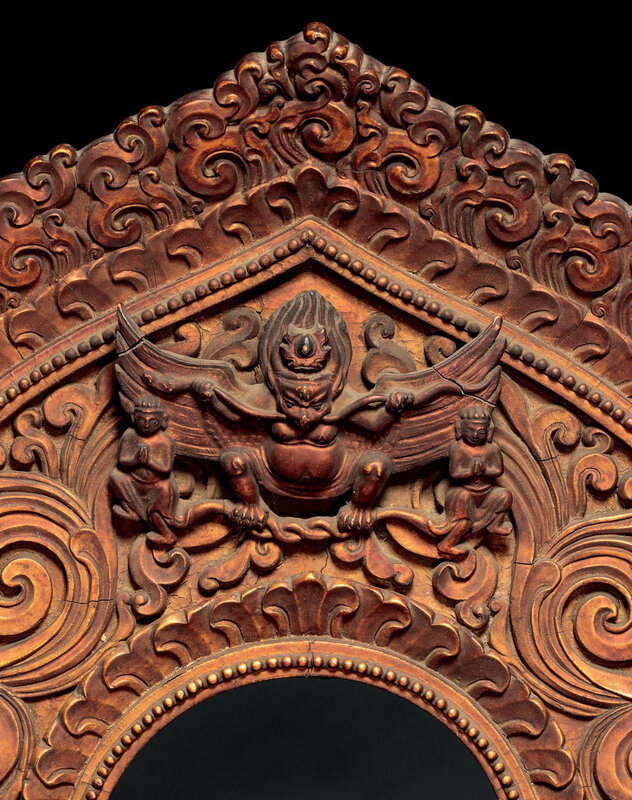 Shakyamuni sits in dhyanasana on a double-lotus base atop a rectangular throne centered with the flaming triratna motif and flanked by Buddhist lions. He holds his hands in bhumisparshamudra, the earth-touching gesture, and is clad in voluminous robes. The face is serene in expression, and the hair is in tight curls over the ushnisha. The figure is backed by an elaborate flaming aureole with images of lions, mounted figures, andmakaras, all surmounted by a Garuda with serpents emanating from his mouth.

Note: Stylistically, the present work can be related to a corpus of Buddhist gilt-lacquer sculpture commissioned during the reigns of the Kangxi and Qianlong Emperors at the Buddhist site of Rehol, near Chengde in Hebei province. Early in his reign, Kangxi understood the necessity for strong relations with the various Mongol tribes from the expansive steppes to the north and west of the capitol. One way in which he developed close bonds with the Mongol chieftains was to invite them on hunting excursions on an almost yearly basis. Rehol started as temporary hunting site, and was chosen for its strategic location at Chengde, north of Beijing, and for its idyllic beauty. It also boasted a massive phallus-shaped rock, known as Qingchui, that was likened to Mount Sumeru, the Buddhist axis mundi. As the Mongols were fervent followers of Tibetan-style Buddhism, Kangxi ordered the construction of various Tibetan-style Buddhist temples ordered around the axis of Qingchui. Under the reign of his grandson, the Qianlong Emperor, the site was expanded massively, with the layout of the site mirroring the Buddhist cosmology of a mandala. Qianlong even ordered the construction of the Putuo Zongcheng, a replica of the Potala Palace in Lhasa, complete with a façade with simulated painted windows, and the Puning Temple, a copy of the ancient Samye Monastery in Tibet.

The central focus of worship for many of these temples were massive gilt-lacquered sculptures, including the 22-meter-high figure of Thousand-Armed Avalokiteshvara at the Puning Temple. Most similar to the present work are three massive figures of Buddha in the Zongyin Hall of the Pule Si, constructed in 1766 (illustrated by Du Jiang in Buddhist Art from Rehol: Tibetan Buddhist images and ritual objects from the Qing dynasty Summer Palace at Chengde, Taipei, 1999, p. 29). Characteristic of many of these lacquered sculptures was the deeply colored gilding, almost in imitation of patinated gilt-bronze, atop thick red or black lacquer. Although no records exist as to why lacquer was chosen for the majority of the sculptural ensemble, it is likely the use of the more plentiful and pliable material allowed for a more extensive building project. Certainly, the façade of the Putuo Zongcheng indicates that Qianlong’s architects were willing to look for creative shortcuts.

One of the defining features of the three massive gilt-lacquered Buddhas in the Zongyin Hall is the ornate flaming aureole behind each Buddha. The examples in the Zongyin Hall have large, separately carved figures of Garuda at the top of the aureole, very similar to an example sold at Christie’s New York, 13 September 2011, lot 376. The affinity between the present work and the massive gilt-lacquer Buddhas at the Zongyin Hall is striking. While the present work appears to date even earlier than 1766, with stylistic qualities characteristic of the Kangxi period, the composition and style of the present sculpture must have partially inspired the larger Pule Si examples. It is highly likely the three massive Buddhas at the Zongyindian at Pule Si represent the Three Buddhas of the Ages: Shakyamuni at center with Dipankara, the Buddha of the Past at his right and Maitreya, the Future Buddha on his left. During the mid-18th century, Qianlong became obsessed with the concept of the Three Buddhas of the Ages, and among other things, ordered kesi tapestries depicting the theme as a gift to the Seventh Dalai Lama. According to Patricia Berger, elucidated in Empire of Emptiness: Buddhist Art and Political Authority in Qing China, United Kingdom, 2003, p. 43, the Three Buddhas of the Ages was a visual rebus that subtly illustrated Qianlong’s political and religious magnificence. Although it cannot be authoritatively ascertained, the similarity of the present work to the three Buddhas at the Pule Si would make it possible that it represents Shakyamuni Buddha and was once accompanied by corresponding figures of Dipankara and Maitreya Buddhas. A gilt-lacquered wood figure of Avalokiteshvara enthroned, similar to the present figure, was sold at Sotheby’s New York, 14 September 2011, lot 324.