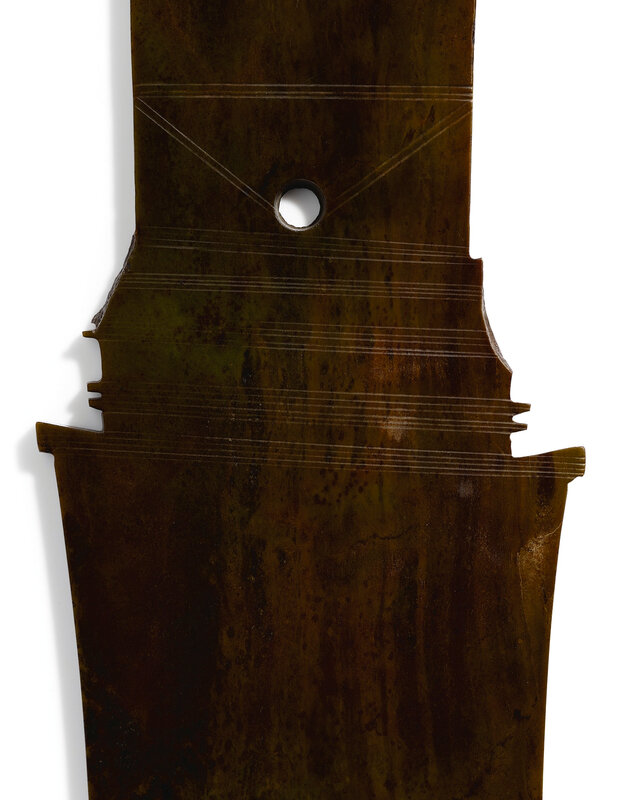 with an elongated form flaring slightly towards the arched cutting edge with one subtly bevelled side, the opposite end flanked by angular projections and centred with a pierced aperture, each side finely incised with parallel lines, one with an additional incised triangular marking, the surface lustrously patinated to a variegated olive-green and brown colour highlighted with attractive beige striations.

Note: Jade blades with teeth-like protrusions such as the present example are known as yazhang. Originating from the Longshan Culture in the Neolithic period, the distribution of the earliest prototypes is predominantly found in Shandong and Shaanxi Shenmu Shimao in the lower and central regions of the Yellow River. The production of yazhang was popular in the Xia and Shang dynasties but was abandoned by the late Shang dynasty. According to archaeological research and findings, Shimao yazhang can be dated to the late Longshan period to the Xia dynasty, making these enigmatic objects 4000 years old.

The function of yazhang has been an area of discussion and interpretations of it as a military implement have been suggested in ancient texts such as Zhouli [Rites of Zhou] Office of Spring, Dianrui, as well as Zheng Xuan's commentaries in the Eastern Han dynasty. Archaeological excavations from sacrificial pits have, however, indicated that yazhang was in fact ceremonial objects.