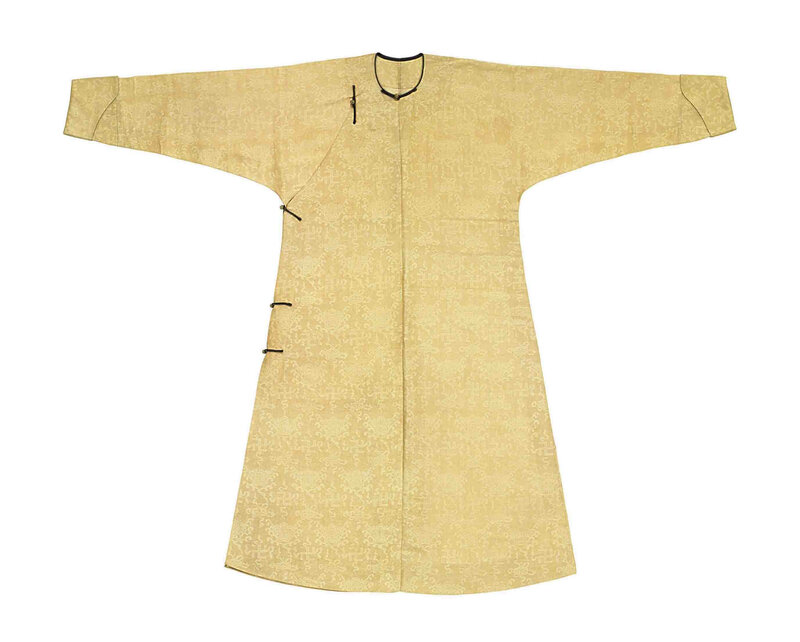 Of pale yellow color, finely damask-woven with a repeating pattern of wanemblems amidst triple-peaked mountains and ruyi-shaped clouds, the collar edge in midnight-blue piping, with turned-back, lined, horsehoof cuffs, and gilt filigree buttons.

Note: This informal style of robe was described as a changfu or 'ordinary robe' in Chinese. It's classic shape was the standard form of male garment during the Qing period (1644-1911), and originally derived from the Manchu horseman's riding robe. The narrow sleeves allowed the horseman free movement whilst it horsehoof-shaped cuffs protected the wearer's hands. The original front and back vents, now closed on this robe, also permitted the wearer to mount and ride a horse with ease. After their conquest of China in 1644 and foundation of the Qing dynasty, the Manchus imposed their own traditional dress on the Han Chinese population. This was an attempt to reinforce elements of Manchu culture. The changfu, therefore, became standard dress for the ruling elite. The color of the robe is interesting. It is a pale yellow, a color associated with the imperial family. However, changfu were not restricted in the same way as imperial court dress with regard to color, and there were changing fashions among the men of the imperial court. Style guides were even published regularly.

The symbolism of the design of the triple-peaked mountain in combination with the wan emblem is unusual. However, the design recurs on 18th and 19th century materials, often incorporated into informal robes made for the imperial family. Both symbols, individually, are common motifs on Qing period robes. The triple-peaked mountain is a standard feature of the so-called lishui or 'deep water' motifs around the hem of court robes. There it represents sacred mountains at the cardinal points of the compass and aligns the wearer of the robe within the Chinese cosmos. In the context of this robe, it may represent stability. The swastika originally entered China with Buddhism and was believed to represent the power of the Buddha's compassion. In China, the word for 'swastika' is wan, whose pronunciation is similar to another character meaning 'ten thousand'. The combination of the wan emblem with auspicious motifs therefore multiplies and increases their power.