Painting at University of Aberdeen confirmed as hidden treasure by Canaletto

Painting at University of Aberdeen confirmed as hidden treasure by Canaletto 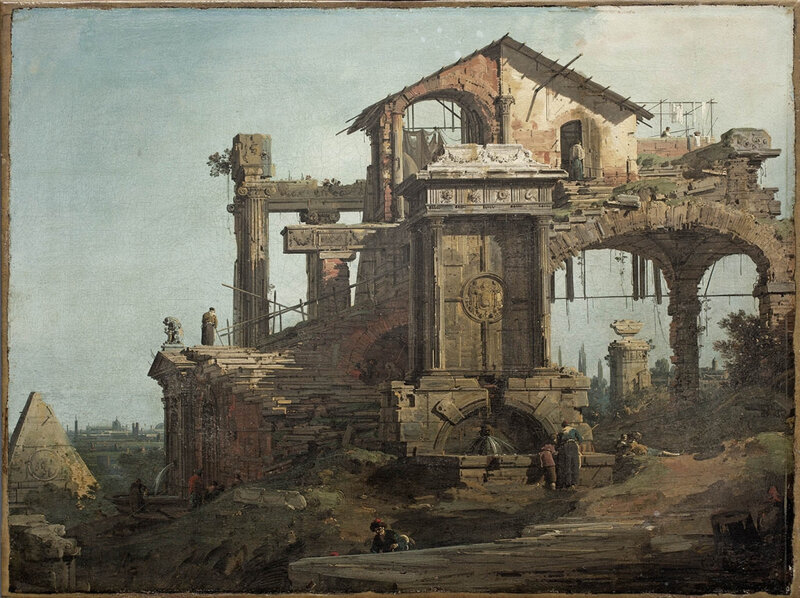 Canaletto, The Ruins of a Temple © University of Aberdeen

ABERDEEN.- A painting gifted to the University of Aberdeen has been identified as a £2million work by a prominent Italian artist - more than 150 years after it was donated.

The image of Roman ruins outside a city has now been positively identified by two experts as an original work by 18th century Venetian artist Canaletto.

Senior lecturer in History of Art at the University of Aberdeen, John Gash, and leading Canaletto expert Charles Beddington have published their findings in The Burlington Magazine – the leading journal on fine arts.

“It was often thought to be from the Canaletto school – that is, by one of Canaletto’s pupils or someone imitating his style,” explains Mr Gash. “However I and others have long suspected it was a real Canaletto and now we have been able to confirm this.

“It is clear from the technique and the style, as in the language of forms and composition, that this is a Canaletto and is in fact an autograph work of the highest quality.”

In researching the painting, Mr Gash read an 1865 article from the Aberdeen Journal that explained the picture was left to the University two years previously by Alexander Henderson of Caskieben, Dyce, together with other paintings and an internationally-important collection of ancient Greek pottery.

The newspaper article describes the painting as ‘The Ruins of a Temple’, by ‘B. Canaletti’. Canaletto’s real name was Giovanni Antonio Canal, but his nephew and pupil, Bernardo Bellotto, was confusingly also later known as Canaletto. So it is unclear whether Henderson, who donated the paintings, believed the painting to be by Canaletto’s nephew, or had merely got the name of the original Canaletto confused.

The painting is not signed by the artist but this is not uncommon.

“Occasionally, Canaletto did sign his works but not in this example. However in the middle of the painting is a ruin which displays the coat of arms of his family. It’s unlikely someone else would include that, so it acts as a kind of surrogate signature,” explains Mr Gash.

Canaletto was one of the most important Venetian painters of the 18th century. He specialised in view paintings or ‘vedute’ and was renowned for his precisely reproduced images of Venice.

The ‘Ruins of a Temple’ painting at the University of Aberdeen is not of Venice’s famous canals but a capriccio – a collection of many different elements brought together for the purposes of aesthetics – of a ruined temple on the outskirts of a city (perhaps based on Rome or Padua) with a number of people in the foreground and background.

“It is difficult to put an accurate price on paintings such as this but given its physical size, subject matter and the quality of the piece I would suggest it could be worth between £1.5million and £2million,” comments Mr Gash

The article in the Burlington Magazine, entitled “Paintings by Canaletto and his father in Aberdeen University”, also attributes a View of the Grand Canal with San Simeone Piccolo and the Scalzi that is also in the University’s collectionto Canaletto’s father, Bernardo Canal (1673-1744). He was originally a stage designer but, towards the end of his life, became a copyist of his son’s views of Venice.

To supplement the Capriccio, the University has recently acquired a fine impression of Canaletto’s most famous etching, The Portico with a Lantern (c.1740-44), with the aid of grants from the Principal, former Vice-Principal, Derek Ogston, and the Scottish Government’s National Fund for Acquisitions.

Plans are under way by the University to publicly display the Canaletto and the other related items.