"If any of my discoveries are important, the ‘hole’ is. By ‘hole’ I meant going outside the limitations of a picture frame and being free in one’s conception of art. A formula like 1+1=2. I did not make holes in order to wreck the picture. On the contrary, I made holes in order to find something else…" Lucio Fontana

The sharp punctuations that rupture the shimmering, iridescent surface of Lucio Fontana’s Concetto spaziale of 1966, demonstrate the artist’s continued fascination with one of the most iconic gestures that informed his art – the buchi. Perforating the canvas in a rhythmic, carefully executed geometric pattern, these small, precisely carved holes reveal a tantalising glimpse into the enigmatic space beyond the canvas, opening the viewer’s eyes to a new, unknown dimension beyond, an infinite, limitless void whose mysteries await us. Fontana first experimented with piercing the pictorial surface in 1949, puncturing a series of holes through pieces of thick white paper using a pointed tool. In executing this iconoclastic act, Fontana realised his quest for a ‘spatial art,’ creating works of art that transcended the conventional boundaries of painting and sculpture and existed in a new spatial realm. ‘When I hit the canvas,’ Fontana explained, ‘I sensed that I had made an important gesture. It was, in fact, not an incidental hole it was a conscious hole: by making a hole in the picture I found a new dimension in the void. By making holes in the picture I invented the fourth dimension’ (Fontana, quoted in P. Gottschaller, Lucio Fontana: The Artist’s Materials, Los Angeles, 2012, p. 21). From paper, he moved swiftly to canvas, painting the surface with oil paint before piercing through and experimenting with the size, shape and placement of the holes, activating the space both in front of and behind the composition, infusing it with an enhanced sense of three-dimensionality. 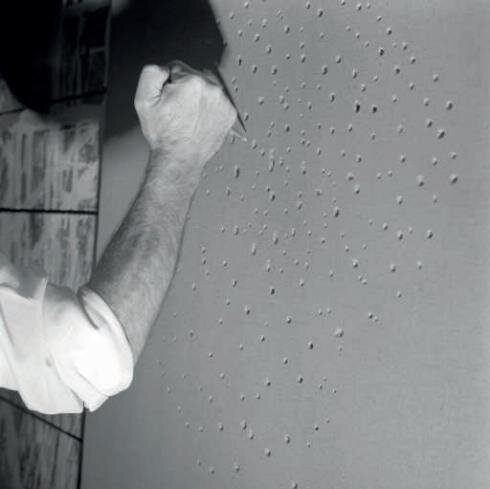 While Fontana’s early buchi compositions had holes punctured in arbitrary, seemingly spontaneous formations across the canvas, appearing like constellations of stars floating in a far-off galaxy, as the series developed through the 1960s the configuration of the holes became increasingly geometric and ordered. Indeed, in Concetto spaziale, the holes are carefully scored with an elegant precision and arranged in horizontal and semi-circular rows that are subsequently contained within an oval form. This ovoid shape was accentuated by the inclusion of a gently undulating hand-drawn pencil line, which surrounds and harnesses the buchi, corralling them into this formation, holding them in place with an otherworldly sense of gravity. A recurring motif within Fontana’s oeuvre, the symbolic shape of the oval or egg fascinated the artist, the myriad of connotations it held – biological, spiritual and primeval – offering him endless inspiration and becoming the basis of one of his most celebrated series of artworks, La Fine di Dio.

This shimmering work was a birthday gift to the present owner in 1966, and has always been in the same collection until now. Using a lustrous silver paint, Fontana imbues the present work with a celestial radiance that harks back to the iridescent oil (olii) and metal (metalli) paintings the artist had created in the wake of his visits to Venice and New York at the beginning of the 1960s. Enraptured by the unique play of light and glimmering reflective surfaces he encountered in these iconic cities – from the Baroque glory of St. Mark’s, to the futuristic splendour of the Manhattan skyscrapers – Fontana felt he had finally glimpsed the imperceptive workings of the universe on earth. Marrying a sense of the gilded magnificence of Baroque Venice with the utopian sheen of the contemporary urban landscape, the silver, monochrome canvas becomes a microcosmic expression of the universe at large. The buchi meanwhile, operate in counterpoint to their iridescent surroundings, inviting the light to play in and around the rough edges of their small cavities, swallowing and deflecting the light at every turn, creating dynamic shadows that seem to shift and change under different lighting conditions. Executed from both sides of the canvas, the holes lend the composition a rich sense of texture, with the edges of the buchi alternatively protruding outwards towards the viewer and sinking back into its surface. Poetically conjuring a sense of the infinite and the cosmic, Concetto spaziale stretches and challenges our understanding of what an artwork can be, inviting us to consider and imagine what lies beyond the limits of our perception.