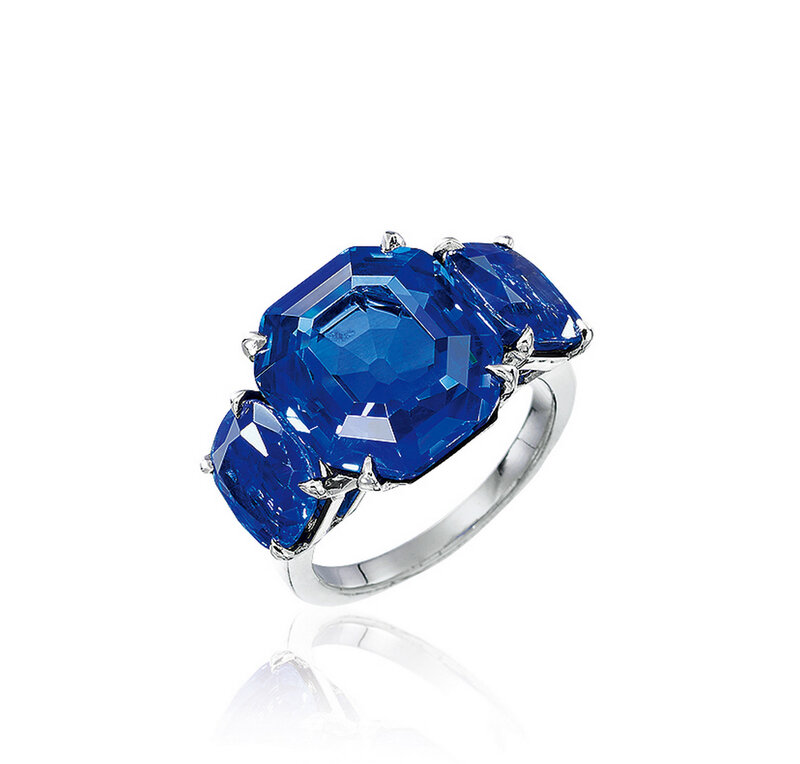 Note: Although some Burmese and Ceylonese sapphires are famous, only the Kashmir Sapphire could be named as “King of the Sapphire World”. Kashmir is located in the northwestern corner of the Indian subcontinent, in a valley between India and Pakistan. With an average altitude of over four thousand meters, Kashmir is cold all year round. The mining work is hard in Kashmir due to short annual production time and frequent wars. These make the gem hard to come by.

Since the mines were depleted in such a short period of time, the scarcity of Kashmir sapphires has made these stones tremendously sought-after by gem connoisseur all around the world.
Kashmir sapphires pronouncedly display distinct blue colour and the signature ‘velvety’ texture caused by the inclusion of exsolved rutile silk. Under magnification, the exsolved rutile of Kashmir sapphires differs from that of Burma and Sri Lankan stones in terms of the size of the crystals. Many appear as tiny dots in snowflake patterns, and magnification of 40x or more is often required to resolve individual crystals. Due to its extremely fine nature, Kashmir rutile provides subtle light scattering without materially affecting transparency, giving these gems their velvety appearance. Sapphires from Sri Lanka, Thailand （especially Kanchanaburi） and Pailin may also exhibit a certain milkiness, making confusion a real possibility. The haziness in Kashmir stones, however, is extremely fine in nature, not enough to seriously degrade the clarity, but just enough to impart the distinctive velvety luster to the stones. uspending to the front, the pendant set with an emerald-cut emerald weighing 144.00 carats, to a double-surround of brilliant-cut diamonds, embellished with marquise-shaped diamonds, to a brilliant-cut diamond necklace totalling approximately 21.55 carats, signed and numbered 21638, mounted in 18 karat white and yellow gold, length approximately 725mm. Bracelet fitting.

Van Cleef & Arpels
Van Cleef & Arpels has always been inspired by the unique creative energy of love, for it was love which brought the Maison into being.
Towards the end of the 19th century, a young girl named Estelle Arpels – the daughter of a dealer in precious stones – met a boy named Alfred Van Cleef, the son of a stone-cutter. It was the beginning of a love story like no other, a great adventure beyond expectation.
But above all, they were inspired by the desire to create something lasting together. That desire led them to found the Maison of Van Cleef & Arpels. In 1906, Alfred set up in business with Estelle’s brother Charles, a talented salesman who managed their new boutique in Paris’ Place Vendôme. Two years later, Estelle’s brother Julien joined the firm； they were joined in 1912 by her third brother, Louis.
Over the years that followed, they succeeded in making Van Cleef & Arpels synonymous with the most exquisite jewelry in the world. With that achievement, the love which first brought Estelle and Alfred together lives on to this day through the many enchanting love stories of the Maison. Note: In the fascinating world of coloured gemstones, jadeite has always adored by the Chinese royal aristocracy and was treasured as the royal gemstone commonly known as “Imperial Jade”, resembling supreme status and wealth. The history of jade covers a period of time dating back over 4, 000 years and the highly priced materials are found nearly exclusively to the south-west of China, in the jadeite-jade deposits of Myanmar （Burma）. It was believed that the gem possessed most of the good virtues such as auspiciousness, prosperity as well as longevity and happiness.
Jadeite bead necklaces command the highest value due to the immense wastage incurred during the cutting process, the quality of many is far from satisfactory, the lack of colour, translucency and the purity of the material makes it unsuitable for carving enough beads for a necklace, let alone the availability of the limited rough； thus, high quality jadeite necklace are still mostly sought-after amid of its scorching price.
An impressive jadeite and ruby necklace offered here possesses a vibrant imperial green colour, evenly distributed and combined with extraordinary translucency in very fine texture despite all the above-mentioned limitations and rarity. Such combination extraordinary characteristics of this green jadeite necklace is hard to come by, displaying an alluring glamour and intensifies the subtle charm of the nobility. Note: The softness of dreamy pink hues reminiscent of femininity and often a tint of pink exudes the romance and elegance of an everlasting never go out-of-fashion white diamond. Unlike other coloured diamonds, the pink tint is not caused by trace elements, but the deformation of the internal crystal structure. Among the world’s global diamond production, there are approximately 90% of global pink diamonds are from the fable Argyle mine, only 0.1% of the twenty million carats of rough production is pink and the demand for this alluring pink far exceeds the supply.
Pink exudes timeless elegance. In this season, we will present a pair of 3.11 and 3.09 carat natural very light Pink diamond, pink diamond and diamond pendent earrings, embellished with variously-shaped and surrounds of brilliant-cut pink diamonds in posh setting, which perfectly denotes the mysterious alchemy of these natural wonders. The intricately-cut facets by precisions, radiates the brilliance and denotes a delightful and intriguing narrative of nature’s forces, geological evolution and the destinies of all who have guarded it on its journey to the hands of the gem connoisseurs and aficionadas around the world. 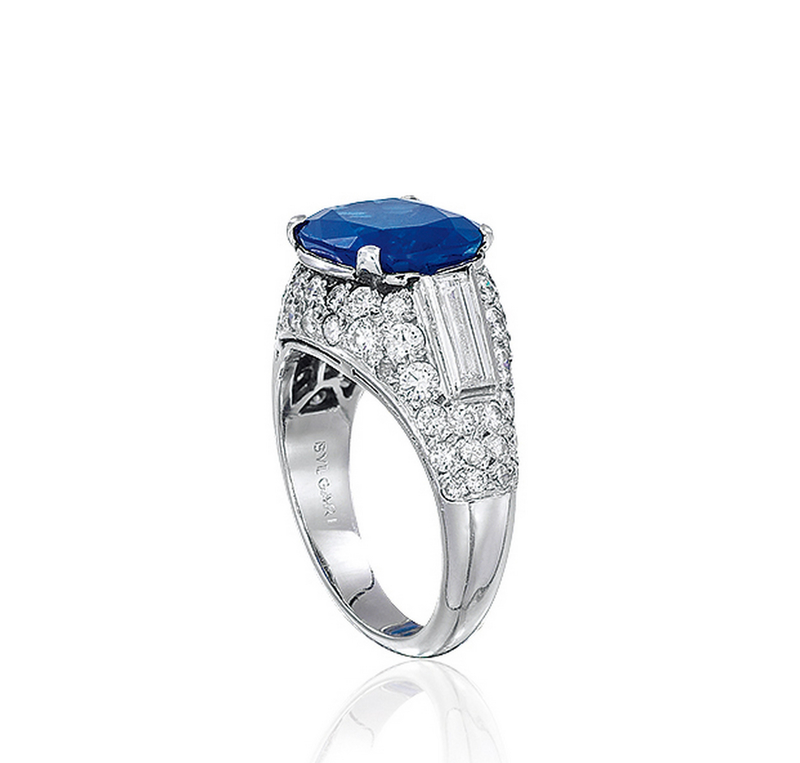 Kashmir Legend
Although some Burmese and Ceylonese sapphires are famous, only the Kashmir Sapphire could be named as “King of the Sapphire World”.
Kashmir is located in the northwestern corner of the Indian subcontinent, in a valley between India and Pakistan. With an average altitude of over four thousand meters, Kashmir is cold all year round. The mining work is hard in Kashmir due to short annual production time and frequent wars. These make the gem hard to come by.
Since the mines were depleted such a short of time, the scarcity of Kashmir sapphires has made these stones tremendously sought-after by gem connoisseur all around the world.
Kashmir sapphires pronouncedly display distinct blue colour and the signature ‘velvety’ texture caused by the inclusion of silk. With the source is non-existent, these Kashmir sapphire are almost never seen except in the auction market. Most of the Kashmir sapphires that exist in auction market were discovered more than 100 years ago. As these superlative sapphires are unrivalled among sapphires around the world, the demand for the gem far exceeds the supply.

Bulgari
Bulgari’s history can be tracked back to 1884 when Sotirio Georgis Bulgari opened his silverware shop in Rome, paying meticulous attention to producing pieces with unparalleled craftsmanship and creativity. In 1930, his two sons Costantino and Giorgio expanded the family business to include jewellery in Via Condotti, building a reputation its internationally renowned range of high jewellery.
For more than 130 years, Bulgari has developed a unique brand style. During the early 20th century, diamond-centric jewellery was most popular. However, deviated from the traditional Parisian school of jewellery, Bulgari started exploring the use of coloured gemstones, making jewellery pieces that come alive in a rainbow of colour combinations. It also reintroduced the cabochon cut for gemstones, transforming the jewellery industry profoundly. GRS numbered GRS2017-052510, 19 May 2017, stating the emerald is 34.05 carats, natural, Vivid Green colour, Colombian origin, minor clarity, stating that “this vividly saturated emerald of 34.05 ct is reminiscent in hue of the varieties displaying the legendary colours found in the world renowned Muzo mines. They are formally described as “Muzo Green” and commonly known in the trade as “Old Mine” emeralds.”
GGTL numbered Nr 15-G-11420, 3 December 2015, stating the emerald is 34.05 carats, natural, Muzo mine, Colombian origin, minor clarity enchancement.