A fine and magnificent lemon-yellow and underglaze-blue ‘Dragon’ vase, tianqiuping, seal mark and period of Qianlong (1736-1795)

A fine and magnificent lemon-yellow and underglaze-blue ‘Dragon’ vase, tianqiuping, seal mark and period of Qianlong (1736-1795) 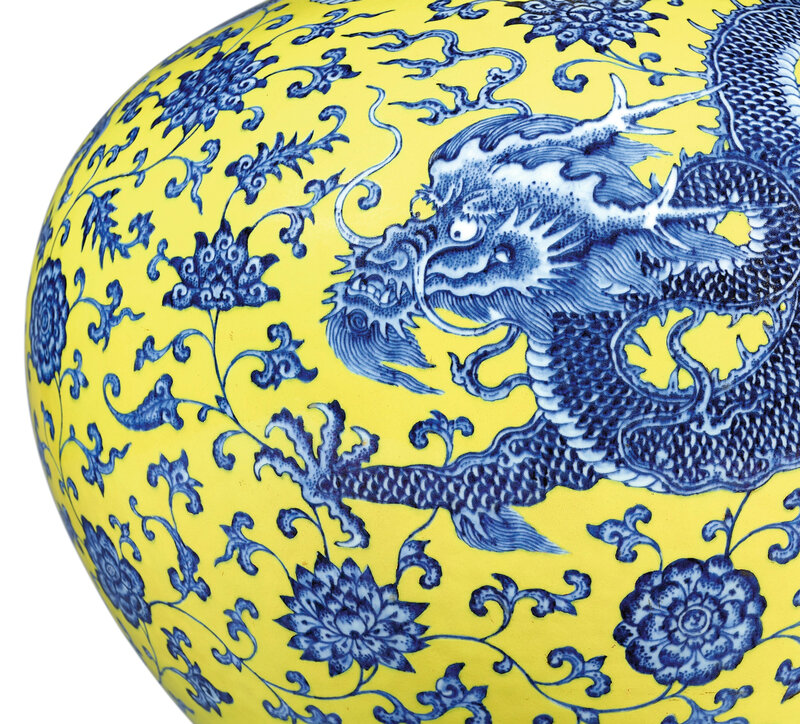 robustly potted with a globular body rising to a cylindrical neck, the body superbly painted in rich cobalt-blue tones simulating the 'heaped and piled' effect, depicting a pair of mighty ferocious dragons, with large bulging eyes beneath heavy brows and flaring nostrils flanked by long curly whiskers, their mouths opened revealing menacing teeth, surmounted by prominent long horns swept back behind a billowing mane, their undulating scaly bodies terminating in powerful muscular limbs and sharp claws, the dominant dragon depicted three-clawed and its subordinate five-clawed, striding amidst a continuous leafy meander bearing large stylised lotus blooms in various orientations, all below a band of pendent ruyi-heads, the rim and base bordered with a band enclosing crashing tumultuous waves against a thin, translucent, pale turquoise wash, all reserved against a brilliant lemon-yellow ground continuing over the rim into the interior, the base similarly enamelled yellow save for the unglazed footring and a white square in the centre inscribed in underglaze blue with a six-character seal mark.

Provenance: A Swiss collection since the 1970s, thence by descent.

Visually striking and extremely rare, this magnificent vase heralds the grandeur of the Qianlong Emperor and his legitimacy to the throne as the ‘Son of Heaven’. The Chinese rulers believed they ruled by heavenly mandate and every element of the present piece serves symbolically to affirm Qianlong as emperor, from the tianqiuping form to the dynamic dragon motif and yellow enamel ground. It belongs to an exclusive group of yellow-ground wares that were inspired by early-Ming blue and white porcelain. This group boasts the exceptional craftsmanship and creativity of potters working under the supervision of Tang Ying (1682-1756), the brilliant Superintendent of the Imperial Kilns in Jingdezhen, who strived to cater to the taste of the emperor. By referencing a celebrated design and form from China’s past and skilfully fusing it with a vibrant yellow enamel, the result is a spectacular piece that is at once familiar and innovative.

This vase ranks among the largest tianqiuping created during the Qing period, and no other closely related example appears to be published. Only one other vase identical in size, streamlined shape and design is known, but without the yellow enamel ground, from the Naval and Military Club and the Jingguantang collection, and sold three times at Christie’s, in London, 28th June 1968, lot 53, twice in Hong Kong, 3rd November 1996, lot 553, and 30th October 2001, lot 805, and a fourth time in these rooms, 25th April 2004, lot 309 (fig. 1). Notably, both tianqiuping also illustrate a three-clawed dragon, a direct allusion to the fifteenth century prototype, and a five-clawed imperial dragon. Compare also a tianqiuping of this form and size, but decorated with two five-clawed dragons, with a Qianlong reign mark and of the period, sold in our London rooms, 13th November 2002, lot 13; and another, of marginally smaller size and potted with a more globular body, sold in these rooms, 1st November 1999, lot 382, and twice at Christie’s Hong Kong, 27th October 2003, lot 636, and 27th November 2007, lot 1688. The form, motif and palette of this vase are rooted in imperial porcelains of the early Ming. Tang Ying’s exposure to the extensive court collection, gained from his employment by the Neiwufu (Imperial Household Department) in the Forbidden City from the age of sixteen, was essential in understanding the vision of the Qianlong Emperor and materialising it in porcelain. Named after its resemblance to a planet, the tianqiuping was first created under the Yongle Emperor (r. 1403-1424) and Tang’s versions draw from those decorated with three-clawed dragons of the Yongle and Xuande (r. 1426-35) reigns, which were produced in several different versions; see two in the Palace Museum, Beijing, one with the dragon floating amongst lingzhi-shaped clouds and the other with the dragon incised and reserved in white amid cobalt waves, illustrated in The Complete Collection of Treasures of the Palace Museum. Blue and White Porcelain with Underglazed Red (I), Shanghai, 2000, pls 87 and 88; and another depicting the dragon among lotus scrolls, in the National Palace Museum, Taipei, included in the Museum’s exhibition Mingdai chunian ciqi tezhan mulu/Special Exhibition of Early Ming Period Porcelain, 1982, cat. no. 5.

These Ming prototypes were first recreated during the Yongzheng period but, being direct imitations, they neither capture the strength of the original designs, nor are they infused with the vibrancy of the Qianlong versions; see three from the Qing court collection and still in Beijing, published in The Complete Collection (III), op. cit., pl. 81, depicting the dragon amongst lotus scrolls, pl. 102, the dragon incised and reserved in white, and 197, painted with a copper-red dragon. The dragons on these Yongzheng vases have all the characteristics found on the Ming period version: three claws and the characteristic blunt nose, strained bulging eyes beneath rich lashes and an especially pronounced antler-form horn.

The effectiveness of the present vase is a result of Tang Ying's reinterpretation of the design and form. The shoulder has been raised slightly so the body tapers down towards the foot, heightening the elegance of the silhouette. The vivid yellow ground provides an attractive contrast for the dragons that are rendered in brilliant cobalt. Although the dragons are slightly smaller than those on the Ming and Yongzheng prototypes, they retain their sense of power by being rendered primarily on the upper half of the globular body as they stride freely among the lotus scrolls, which appear to be hovering in reverence of the imperial creatures. This vase also epitomises how manipulating negative space in the overall composition helps to achieve balance and harmony. Such attention to seemingly minor details stresses the importance of these individual vases.

Another innovation is the masterful use of a transparent turquoise wash to the established blue and yellow palette, as seen on the waves collaring the mouth and bordering the foot. The cobalt and yellow combination also derives from the early Ming period, first appearing on porcelain during the Xuande period (r. 1426-1435) to result in a new genre of decoration. It is thought that such wares embellished in this fresh style formed a complete service for the Emperor, with pieces produced under succeeding Ming emperors made to replace broken originals. While the practice was revived in the Qing dynasty to adorn a greater variety of vessels, as yellow was favoured for its direct imperial association, the subtle turquoise addition complements and increases the richness of the piece; this technique is seen on a Qianlong mark and period vase, in the Palace Museum, Beijing, published in The Complete Collection of Treasures of the Palace Museum. Blue and White Porcelain with Underglazed Red (III), Hong Kong, 2000, pl. 236; and a lobed moonflask, with a Yongzheng reign mark and of the period, sold at Christie’s Hong Kong, 30th November 2011, lot 2944.

Compare another Qianlong mark and period tianqiuping, decorated with Ming-inspired fruiting branches against a yellow ground, sold in these rooms, 8th April 2014, lot 3008; and its blue and white counterpart sold in our New York and London rooms, and most recently again in these rooms, 9th October 2012, lot 121, from the collection of Alice Cheng. The predecessor to this blue and white version, bearing a Yongzheng reign mark and of the period, from the Qing court collection and still in Beijing, is illustrated in The Complete Collection of Treasures of the Palace Museum. Blue and White Porcelain with Underglazed Red (III), Hong Kong, 2000, pl. 83.

Further Qianlong vessels decorated with early-Ming inspired designs on a yellow ground include a vase and a moonflask, in the Palace Museum, Beijing, published ibid., pls 234 and 235, together with a Yongzheng mark and period moonflask, pl. 233; and several meiping, such as one, closely resembling the form of the Yongle original, sold in these rooms, 13th November 1990, lot 255; another sold at Christie’s Hong Kong, 28th April 1996, lot 56; and a pair sold in our New York rooms, 31st May 1989, lot 183. For examples of the Xuande underglaze blue and yellow originals see four dishes decorated with various fruit and flower motifs, excavated from the imperial kiln site at Jingdezhen, included in the exhibition Jingdezhen chutu Ming Xuande/ Xuande Imperial Porcelain Excavated at Jingdezhen, Chang Foundation, Taipei, 1998, cat. nos 78-2, 82-2, 85-3 and 88.

The Mandate of Heaven is a philosophical theory first used to support the rule of the Zhou dynasty kings, postulating that Heaven would bless the authority of a just ruler, but would be displeased with a despotic ruler and withdraw its mandate. As a foreign Manchu ruler in China, the Qianlong Emperor was eager to affirm his position by immersing himself in learning the philosophies, history and culture of Han China, following in the footsteps of his grandfather Kangxi (r. 1622-1722) and father Yongzheng (r. 1723-1735).