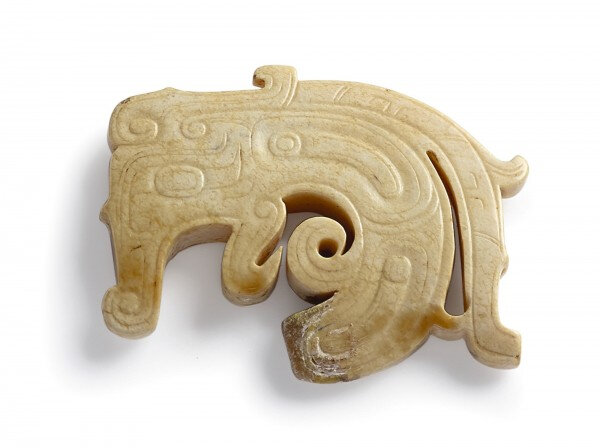 the plaque rendered as a dragon with a long curled tail, each side detailed with fine incisions depicting the mythical beast's horn, eye, wing and tail, the upper and lower edge pierced with an aperture, the stone of an even ivory colour.

Note: The present pendant, modelled as a crouching dragon with eyes in the form of chen (court official) character and the body accentuated with double-incised lines, epitomizes animal-form jades from the Shang dynasty. For jade 'dragon' pendants from the late Shang dynasty, see a few examples excavated from the famous tomb of Fu Hao, included in the exhibition Queen Mother and General: 40th Anniversary of Excavating the Shang Tomb of Fu Hao: Jade Article, Beijing, 2016, pp. 8, 10-13.