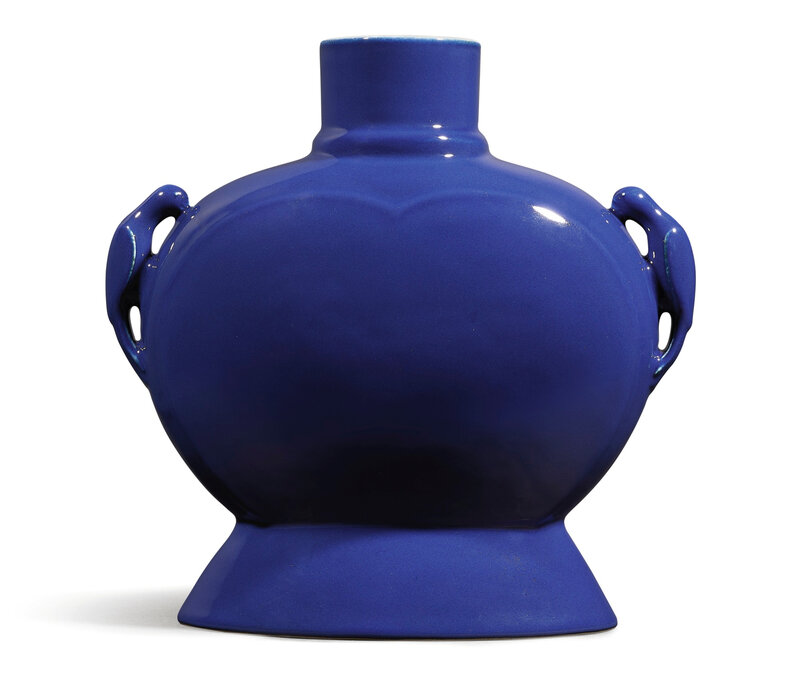 modelled after an archaic bronze form, robustly potted with two broad oval facets tapering towards a tall flared foot of oval section, the two main sides moulded with a raised panel with a slight indentation in the centre, the broad shoulders set on the narrow sides with a pair of parrots forming the handles, their high-relief bodies attached to the shoulders at the beak, feet and tail, all surmounted by a tall columnar neck collared at the base with a ring, applied overall with a deep cobalt-blue glaze, the interior and base left white, the base further inscribed with a six-character reign mark in underglaze blue.

Note: The present blue-glazed flask, after archaic bronze and earthenware flasks of the Han dynasty, belongs to a small group of wares that represent archaism in porcelain made during the reign of the Yongzheng and Qianlong Emperors. Both Emperors' fondness and connoisseurship for archaic pieces kindled their interest in the production of ceramic wares inspired by ancient shapes and designs.

Smaller Yongzheng mark and period flasks of this form served as blueprints for Qianlong examples. See a Yongzheng flask, covered in celadon glaze, in the Palace Museum, Beijing, illustrated in Kangxi. Yongzheng. Qianlong. Qing Porcelain from the Palace Museum Collection, Hong Kong, 1989, p. 273, pl. 102; and a teadust-glazed version, also with a Yongzheng reign mark and of the period, from the Salting bequest and now in the Victoria and Albert Museum, London, published in John Ayers, Far Eastern Ceramics in the Victoria and Albert Museum, London, 1980, pl. 216. While vessels of this form, made in the striking deep blue glaze remain rare, a similar but slightly smaller example was sold twice in our rooms, first in London, 29th March 1977, lot 285, again in New York, 6th November 1981, lot 315, and more recently at Christie's New York, 24th March 2011, lot 1147, from the Gordon collection. A third blue-glazed flask was sold in our London rooms, 1st/2nd April 1974, lot 277. Compare also a smaller flambé-glazed piece, with a cover surmounted by a recumbent mythical beast, included ibid., p. 450, pl. 132, with a Qianlong reign mark. The flattened globular body raised on a spreading pedestal foot of oval section, and molded on each side with a slightly raised panel of corresponding shape with central indentation at the top, with a pair of bird-form handles applied below the rounded shoulders on the narrow sides, and with a raised band at the base of the cylindrical neck, the interior glazed white, box.

Note: This rare vase is representative of the archaism frequently seen in porcelain vessels of Qianlong date. The interest of the Qianlong Emperor in archaic bronzes and antiques of all types influenced the efforts of the potters at the Imperial kilns to interpret the shapes and designs of early bronze and ceramic wares in porcelain.

The very unusual flask form of this vase appears to be a Qing dynasty interpretation of ancient prototypes made of bronze, pottery and stoneware. Bronze vessels of this flattened hu shape, bianhu, were an innovation of the Eastern Zhou dynasty, circa 400 BC, and continued to be made into the Han dynasty. A silver-inlaid bronze example of Warring States date (late 4th-early 3rd century BC) is illustrated by T. Lawton in the exhibition catalogue, Chinese Art of the Warring States Period, Change and Continuity, 480-222 B.C., Freer Gallery of Art, 1982, pp. 46-7, no. 10. This vessel has flat sides, is raised on a low rectangular foot and has a waisted neck. By the Han dynasty, bronze bianhu had a more tapering body shape and had acquired raised panels on the sides that followed the shape of the flask and had an indentation at the top of the panel. A bronze bianhu of this type, with body shape similar to that of the Gordon vase, raised panels on the sides, and spreading oval foot, is illustrated in Kandai no Bijutsu, Osaka Museum of Art, 1974, p. 24, no. 2-21. It is 27.2 cm. high and has small ring handles on the shoulder. The neck is somewhat flared, and not as cylindrical as that of the Gordon vase. Also illustrated, p. 3, no. 1-17, is a grey pottery flask (30 cm. high), modeled in imitation of the bronze prototypes, with a somewhat more rounded body, raised on a flared rectangular foot, and with small loops applied on the shoulders either side of the base of the cylindrical neck.

During the Jin dynasty, 3rd-4th century, this bianhu shape was being made in stoneware at the Yue kilns. Two such excavated examples are illustrated by Jan Fontein and Tung Wu in Unearthing China's Past, Museum of Fine Arts, Boston, 1973, p. 135, figs. 65 and 66. Also illustrated, p. 134, no. 63, is a Yue ware bianhu in the Charles B. Hoyt Collection, Museum of Fine Arts, Boston, which has a body shape similar to the excavated examples, as well as the present vase, but is missing the distinctive pedestal foot, as it had been broken off at some time in the past and the base had been polished down. Another Yue bianhu, with foot intact, from the estate of Walter Hochstadter, was sold in these rooms, 19 March 2009, lot 502. (Fig. 1) The sides of the Yue examples are flat, but the outline of the raised panels of the Han prototypes is indicated by narrow bands of punched circles. Unlike the Han prototypes, the Yue bianhu have pairs of loop handles on the narrow sides, rather than the single loops on the shoulder of the Han vessels, and the applied mask and ring handles of the Warring States vessel.

Not only the shape of the body and the distinctive pedestal foot, but also the shape of the molded panels on the sides of the present blue-glazed vase are based on the earlier prototypes. The bird-form handles are a fanciful Qing dynasty alternative to the small double loop handles applied on the narrow sides of the Yue flasks, and the single loops of the Han vessels.

Qing vases of this unusual shape appear to be quite rare, and of those published, all are monochromes. Two in the collection of the Palace Museum in Beijing are illustrated in Kangxi. Yongzheng. Qianlong: Qing Porcelain from the Palace Museum Collection, Hong Kong, 1989: a celadon-glazed example, Yongzheng mark and period, p. 273, no. 102, (Fig. 1) and a flambé-glazed example with a cover surmounted by a recumbent mythical beast, Qianlong mark and period, p. 450, no. 132. (Fig. 2) Another with teadust glaze is illustrated by J. Ayers, Far Eastern Ceramics in the Victoria and Albert Museum, London, 1980, no. 216. These and the present vase attest to the ability of the artists working at the Imperial kilns to interpret ancient prototypes in porcelain, making of them something completely new.

A Han archaic bronze bianhu with two taotie mask ring handles, the original inspiration for Qing ceramic pieces, is included in The Complete Collection of Treasures of the Palace Museum. Bronze Articles for daily Use, Hong Kong, 2006, pl. 47; and another, from the Estate of the late Alfred Chapin Rogers, was sold in our New York rooms, 17th/18th October 1974, lot 271, clearly showing the crescent-shaped grooves at the edges forming a lobed oval panel that was repeated on the porcelain pieces. See also a Han period earthenware flask of this shape, with two small ring handles on the shoulders, published in Kan dai no bijutsu [Art of the Han dynasty], Tokyo, 1975, pl. 78. Interestingly, while the Qing potter has closely copied the shape of the ancient vessel, his artistic creativity is expressed in the bird-form handles that still evoke the importance of birds during the Han dynasty but are a contemporary addition to the overall design.