the wide shallow cup of irregular form, carved on the exterior with a reticulated pine tree handle with branches extending over the rim and onto the interior, the surface further textured with low-relief ovals resembling the bark of the tree, resting on a flat base, the patina of smooth golden-amber tone, wood stand.

Note: Fashioned in the form of the bark of the pine tree with its characteristic scales and nodules, the present exquisitely carved cup is in the taste of the Chinese scholar-literati. The craftsman has formed the handle to represent a pine branch which climbs over the lip of the cup. Rarely seen on designs of this type is the small pine cone visible inside the well. The pine needles are meticulously rendered, consistent with the naturalistic detail of the whole piece.

The subject matter of the pine tree was much favoured by the literati who saw it as the symbol of their unyielding character. The rugged pine represents venerability and is an important symbol of longevity. While there are many pine-decorated rhinoceros horn cups, the present example is an especially fine one. For further cups in this group see one in the British Museum, London, included in Derek Gillman, 'A Source of Rhinoceros Horn Cups in the Late Ming Dynasty', Orientations, December 1984, p. 12, fig. 4; another from the collection of Dr Ip Yee, published in Dr Ip Yee, 'Chinese Rhinoceros Horn Carvings', International Asian Antiques Fair, Hong Kong, 1982, p. 40, pl. 38; and one with a strongly modelled pine tree with a gnarled and twisted trunk rising to form the handle, from the collection of Thomas Fok, illustrated in Thomas Fok, Connoisseurship of Rhinoceros Horn Carving in China, Hong Kong, 1999, pl. 160. 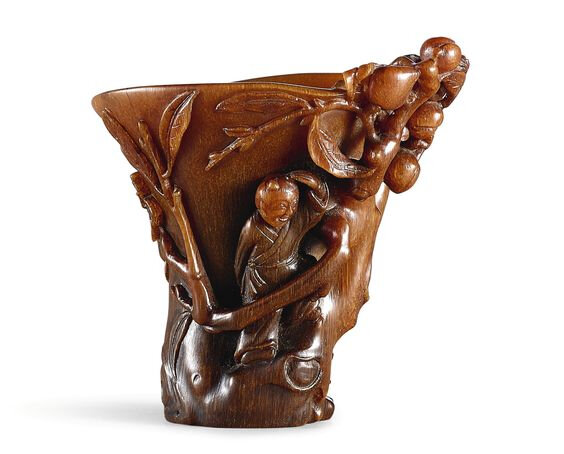 the well-polished small cup of warm amber tone, carved in high relief with the scholar Dongfang Shuo wearing long flowing robes holding a sprig of peaches, followed by an attendant on the other side of the cup surrounded by oversized peach blossoms, the back of the horn carved with a gnarled peach tree with branches extending over the rim onto the interior, wood stand.

Note: Purchased by Edward Chow in 1978, this cup attracted his attention for its beautiful light honey colouration and for the unassuming simplicity of the design that is full of auspicious connotation. Chow identifies the main figure as the Han dynasty Daoist scholar-official and court jester to Emperor Wu, Dongfang Shuo, who is accompanied by a young servant boy. The scene depicted here is the story of Dongfang Shuo stealing the peaches of eternal life from Xiwangmu (Queen Mother of the West). Dongfang is shown clutching a fruiting branch over his shoulder and looking to his side as if concerned that he may be followed. The carver has brought his subject to life by giving movement to his robe as if swept by the wind. Ironically, with this act Dongfang was able to attain immortality and became a popular figure and was frequently depicted on artefacts displayed at birthday celebrations or made as gifts. For example, see a beautiful Ming period tapestry depicting Dongfang Shuo standing by a peach tree clutching a single large peach in his hands, in the collection of the Metropolitan Museum of Art, New York, included in the Museum's official website.

The present cup is unusual for its bold yet minimalist carving of just two figures and a fruit-laden peach tree. The simple design suggests that the cup is amongst one of the earliest examples known, before it became fashionable to cover vessels with complex and intricate decorations. The flawless beauty of the material is enhanced by this perfect design. While no other similar example appears to be recorded, the Eight Daoist Immortals can be found carved around the exterior of a cup in the Chester Beatty Library, Dublin, included in Jan Chapman, 'The Chester Beatty Collection of Chinese Carved Rhinoceros Horn Cups', Arts of Asia, May-June 1982, p. 83, pl. 20. Another cup depicting the Eight Immortals, each bearing an attribute, from the collection of Thomas Fok, is published in Thomas Fok, Connoisseurship of Rhinoceros Horn Carving in China, Hong Kong, 1999, pl. 82.

The beautiful translucent light colouration and the 'orange peel' surface of this cup is remarked by Chow in his notes. This type of surface is often compared to the texture of a fine doeskin glove when it is stretched over the hand. Chapman in The Art of Rhinoceros Horn Carving in China, op.cit., p. 60, suggests that the yellow and honey colours are probably the result of the natural ageing process of the horn and some of the earliest known carvings are described as being yellow in colour. Vessels of this colouration are almost invariably associated with the best quality carvings.

exquisitely carved with flaring sides rising to an irregular rim simulating a cockscomb bloom, one side of the exterior with a handle well rendered in the form of a leafy gnarled branch issuing aster and further cockscomb blooms extending across the body and underside of the vessel forming the base, the interior with further furled leaves and one meticulously picked out aster bloom, the patina of a variegated lustrous honey-brown colour.

Note: The present rhinoceros horn cup, in the form of a blossoming cockscomb fashioned with a gnarled branch handle, is beautifully shaped and exquisitely carved. The rendering of stemming cockscomb blooms and aster in high relief fosters a sense of naturalism and liveliness in the piece. While this cup displays characteristic elements seen on flower-form vessels, it is distinctive for the elegant and skilful fashioning of the furled edges at the rim, which has successfully added another layer of three-dimensionality to the overall composition.

Rhinoceros horn cups with a cockscomb theme are rare and no other example appears to have been published. For libation cups of this type carved with serrated rims, see a funnel-shaped example in the collection of Mr. Franklin Chow, illustrated in Thomas Fok, Connoisseurship of Rhinoceros Horn Carving in China, Hong Kong, 1999, pl. 118; a cup in the form of a furled loquat leaf, sold in these rooms, 7th April 2017, lot 3644; another in the form of a lotus leaf, sold at Christie’s London, 15th May 2007, lot 45; and a fourth cup, sold in our New York rooms, 25th September 1986, lot 271.

Each plant on this libation cup has been carefully chosen to create a work of art that is both a study of nature and brimming with symbolic meaning. Cockscomb (jiguanhua) blooms in the summer and the brightly coloured blossoms resemble the comb of a rooster, hence its name.  It has a long history of cultivation in China, and in art it conveys the auspicious message for promotion in rank and success.  Aster (cuiju) on the hand, also referred to as chrysanthemum in Chinese, is emblematic of autumn and symbolises longevity. Objects of this type were treasured by the scholar-literati for their fine design as well as for their medium and message they conveyed. the flaring plain body in the form of a lotus, supported on a naturalistically carved base of ribbon-tied lotus buds and pods, the stems extending up the side of the vessel to form the handle

modelled as a large furled lotus leaf with an irregular rim, the exterior decorated with a lotus pod, budding blooms and curling leaves borne on a cluster of curling stems forming the handle on one side, the patina of a variegated honey-brown colour.

the exterior carved with a continuous scene depicting lotus blooms and leaves borne on long curling stems, below two egrets flying below the rim, all above streams of water forming the base and centred with a fish. hollowed in the form of a peach, borne on curved stems of flowering and fruiting peaches around the exterior, with a chilong clambering above the rim on one side forming the handle, the horn of a rich reddish-brown tone.

naturalistically carved in the form of a lotus pod emerging from broad petals forming the cup, borne on curved stems with a veined leaf forming the base, the horn of an attractive honey-brown tone.