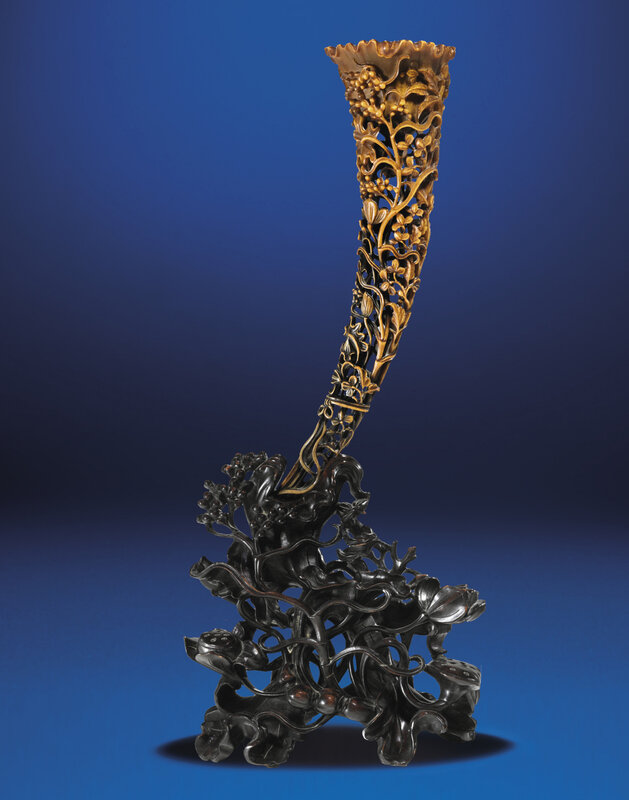 The large tapering cup with an irregularly-shaped rim is boldly carved in openwork utilising the natural curve of the horn with a magnolia vine bearing blossoms interwoven with a berry-laden vine. The horn is of honey-brown tone. The wood stand is carved with lotus pods and flowers supported on a large lotus leaf, wood stand.

Provenance: Sold through an auction at the Leland Stanford Museum 1954
Acquired in 1954 and thence by decent within the family. Note: An example of these extravagantly carved full-tip cups in the Duham University Oriental Museum Collection is illustrated by J. Chapman, The Art of the Rhinoceros Horn Carving in China, London, 1999, p. 72, no. 38 (72.5 cm. long). It is noted that these very large rhinoceros horn cups of this type were almost certainly made in Canton during the late 19th century, and commissioned by European traders, cf. op. cit., p. 73. The inspiration of these elaborate carvings was probably influenced by those of the late Ming period, such as the reticulated example carved from tip to rim and into the interior, from the Palace Museum Collection, illustrated Bamboo, Wood, Ivory and Rhinoceros Horn Carvings, The Complete Collection of Treasures of the Palace Museum, Hong Kong, 2001, pp. 146-147, no. 131 (37.4 cm. long).