The Orientalist Sale pulls in to London

The Orientalist Sale pulls in to London

LONDON.- The Orientalist Sale, launched as an annual event by Sotheby’s in London in 2012 and now in its seventh season, brings together paintings and sculpture representing the landscapes, people, and customs of North Africa, Egypt, the Levant, Arabia, and the Ottoman world during the 19th and early 20th centuries. Comprising over 60 lots, this year’s sale on 24th April features exquisite works which provide fascinating historical insights into the Arab, Ottoman, and Islamic worlds of the time. Exhibited alongside the Arts of the Islamic World auction as part of Orientalist & Middle Eastern Week, together the two sales offer an opportunity to unite Orientalist paintings with luxurious works of art from countries under Islamic patronage.

Claude Piening, Sotheby’s Head of Orientalist Paintings, commented: “This year’s offering of Orientalist art is the largest ever assembled since the inaugural sale seven years ago. We’re thrilled to present rediscovered works by masters of the genre alongside a small group of paintings which come to auction from a distinguished private collection, as well as charming scenes of everyday life in the region, all of which are available at different price points. With many of the works unseen on the market for decades, the sale is a wonderful opportunity for collectors to get their hands on pictures which have remained out of sight for so long.” 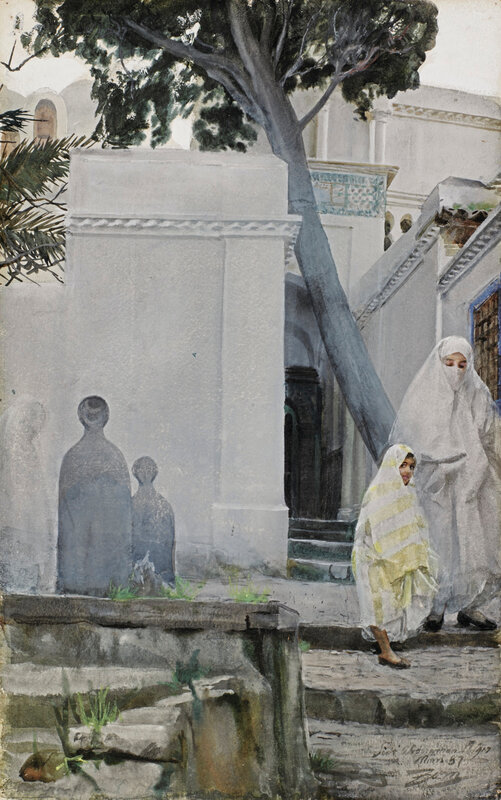 This rediscovered work, executed in March 1887, belongs to the small series of watercolours Zorn made in Algiers, during an extensive journey with his wife Emma to Constantinople, Greece, Italy, and North Africa. The artist depicts the Sidi Abderrahman Mosque in Algiers, Algeria, painted five years earlier, in 1882, by Pierre-Auguste Renoir. This work shows Zorn’s mastery and virtuosity in the medium of watercolour which first brought him fame. This monumental view of the inner gate of the Kasbah of Oudaïas in Rabat was painted during Weeks’ third trip to Morocco with his wife Frances Rollins Hale, taking in Tangier, Tetuan, and Rabat. In Rabat, Weeks became fascinated by the kasbah, a fortified citadel built in the twelfth century during the time of the Almohad Caliphate (AD 11211269). The gate was a spectacular example of highly ornamented Almohad architecture, characterised by a horse-shoe arch and intertwined arabesques which conveyed elegance and grandeur. Morocco’s imposing city gates formed the backdrop to several major French Orientalist works by Eugène Delacroix and Benjamin-Constant. 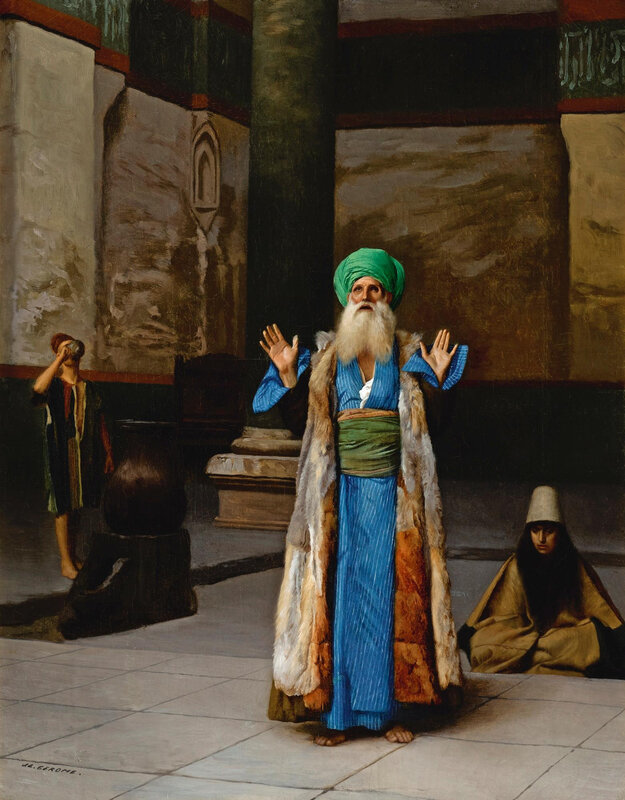 A respectful and moving observation of a man of high rank worshipping God, this recently rediscovered work stands out not just by virtue of its exceptional detail and palette, but on account of the frontal view, rare in the artist’s work in which worshippers are predominantly seen from behind or in profile. Gérôme’s fascination with Muslim prayer began from the moment he set foot in Constantinople in 1852, and Egypt in 1856, and would become a central tenet in his oeuvre. Here, a single figure stands silhouetted against a darkened yet architecturally distinctive backdrop, his silken robes crafted from the most vibrant confectionary of colours and his fur gown rendered in photographic detail. His only company is a seated man, possibly a dervish, also in prayer, and an attendant drinking from an urn. The colour palette of blue and turquoise may also well have been an inspiration to the Ottoman Orientalist painter Osman Hamdy Bey, who met Gérôme in Paris in the 1860s. 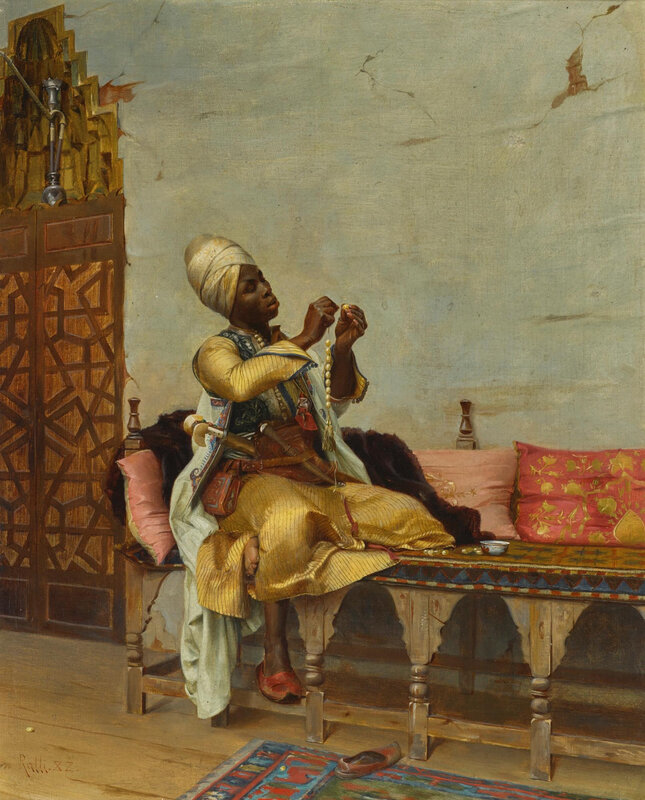 Stringing Pearls is a rediscovery in Ralli’s oeuvre, and perfectly captures the artist’s exceptional skill at depicting intimate scenes of daily life in Egypt. Seated on an ornamented wooden bench adorned with elegant silk cushions, a Nubian man dressed in yellow silk carefully strings white teardrop pearls into a necklace. Picking them one by one from a small ceramic bowl, he appears fully concentrated on his task, unaware that he has dropped two on the floor. Pearl cultivation and the pearl trade were integral to the Middle East region’s economy before the discovery of oil and gas, and the advent of industrially produced pearls. Fashioned into necklaces and bracelets, or to embellish jewellery, natural pearls supplied from the region were prized by jewellers all around Europe. In this rediscovered panoramic view, animated figures crowd around the Sultan’s sage or fortune teller on the steps of the gate of the Kasbah in Tangiers. Dehodencq moved to Morocco by way of Spain in 1853, and settled there from 1854 until 1863, during which time he produced many of his most famous paintings of Moroccan life. All of them are distinguished by their intense colour palette and sense of dramatic movement. This work was probably acquired by its first owner, Sir John HayDrummond-Hay, while he was serving in Tangiers, and it has remained in the Drummond-Hay family ever since. Bashi-bazouks were irregulars in the Ottoman army and hailed from lands across the Ottoman empire, from Egypt to the Balkans. The two soldiers, in all their regalia, converse in an Egyptian setting, the gate topped by Mamluk carvings and flanked by East African ‘Grandees’ chairs’, amalgams of Mamluk, Portuguese, and Indian influence. Both men are armed with Ottoman flintlock rifles from Algeria, and the standing guard smokes an Ottoman chibouk pipe with a tophane bowl. On the left, a seventeenth-century Ottoman Tulip-period Tombak ewer rests on the arm of one of the chairs. Discart captures his subject, a cobbler watched by his companion, in a moment of rapt concentration, conveyed by his expression and expert hand. The craftsman is surrounded by objects and products of his trade painted in exquisite detail: all manner of babouche slippers, a pair of soft kidd boots, and his stitching kit. The result is a fascinating evocation of a Moroccan street scene, with references to the town’s architecture in the form of the white washed houses and a magnificent riveted copper door. Along with Ludwig Deutsch and Rudolf Ernst, Discart established himself as one of the foremost Vienna-trained Orientalist painters of his day. 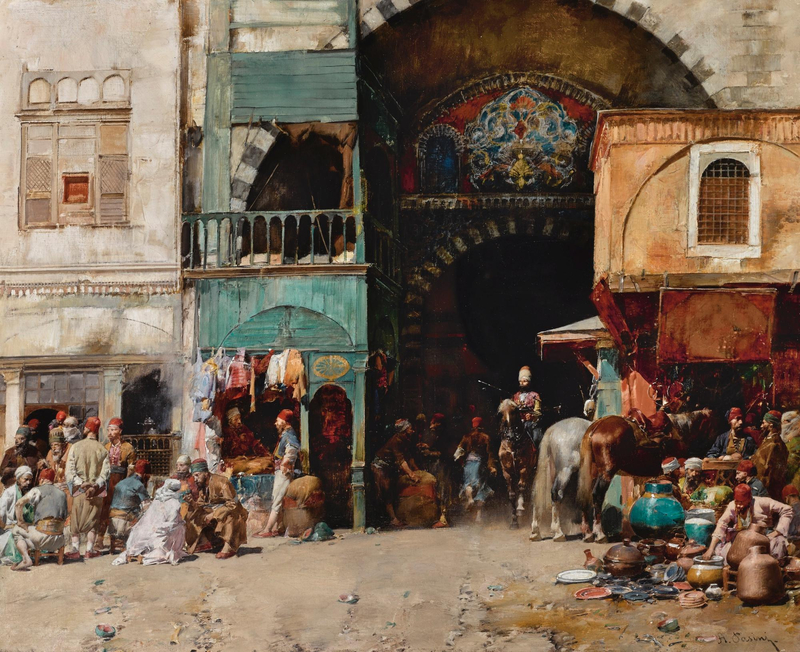 Market in Constantinople epitomises Pasini’s carefully observed, naturalistic market scenes, capturing the hustle and bustle and diversity of the mercantile city. The composition is distinguished as much by the artist’s fine draughtsman as by the vivid palette, punctuated by brilliant turquoises, pinks, and greens. The exact setting is not known, however it may have been inspired by the entrance to the Mısır Çarşısı, also called the Egyptian or Spice Bazaar. Pasini first travelled to Constantinople on his landmark journey to the East in 1855, which began his career as an Orientalist painter. In this work Pasini deploys his observations of life in the Ottoman Empire: traders setting out their wares, tethered horses, a rider emerging from the shadow of the gate, and groups in animated discussion or negotiation. Scenes of prayer occupy a central position in nineteenth-century Orientalist art. Evening Prayers is not only a splendid evocation of the North African desert, but affords a fascinating glimpse into the rituals of Muslim worship. In the cool shade cast by the building behind them, a group of men on a rooftop face Mecca in prayer. In 1874, Girardet embarked for Morocco, then travelled to Tunisia and Algeria, for which he developed a particular fondness. He spent subsequent visits in Algiers and Boghari, but above all in El Kantara and Bou-Saâda, in the foothills of the Saharan Atlas, painting scenes of daily life. Painted in 1887, this street view of Cairo is a striking example of the nineteenth-century Orientalist views which opened up a new world to European viewers. The hustle and bustle of women carrying water jugs and snake charmers, rendered with photographic realism, brilliantly evoked the souks and streets of a city beyond the reach of many. In the background, the striated red and white brick buildings so typical of the Egyptian capital inspired artists and architects alike. Like many of his fellow Orientalist painters, Wilda travelled to Egypt in the early 1880s and set up a studio in Cairo where he developed a keen interest for the depiction of everyday Egyptian life. Set just outside the gates of Constantinople’s Topkapı Palace, the fountain of Ahmed III was built in 1728-9, during the Tulip Era (socalled because of the popularity of this flower and the flourishing of the arts in the Ottoman Empire between 1718 and 1730). There are water taps set into the shallow niches on each of the four sides, and at each corner is a sebil, or kiosk, where drinking water was dispensed in cups to passers-by. Each sebil has three tall windows which, as Ernst’s painting attests, are covered with elaborate bronze lattices. Erected across the city as acts of charity by notable families, these monuments soon became the favourite gathering places of traders, travellers, and townspeople. Ernst travelled to Constantinople in the 1870s and would have been familiar with this - even at that time - famous site. In this richly finished work, a turbaned man pours oil into glass receptacles suspended from an ornate nineteenth-century Syrian bronze lantern stand. The fuel in the glasses can then be lit using wicks to create a circle of lights. The figure is framed by blue and green Moroccan octagonal tiles and inlaid marble wall panels in a Moorish setting. A veritable tapestry in pattern and texture, the composition is a cumulative memory of Ernst’s disparate travels in the Orient. After studying at the Vienna Academy, he travelled to Rome and, in the 1880s, to Andalusia, Morocco, and Tunisia. Later travels would take him to Egypt and, in 1890, to Turkey. From 1885 Ernst turned exclusively to painting Orientalist subjects, which he worked up from the sketches, photographs, souvenirs, and memories accumulated during his travels. Almost all his paintings were executed in his studio in Paris, which he decorated in an eclectic Eastern style, and in which he would paint wearing a taboosh, the better to transport himself mentally into the world created in his panels and canvases.

Commentaires sur The Orientalist Sale pulls in to London