LOS ANGELES, CA.- The ancient city of Palmyra (“Place of Palms”), well situated in an oasis in the Syrian desert, flourished between the first and third centuries AD. At the crossroads of trade routes between the Roman and Parthian Persian empires, the people of Palmyra embellished their tombs with distinctive funerary portraits that illuminate the rich cultural exchanges and interactions taking place throughout the eastern Mediterranean and Near East.

Palmyra: Loss and Remembrance, on display as a long-term loan at the Getty Villa from April 18, 2018 through May 27, 2019, presents a selection of the finest surviving Palmyran funerary portrait sculptures from the unrivalled collection of the Ny Carlsberg Glyptotek in Copenhagen. The exhibition will also include historical engravings and photographs from the Getty Research Institute that represent the earliest photographic record of this unique archaeological site.

As part of the reinstallation of the antiquities collection at the Getty Villa, this exhibition will be the first display in a new gallery dedicated to “The Classical World in Context,” which will present long-term loans of objects from cultures that engaged and interacted with the ancient classical cultures of Greece and Italy. 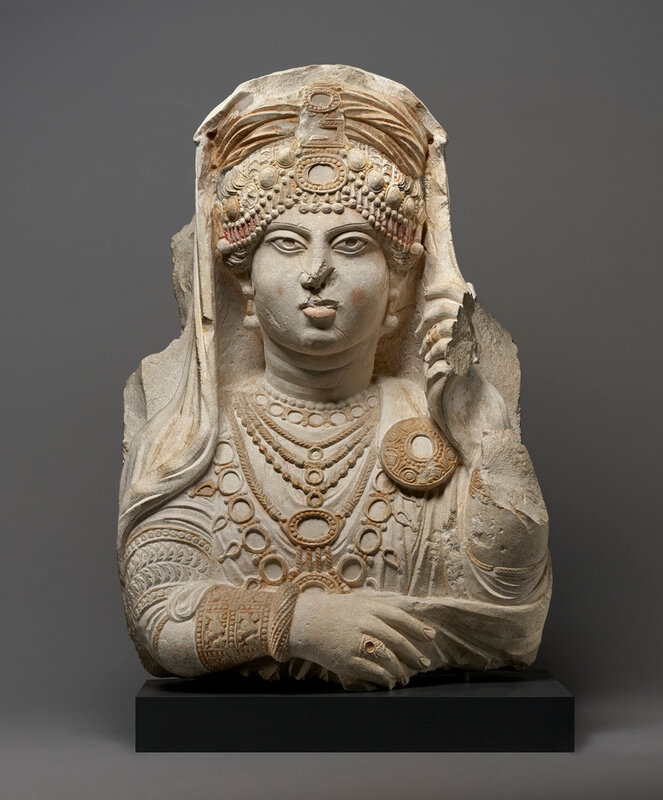 “Control of the Near Eastern lands conquered by Alexander the Great in the 320s BC gradually shrank back to Syria and the eastern littoral of the Mediterranean, where it remained into the first centuries of the Roman Empire. But the influence of Greek and Roman art in the further reaches of Alexander’s conquests lingered much longer, and we see remarkable efflorescences of classicizing sculpture in the first centuries AD in Parthia (Mesopotamia and Persia), Gandhara (Pakistan), and, closer to the Mediterranean, at Petra and Palmyra,” says Timothy Potts, director of the J. Paul Getty Museum. “The remarkable works of art from the latter site are the most vivid artistic evidence of a cosmopolitan, polyglot, and multicultural world that flourished in the first centuries of the Christian era. Sadly, much of this extraordinary artistic heritage has been the subject of horrendous vandalism in recent years—which makes those works that survive even more precious.”

The people of the ancient city of Palmyra grew rich transporting silk, spices, gems, and other commodities, as well as slaves, by caravan to the Mediterranean from Persia, India, and as far east as China. Grand temples, colonnaded streets, and richly decorated communal tombs attest to Palmyra’s period of great prosperity. Ornamented tombs contained expressive likenesses of men, women, and children accompanied by inscriptions naming the deceased. Details of their dress, jewelry, and other attributes reveal the city’s distinctive cultural mix of Greek, Roman, and Parthian (ancient Iranian) culture. Inspired by their Greek and Roman neighbors, Palmyrans made and publicly displayed portraits honoring the deeds of important citizens. Most surviving sculpture from the site, however, consists of funerary portraits commemorating the dead. Reliefs carved from local limestone and then brightly painted were arranged in rows within monumental tombs. They were used to seal loculi (individual burial niches) within towers, hypogea (underground chambers), and mausolea (temple-like structures) where hundreds were buried in vast galleries of multi-generational family portraits. Most reliefs bear inscriptions in Palmyran Aramaic expressing grief for the loss of the deceased, naming family members, and, in some cases, providing lengthy genealogies.

The Palmyran custom was to depict the deceased finely clothed and gazing forward. Men usually appear in tunics and Greek-style cloaks; their professions are rarely indicated, though priestly status is noted. In early reliefs, women hold a distaff and spindle for spinning wool—traditional symbols of female virtue. With time, female portraits included rich displays of jewelry and changing hairstyles, likely reflecting the increasing wealth, growing trade connections, and evolving fashions of the city. Although Palmyran reliefs usually present their subjects with generic features and neutral expressions, they nonetheless reveal deliberate and individualized choices. Those who commissioned and carved the portraits selected from a repertoire of hairstyles, clothing, gestures, jewelry, and other meaningful attributes. In commemorating the dead, they sometimes also included representations of other family members. Palmyran portraits—while less naturalistic than Roman sculptures of the time—embody familial aspirations and communal values as well as personal emblems of those they represent.

“These vivid personal portraits bring the viewer face-to-face with ancient individuals and their families, expressing their values and reflecting developing social trends,” says Kenneth Lapatin, curator of the exhibition. “At the same time, they convey ancient cosmopolitanism and connections between diverse cultures.” 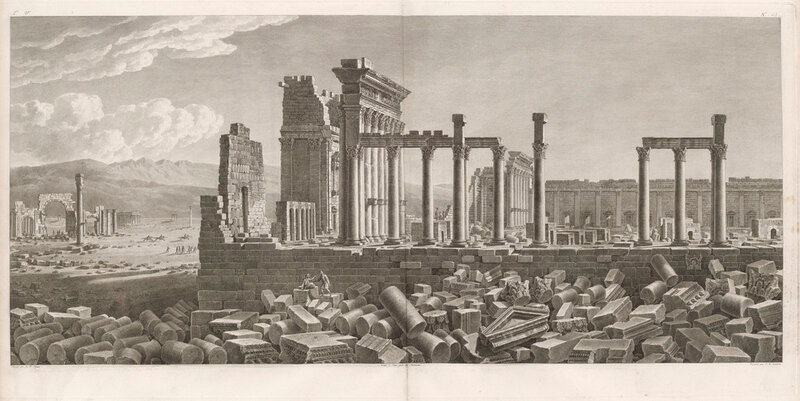 Designated a UNESCO World Heritage site in 1980, the ancient buildings of Palmyra have inspired Western artists and architects since the late 1600s. Though the monuments of Palmyra survived for millennia, the site has suffered greatly in the current Syrian civil war, which has resulted in thousands of deaths and the deliberate destruction of buildings and artifacts. Recently acquired by the Getty Research Institute and on view for the first time, are well-preserved photographs of the site taken in 1864 by Louis Vignes, a French naval officer who was trained in photography by the renowned photographer Charles Nègre. The earliest photographic record of the site, these photographs include unique views and panoramas of Palmyra’s Roman ruins, some of which are now destroyed. 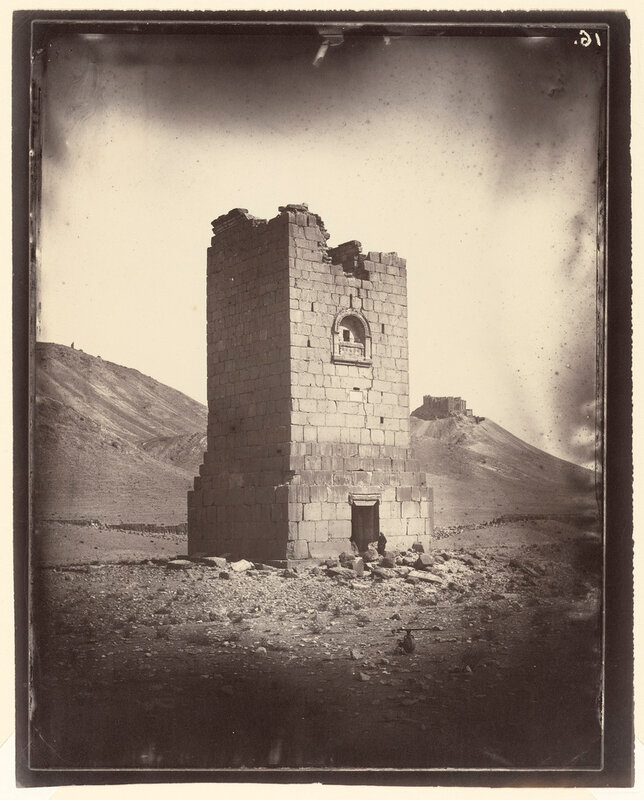 Another highlight of the exhibition is a double relief of a father and son, which was broken in half and sold separately sometime before 1880, and will be reunited in the exhibition for the first time. In 1880, Leland Stanford Jr. purchased one half in Rome. Today, it is in the collection of the Iris & B. Gerald Cantor Center for Visual Arts at Stanford University. In 1929, the Ny Carlsberg Glyptotek acquired the other half from a collector in Beirut. In 2012, former Getty scholar Fred Albertson recognized that part of the younger man’s shoulder, as well as the branch that supports the dorsalium (funerary curtain) behind him, is preserved on the slab depicting the older man. The similar carving of the faces, drapery, and inscriptions confirmed that the two pieces belong together. Palmyra: Loss and Remembrance is curated by Kenneth Lapatin, curator of antiquities at the J. Paul Getty Museum in collaboration with Rubina Raja, director of the Palmyra Portrait Project and professor of classical art and archaeology at Aarhus University, and Anne Marie Nielsen, curator of Greek and Roman art at the Ny Carlsberg Glyptotek.