of lobed form and finely potted, the gently sloping sides rising from a short spreading foot to an everted rim, deftly carved to the interior with scrolling leafy lotus sprays, applied overall with an even ivory-coloured glaze with characteristic teardrops at the base, the rim mounted with metal, Japanese wood box. Quantity: 2.

Note: This bowl is a fine example of Ding ware, evident in its masterful potting, swiftly and confidently carved design and exquisite glaze. Ding ware is renowned for their thin potting and fine white body, which does not require a coat of slip to appear white after firing, which was covered in a transparent ivory coloured glaze. Potted into elegant forms, some of which derived from contemporaneous silver and lacquer shapes, many others – like the present form – were independently developed by the potters, and found favour with the court and wealthy monasteries during the Northern Song and Jin (1115-1234) periods. Due to the fragility of their thinly potted body that was prone to warping during the potting and firing stages, Ding bowls of this type often measure around 22 cm in diameter.

The restrained, yet flowing lines of the carved decoration successfully capture the spirit and grace of the lotus flower, like brush strokes in contemporary ink painting, while accentuating the refined quality of the porcelain body. Symbolic of purity and integrity as it rises clean out of muddy waters, the lotus was a popular motif throughout the Song dynasty (960-1279) due to the Confucian value of personal virtue, and frequently appeared on white-glazed Ding wares, whose pure glaze tone enhances the flower's message. 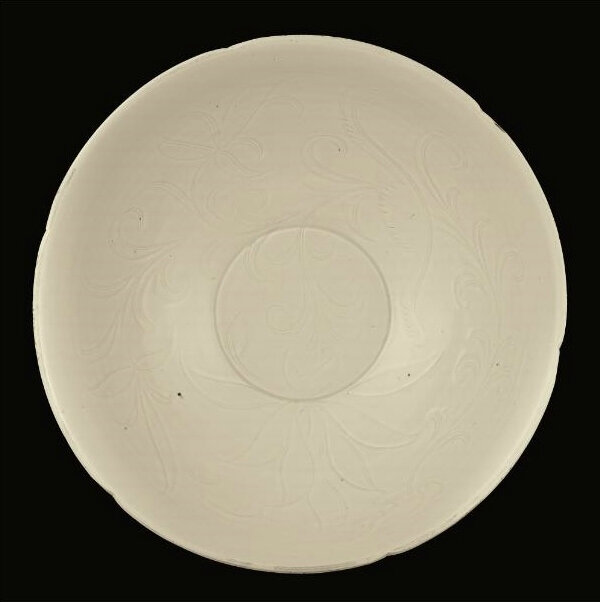 The skilfully applied copper band on the current bowl is representative of the popular taste of the time. The well-known record in a Song text that the court did not appreciate Ding wares because of their unglazed rims, and ordered wares from the Ru kilns instead, has been discussed by Ts'ai Mei-fen of the National Palace Museum, Taipei, at a symposium organized by the Metropolitan Museum of Art, New York, in 1996. She argued that unglazed rims were not the consequence of the kilns' practice of firing bowls upside down, but that 'the reason for the unglazed rim was that the metal-banded rim was the popular taste of the time', approved even at court, and that 'the practice of covering edges ... began well before the Ting [Ding] kiln started firing its ware upside down. The practice was not introduced to cover up the unglazed rim, but, on the contrary, the unglazed rim was possibly instituted because of the popular practices of decorating edges'. She states that the Wensiyuan (Crafts Institute), a workshop for the production of jewellery under the Directorate for Imperial Manufactories, as well as the Houyuan Zaozuosuo (Palace Workshop of the Rear Garden), another workshop that produced articles for use in the inner court, both included a Lengzuo workshop, for the 'decoration of edges'. Ts'ai suggests therefore that the quote does not refer to imperial taste but to the fact that metal-bound vessels were not considered suitable for certain imperial ritual ceremonies. See Ts'ai Mei-fen, 'A Discussion of Ting Ware with Unglazed Rims and Related Twelfth-Century Official Porcelain', Arts of the Sung and Yüan, The Metropolitan Museum of Art, New York, 1996, pp. 109-31.