the gently rounded sides rising from a straight foot to a slightly incurved rim, covered overall in a lavender glaze thinning to an olive colour at the rim and splashed with copper, the interior with six purple splashes, the exterior with five, the glaze falling short of the footrim with an olive tinge, revealing the greyish buff body.

Note: Potted and glazed to sit effortlessly in the hand, this striking bowl epitomises the aesthetic and literati spirit of the Song dynasty (960-1279). Its simple yet robust form and bold, irregular purple splashes had an immense appeal to the literati and nobility of the time due to their simple yet flamboyant, calligraphic effect, giving each vessel decorated in this manner its unique design.

Since the Northern Qi (550-577) and throughout the Tang (618-907) and Song (960-1279) dynasties Chinese potters in many different manufactories created wares decorated with irregular splashes in contrasting glaze colours. The copper-red streaks on blue Jun wares, however, differ from the rest: they are not fortuitous drips and splashes, but colour patterns that were applied with deliberation. Rose Kerr in Song Dynasty Ceramics, London, 2004, p. 34, notes that the splashes found on Jun wares were made with the application of copper in broad brush strokes or washes over dry bluish glazes, which then merged when fired at full heat. Like an abstract painting, the success of the overall effect therefore depends on the motion of the brush that dictates the distribution across the surface, and on the relative 'weight' of one colour in relation to the other. This challenge has been superbly managed on the present bowl.

Similar examples are included in some of the world's most prestigious collections of Chinese ceramics, including one in the Palace Museum in Beijing, illustrated in The Complete Collection of Treasures of the Palace Museum: Porcelain of the Song Dynasty (I), Hong Kong, 1996, pl. 222; and another sold in our New York rooms, 15th September 2010, lot 303. Bubble bowls with larger vibrant areas of splash on the interior include one from the Eumorfopoulos collection and now in the Victoria and Albert Museum, London, illustrated in Rose Kerr, Song Dynasty Ceramics, London, 2004, pl. 26; another from the Sir Percival David collection and now in the British Museum, London, published in Stacey Pierson, Illustrated Catalogue of Ru, Guan, Jun, Guangdong and Yixing Wares in the Percival David Foundation of Chinese Art, London, 1999, pl. 44; and a third bowl sold in these rooms, 8th November 2006, lot 55, and offered in our Hong Kong rooms, 3rd April 2018, lot 3605. Two famous 'Jun' bubble bowls from the Edward T. Chow collection, perhaps the best extant examples, were both sold in these rooms, 16th December 1980, lots 264 and 265, and again in these rooms, the former on 19th May 1987, lot 209, and later in the T.T. Tsui collection; the latter on 7th June 2000, lot 93. 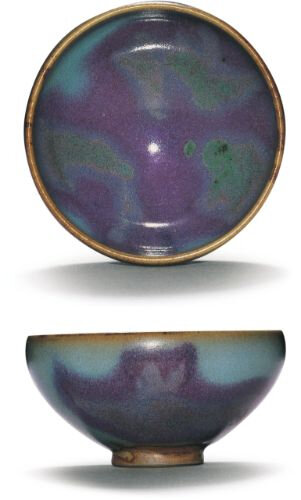 'Jun' ware, the most spectacular of the major Song dynasty wares, with its type site represented by the Juntai kilns in Yuzhou, Henan province, was produced by many different manufactories in Henan, including the Ru kilns at Qingliangsi in Baofeng, probably from the end of the Northern Song period (960-1127) until at least the Ming dynasty (1368-1644).