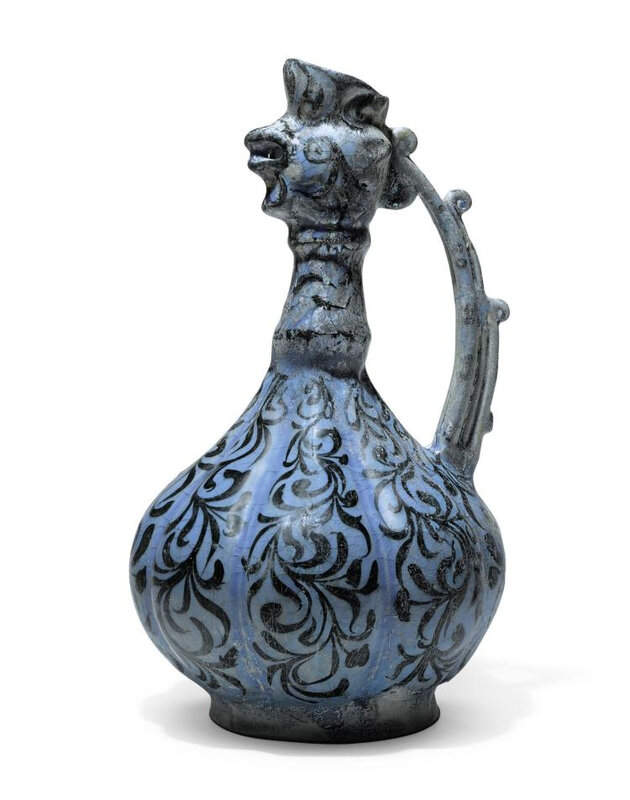 of elongated baluster form, the body narrowing to a neck with flaring mouth in the form of a rooster's head with black details for eyes and crown, with curved, feather-like handle, the body decorated with bulbous drop form designs, each containing black tendrils.

Note: This bird-headed ewer is of a rare form which perhaps finds its genesis in Persian metalwork of the period. A comparable example is in the David Collection, Copenhagen, inv. no.ISL 23. The water-weed design which embellishes this example first appears in Persian underglaze-painted wares in the early thirteenth century. These wares, decorated using a brush, superseded the earlier and more-labour intensive slip-carved 'Silhouette wares'. The brush had several advantages over the knife: not only did it speed up the design process, but it also allowed for more fluid and painterly decoration, such as on this example. of deep form with flaring walls on a low foot, intact, decorated in underglaze cobalt blue with black under a transparent colourless glaze, with a central inscriptive roundel with six radiating black ribbon bands, each with a line of cursive naskh script, the interstices with large palmette and seaweed motifs, the exterior with foliate sprays. the frit body with moulded decoration featuring a griffin-like bird attacking its prey and parts of a bold Kufic inscription, with foliate details, under a turquoise glaze.

Inscriptions: Possibly: ‘And joy and wealth (?)’

It is rare to find examples of moulded decoration under a turquoise glaze on a monumental scale such as this jar. A comparable piece, in shape and decoration, under a turquoise glaze, is in the Metropolitan Museum of Art, New York (inv. no.39.189). Measuring eighty centimetres, it was designed with three registers below a calligraphic line at the neck. It features winged griffins, a favoured Seljuk bird, which help us to identify the birds on the present example. 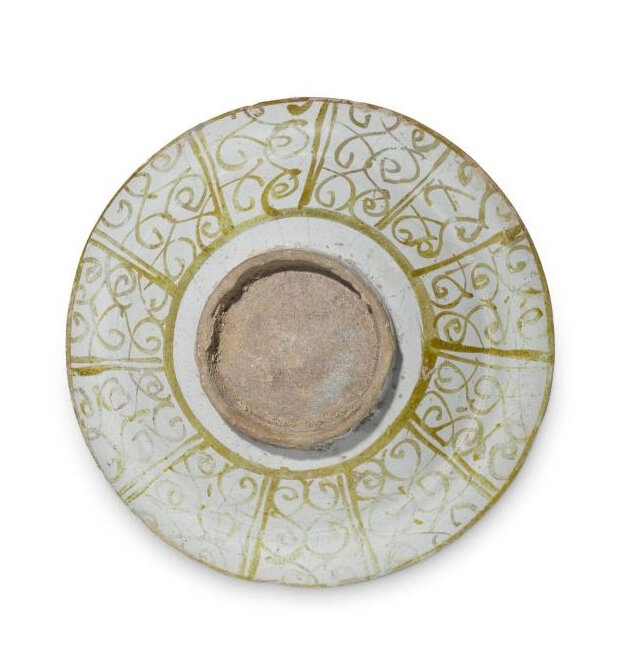 of shallow rounded form with a slightly everted rim on a short foot, intact, painted in light lustre with two birds in the centre surrounded by a foliate border, with a pseudo-calligraphic band near the rim, the exterior with scrolling details.

Inscriptions: A repeat of a few letters, possibly: al-‘izz ‘Glory’ or a part of al-bara[kah] ‘Blessing’. of truncated conical form with flaring walls, intact, on a straight vertical foot, painted in a deep honey-coloured lustre, the interior with radiating bands alternating between lustre on white and white on lustre inscriptions, the exterior with a large band containing stylised scrolls. the frit body of baluster form with a compressed globular base resting on a short foot, the narrow tapering neck joined to a wide flaring fluted mouth of tulip form, decorated in dark blue glaze with a moulded calligraphic and foliate design on the curving shoulder.

Inscriptions: ‘Blessing and good-fortune and joy and happiness and...’