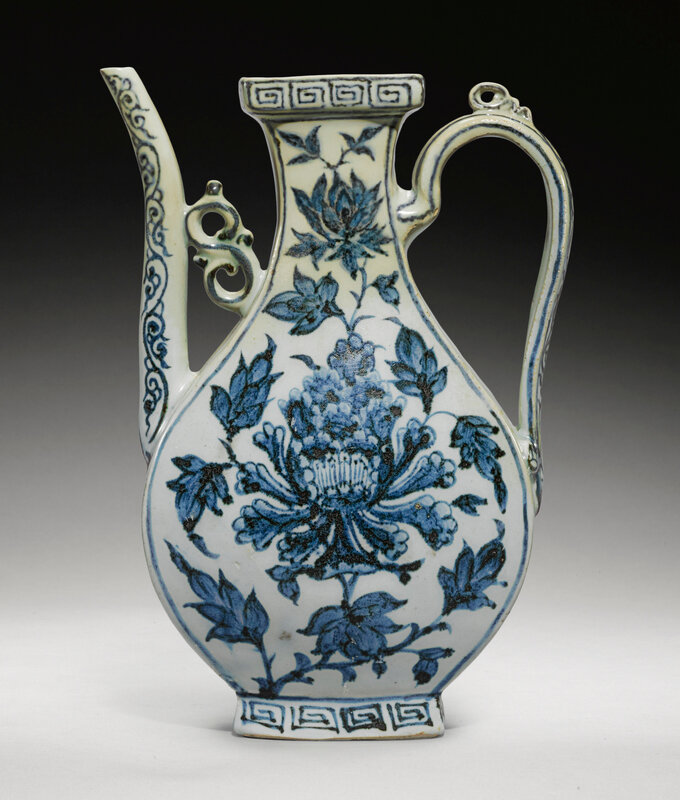 based on a Persian metal form, the flattened pear-shaped body of rectangular section and painted in vibrant cobalt-blue tones on one side with a leafy peony blossom and a leafy hibiscus spray on the other, set with a handle with an eyelet and ruyi terminal and a long spout painted with cloud scrolls and secured by an S-shaped strut, the foot and rim encircled by a keyfret border.

Note: Ewers of this form are rare and no other example with this archetypal Yuan decoration appears to have been published. Compare a ewer of related form, but decorated with a scene of ducks in a lotus pond, excavated in Egypt in the early 20th century, illustrated in Takatoshi Misugi, Chinese Porcelain Collections in the Near East, Topkapi and Ardebil, vol. 1, Hong Kong, 1981, p. 37 (top); and another potted with peach-shape panels depicting a dragon in pursuit of a flaming pearl on either side, sold in these rooms, 16th June 1999, lot 787. This ewer shape is better known from Longquan celadon examples; for example see one from the Edward T. Chow collection sold in these rooms, 16th December 1980, lot 308.