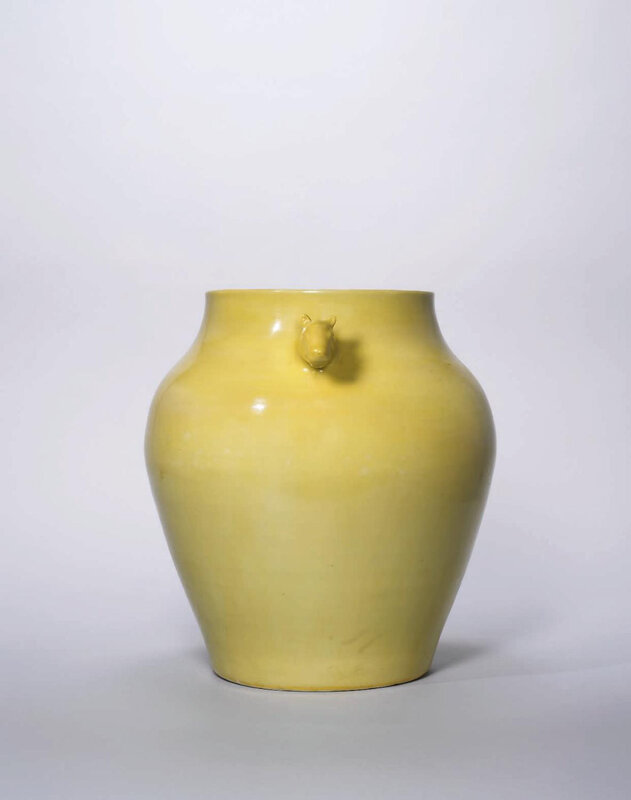 The jar is glazed overall in an attractive pale yellow enamel, with a pair of animal-mask handles to the sides.

Provenance: Acquired in Taipei circa 2004.

Hongzhi imperial porcelains are significantly rarer than those of the preceding Chenghua reign. The Hongzhi Emperor was the third son of the Chenghua Emperor, but his spending appears to have been much more restrained than that of his father. The Ming shilu, Xiaozong shilu 明實錄 孝宗實錄 states that following the death of the Chenghua Emperor in the 9th month of 1487, Xiaozong (who became the Hongzhi Emperor) entered into the appropriate period of mourning and issued an edict requiring that all extraneous production was halted, and recalling the eunuchs from the Imperial kilns at Jingdezhen to the capital. It seems that there was a period at the beginning of the Hongzhi reign when there was no official production at Jingdezhen, and even after official production was resumed, it remained at a modest level. A jar of the current type would have been intended for ritual use, but most of the Hongzhi yellow porcelains surviving in international collections are bowls and dishes, and even shards are rare. However, a fragment of a yellow bowl with a Hongzhi mark and a glaze of similar colour and texture to that of the current jar, was excavated from the imperial kilns at Zhushan, illustrated in Ceramic finds from Jingdezhen Kilns (10th-17th Century), Hong Kong, 1992, no. 249.

With the return of Chinese rule at the beginning of the Ming dynasty and the enthronement of the Hongwu Emperor (AD 1368-98), monochrome ceramics made for the court took on some of the roles previously reserved for bronzes - they were used for state ritual. As early as the second year of his reign in 1369 Emperor Hongwu re-established imperial production at the Jingdezhen kilns in Jiangxi province. In the Ming Shi (明 史 History of the Ming Dynasty) it is also recorded that as early as the first year of his reign (1368), the Hongwu emperor decreed the number and type of ceremonial vessels to be used on the altar in the Taimiao (太 廟 the Temple of the Imperial Ancestors). Although the material from which the vessels were to be made was not specified in most cases, there were two exceptions. The Hongwu emperor required that there be eight gold jue (爵 libation tripods) vessels and sixteen porcelain jue. It is noted in the Da Ming Huidian (大明會典 Collected Statutes of the Ming Empire, 1587 edition, 卷 juan 201) that in the second year of the Hongwu reign (1369), the Hongwu Emperor went a step further, and issued an edict saying that all ceremonial vessels used in state sacrifices should be made of porcelain. The same edict is recorded in the Ming Shi (juan 47). This text also states that in the third year of the Hongwu reign (1370) the Ministry of Rites noted that:

‘Following instructions laid down in the ancient Li Ji (禮記 Book of Rites), ceremonial vessels used for state sacrifices should be made either of clay or gourds.’

Thus, it was implied that it was in order to accord with the rules laid down in antiquity that the Ming court had to use porcelain ceremonial vessels, although the move towards replacing the bronze ritual vessels with those made from porcelain was undoubtedly driven in part by the need to conserve the copper, which would otherwise have been used in the manufacture of bronze vessels.

Although at the beginning of his reign the Hongwu emperor performed sacrifices to the gods of Heaven at the Huanqiu (圜丘 Circular Mound) in the southern part of Nanjing at the winter solstice; and sacrifices to the gods of Earth at the Fangze (方澤 the Square Mound) in the northern suburbs of Nanjing at the summer solstice, in 1377 he decided to combine these sacrifices into a single event (known as 合祀 Hesi) at a shrine called the 大祀殿 Dasidian, built on the site of the original Huanqiu (Circular Mound). According to rules laid down in the Zhou dynasty (1027-221 BC), items associated with sacrifices to Heaven should be blue, while those associated with sacrifices to Earth should be yellow. Therefore, the tiles and pillars of this new building were blue and yellow, and it is likely that these colours were also reflected in the porcelains made for use in the ceremonies conducted there. No finds of yellow or blue porcelains from the Hongwu strata at Jingdezhen have yet been published, but small blue fragments were found amongst the Hongwu remains at the Ming palace in Nanjing.

A yellow Hongzhi jar of this type, with some residual gilding in the form of narrow lines at intervals around the body, from the Qing Court Collection, is in the Palace Museum, Beijing, illustrated in Monochrome Porcelain, The Complete Collection of Treasures of the Palace Museum, vol. 37, Hong Kong, 1999, pp. 40-1, no. 36, and front cover. Like the current jar, the Hongzhi jar in Beijing has a yellow exterior, but is white on the interior. A Qianlong yellow jar of this form from the imperial collection and now in the Nanjing Museum is yellow on both the exterior and the interior – illustrated in Qing Imperial Porcelain of the Kangxi, Yongzheng and Qianlong Reigns, Hong Kong, 1995, no. 65. This too has some gilded lines around the body but fewer than on the Hongzhi jar in Beijing. Another difference between the Hongzhi and the later examples of this form, is that the animal heads on the Hongzhi vessels are more clearly bovine, while on the Qing examples the necks of the animals are somewhat longer and they either look deerlike or vulpine. 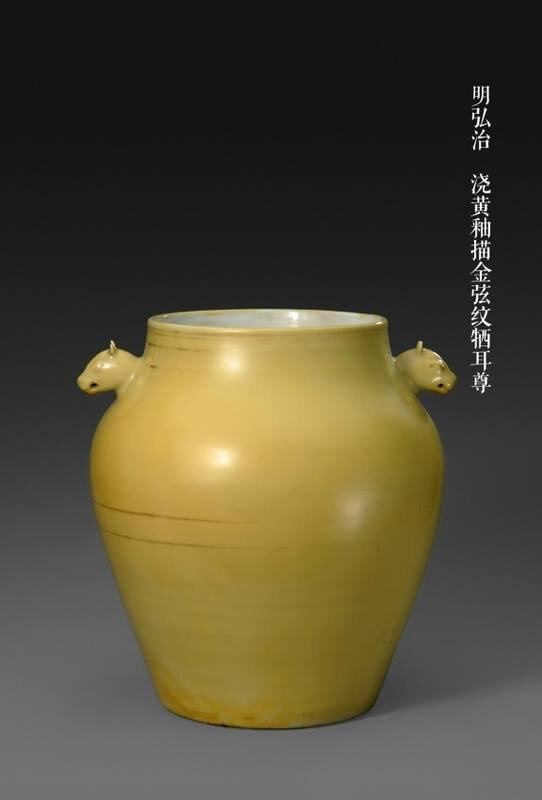 A yellow-glazed Zun in the period of Emperor Hongzhi. Photo Palace Museum.