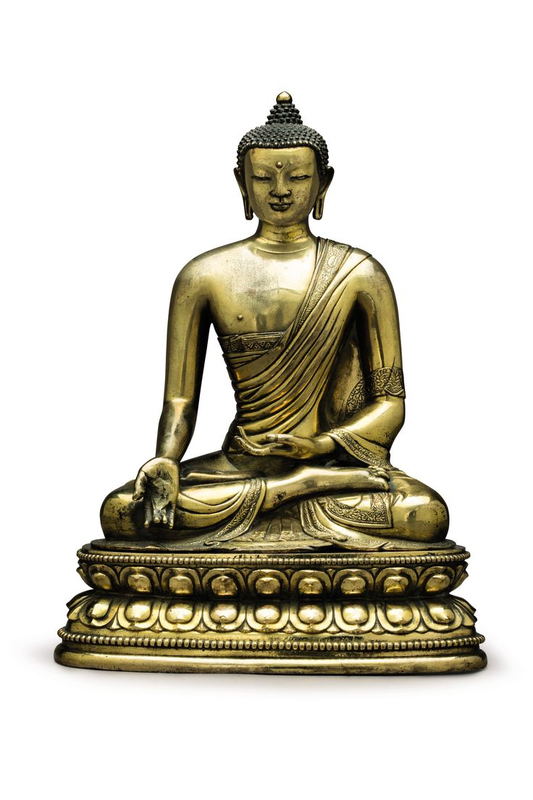 Seated in dhyanasana on on a separately-cast double-lotus base with his right hand invaradamudra and his left held in his lap, clad in voluminous robes with incised hems, the face serene in expression below the snail-shell curls of hair over the ushnisha. 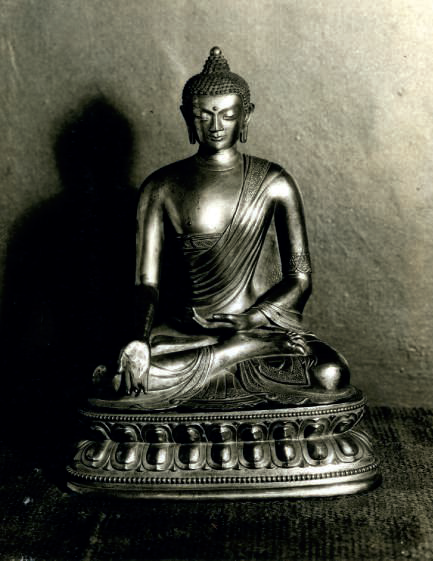 Note: The present work belongs to a small and rare group of gilt-bronze figures from the Kangxi period that have separately cast bases. Among other known examples include a figure of Amitayus, around 24 cm. high and figures of Vajradhara and Green Tara, both approximately 16 cm. high, all in the National Palace Museum in Beijing, illustrated in The Complete Collection of Treasures of the Palace Museum – Buddhist Statues in Tibet, Hong Kong, 2008, pp. 239-241, nos. 228-230. Another related figure of a bodhisattva, around 24 cm. high, was sold by Christie’s Hong Kong on 28 November 2012, lot 2265. The aforementioned works, however, have bases represented as flowering lotus blossoms, with individualized lotus leaves, in contrast to the present example, which is a traditional double-lotus base. The present figure is exceedingly rare in that it appears to be the only known Kangxi-period figure of the Buddha with a separately cast base. It is unclear why the present figure was constructed with a separately cast base, when many of the other Kangxi-period gilt-bronzes, including the massive gilt-bronze figure of Amitayus following the present lot, have integrated bases, but in the case of the smaller bodhisattva figures in the National Palace Museum, it would have made casting the individualized lotus petals significantly simpler. In the case of the present Buddha figure, which does not have the individualized lotus petals, it may have allowed for both the figure and the base to hold consecration relics.