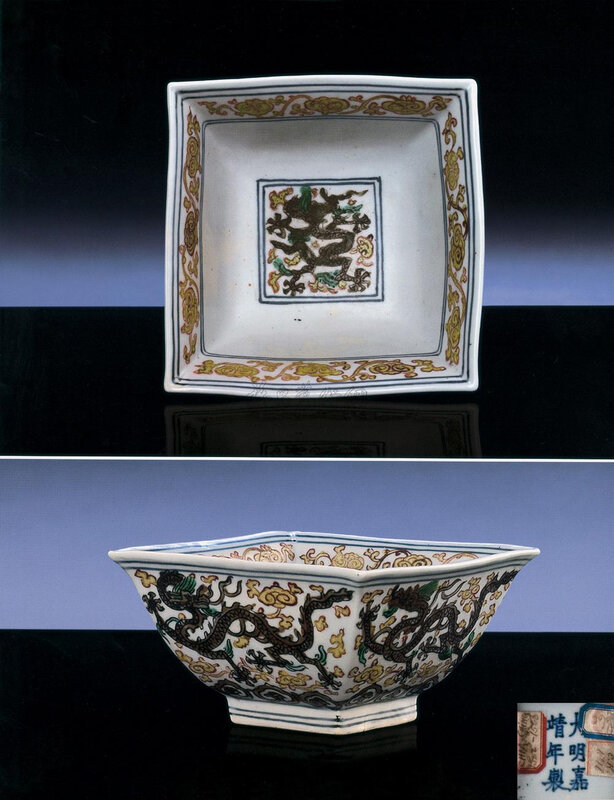 With deep, slightly rounded flared sides, each facet enamelled in a brownish aubergine tone with a lively five-clawed dragon detailed in black and with green tufts of hair racing amidst sprigs of yellow lingzhi fungus outlined in iron-red above a band of aubergineruyi heads, the centre of the interior with a similar square dragon medallion belowlingzhi scrolls at the rim, all within double-blue line borders.

Several bowls of this shape and size and with the same unusual combination of enamel colours and similar decoration have been published. Four are in public collections: one, illustrated by J. Harrison-Hall, Ming Ceramics in the British Museum, London, 2001, p. 265, no. 9:114; the Victoria and Albert Museum, illustrated by W.B. Honey, The Ceramic Art of China and Other Countries of the Far East, London, 1945, pl. 113(a); the Shanghai Museum, illustrated by Xia and Feng, Zhongguo meishu quanji; gongyi meishu bian - 3 - taoci xia, Shanghai, 1991, no. 120; and the Itsuo Art Museum, illustrated by Yajima, Overglaze Enamel Ware in the Ming Dynasty, Japan, 1996, no. 32.

Other examples in private collections include one in the collection of C.P. Lin, illustrated in the exhibition catalogue, Elegant Form and Harmonious Decoration, Percival David Foundation of Chinese Art, London, 10 June - 10 September 1992, no. 81; one included in the Exhibition of Chinese Art, Venice, 1954, p. 192, no. 711 and later published by J. Ayers, Chinese Ceramics: The Koger Collection, London, 1985, no. 84; and one illustrated by J. Wirgin, Chinese Ceramics from the Axel and Nora Lundgren Collection, 1989, no. 59. Another is illustrated in Chinese Porcelain: The S.C. Tianminlou Collection, Hong Kong, 1987, Part I, p. 118, no. 70, where it is noted that square bowls of this type were popular during the Jiajing period and were decorated with other designs and colour schemes, but their popularity declined after the Wanli period.