Each spirited horse is modelled in full gallop with the rider wearing a long close-fitting robe, twisted at the waist. Both riders' heads are lowered to follow the course of the ball. Each face is detailed with black and red pigments, with traces of dark red and black pigments overall, with stands.

Property from a private European collection.

Provenance: Acquired in Switzerland in 1988.

Note: The earliest literary and visual evidence of polo in China dates from the 7th and 8th centuries, including stories of polo-playing emperors and members of the imperial family. There are two categories of pottery polo players: dynamic riders seated on horses shown in full 'flying gallop', with no integral support or stand, and elegant riders seated stiffly on horses standing on a rectangular base. The present figures belong to the first category, as do the four similar figures of female polo players in the Nelson-Atkins Museum of Art, Kansas City, referred to in Handbook of the Collections, vol. II, Art of the Orient, Kansas City, 1973, p. 81. See, also, the figure in the Tenri Museum in Japan, illustrated by Hasebe and Sato, Sekai toji zenshu, vol. 11, Tokyo, 1976, pl. 183. 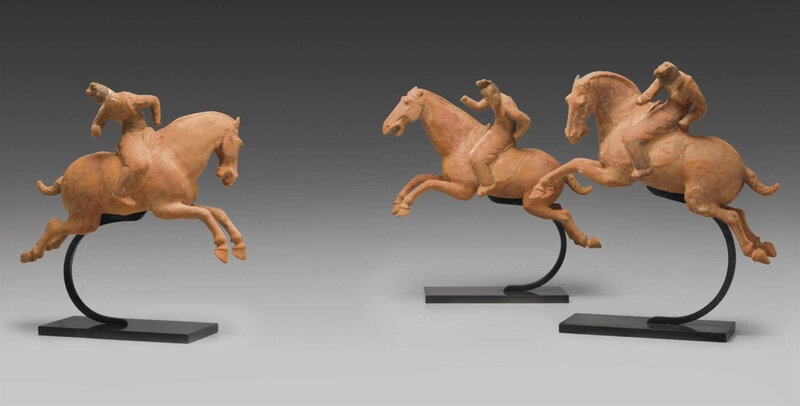 The results of Oxford thermoluminesence test nos. C198t3 and C198t4 are consistent with the dating of this lot.