Six Dynasties Art from the Norman A. Kurland Collection (Part one) at Eskenazi

Six Dynasties Art from the Norman A. Kurland Collection (Part one) at Eskenazi

This exhibition features a superb selection of Six Dynasties art (220 to 581 AD) assembled over four decades by Norman A. Kurland, a renowned film and television agent. His focused and scholarly eye has led him to form perhaps the best collection of Six Dynasties art in private hands. The thirty-eight pieces in the current exhibition, though limited primarily to the fifth and sixth centuries, range widely in material – stone sculptures, earthenware figures, gilt-bronze metalwork and glazed ceramics. Highlights include rare examples of Buddhist sculptures, both freestanding and those from imperially sponsored Buddhist cave temples such as Yungang and Gongxian and finely modelled earthenware tomb figures. Avalokiteshvara, the bodhisattva of compassion, also known as Guanyin, was one of the most popular deities in early Buddhist culture. Finely cast and incised with petal and flame details and covered with rich gilding, the forty-eight character inscription on the back indicates that this figure was commissioned in the early sixth century by a Buddhist devotee. 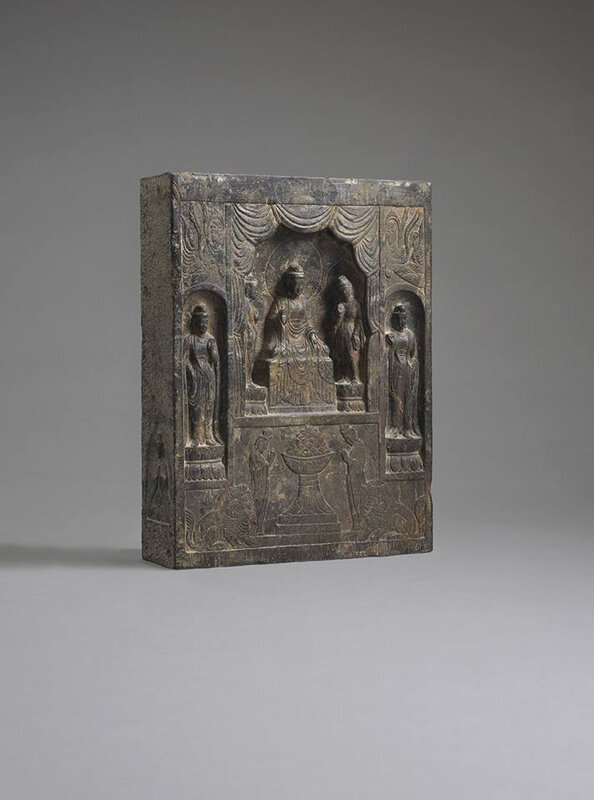 The figure of the Buddha Shakyamuni, the historical Buddha, is carved in the central niche of this limestone stele. The reverse depicts Maitreya, the Buddha of the Future, an important focus of worship in China during the late fifth and early sixth centuries. 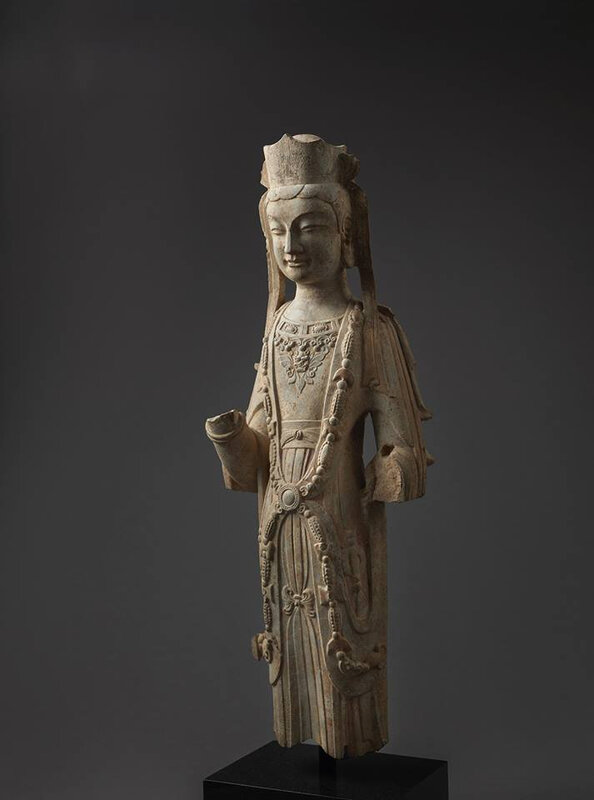 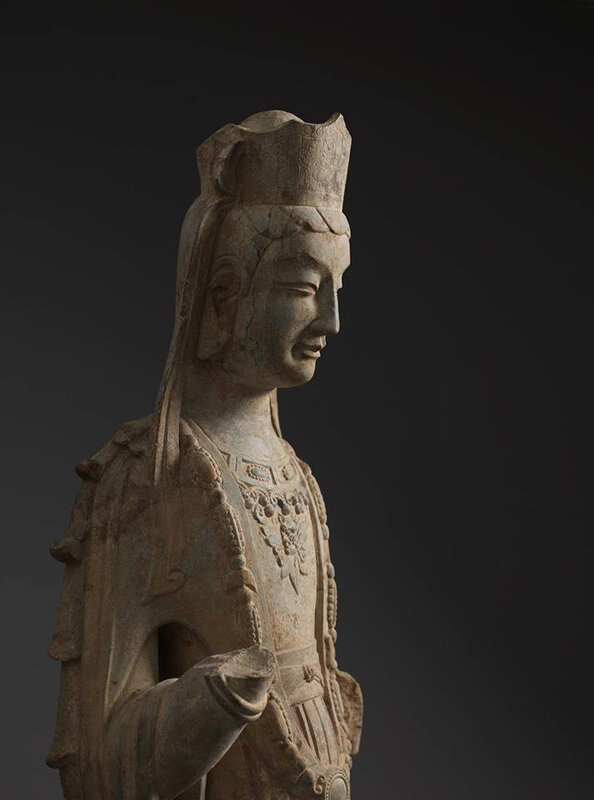 Fully carved in the round, this limestone bodhisattva is adorned with rich ornaments including a five-point crown, bracelets and layers of necklaces. Of particular note is the long, looped chain laden with medallions, cabochons, ‘jade’ pieces and branches of ‘coral’. Exuberantly decorated with appliqués of human masks with bushy brows and thick moustaches, with ring-handled lion masks, foliate motifs, beaded tassels and round studs, this jar is one of three known examples of this type, two of which are in museum collections. These realistically and intimately modelled earthenware hounds provide a window into the domestic life of the Six Dynasties period: one is in an alert position with paws crossed while the other is intently gnawing on a hunk of meat wedged between its massive paws. Elegantly modelled in mid-stride, these lively horses with their curving necks and slender legs, are remarkable for the lavish trappings around the head, chest and rump, all highlighted in rich pigments and gilding. 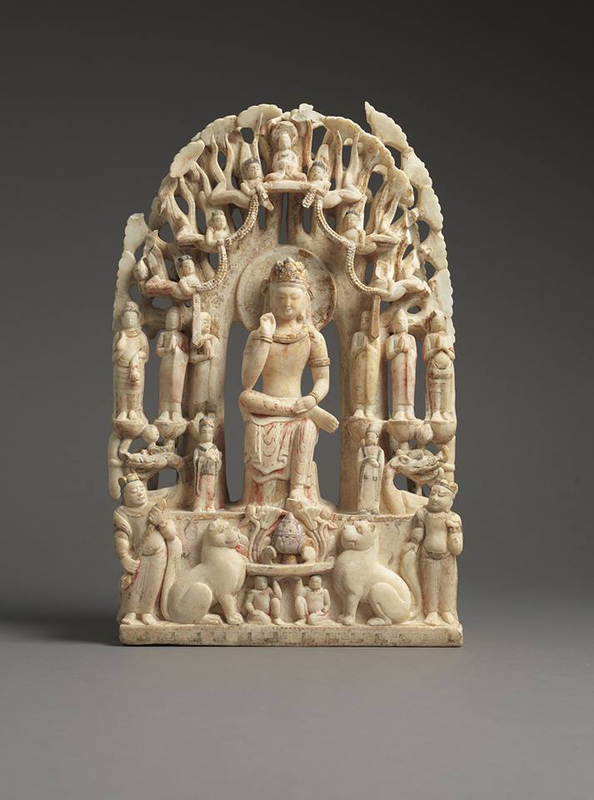 Carved in translucent white marble, this rare and intricate openwork stele features a crowned deity seated in a pensive pose beneath a gingko tree. He is flanked by disciples while above his head flying apsaras bear a beaded garland. A pair of Buddhistic lions are seated beneath his feet. 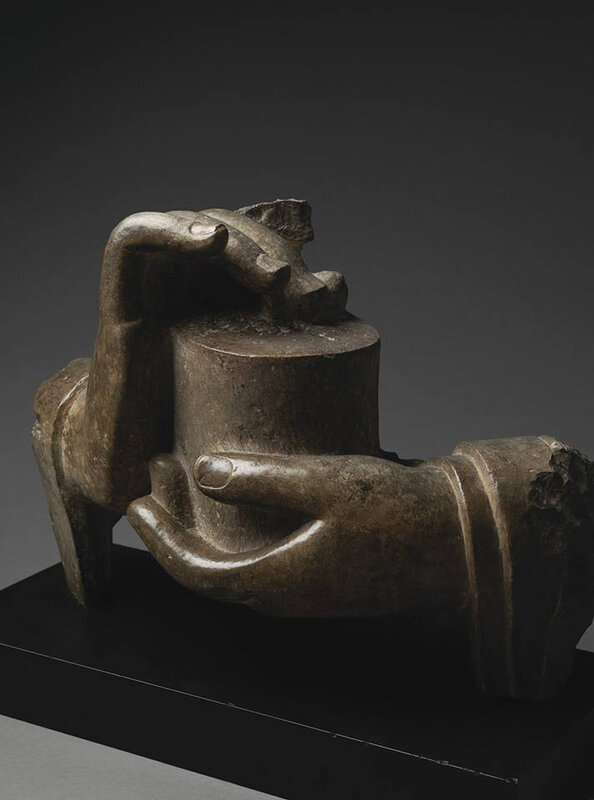 This monumental pair of hands holding a reliquary, sensuously carved in brownish limestone, are now known to have originated from the imperially sponsored ‘Shakyamuni Cave’ at the Xiangtangshan cave temples, Hebei province, China. The hands belonged to the figure of Kashyapa, Buddha’s oldest disciple, carved standing to the left of the main figure of Buddha inside the cave. After Buddha’s funeral, his ashes were divided into eight portions and carried by his disciples to be enshrined in eight stupas: Kashyapa personally carried a share, presumably in a reliquary, to the King of Magada.

Commentaires sur Six Dynasties Art from the Norman A. Kurland Collection (Part one) at Eskenazi