LOS ANGELES, CA.- Thousands of miles, harsh terrains, and diverse waterways separate India and Europe, and yet people and materials in these vast regions moved with great frequency during the medieval period. The pages of illuminated manuscripts reveal a dynamically interconnected world filled with real and imagined ideas about life on this earth and in spiritual states beyond.

Drawn primarily from the Getty’s permanent collection, with important loans from local institutions and private collections, Pathways to Paradise: Medieval India and Europe on view now through August 5 at the J. Paul Getty Museum, explores the ways decorated books and portable luxury objects reflected their owners’ knowledge of and ideas about the greater world, as well as their spiritual quests for sacred groves, providential gems, and guides to enlightenment. “This exhibition expands on themes we explored at the Getty in the 2016 exhibition Traversing the Globe through Illuminated Manuscripts and currently in Rembrandt and the Inspiration of India: that the people of early modern Europe were not isolated, but interacted dynamically with other cultures,” explains Timothy Pott, director of the J. Paul Getty Museum. “With particular focus on how artists in India and Europe conceptualized the idea of paradise, the exhibition explores the diverse religious traditions of these widely separated culture spheres, how each produced wondrous manuscripts and other works of art evoking otherworldly celestial domains.”

The Land of India from Vincent of Beauvais and Jean de Vignay, Mirror of History (text in French), Ghent, artist unknown, about 1475. The J. Paul Getty Museum

The word “paradise” often describes an idyllic place of unmatched beauty, but it can also refer to a mindset of harmony and bliss. Several world religions share these conceptions of paradise—including Buddhism, Hinduism, Christianity, and Islam—but the path to reaching such a place or achieving this state of mind varied greatly. Whether a physical environment; a metaphysical realm, like heaven; or a state of transcendence, paradise was a potential reality for people of the premodern era, many of whom journeyed from their homelands to destinations across Asia, Africa, and Europe in pursuit of precious materials and sites believed to have great spiritual significance. "Peoples in Central Asia and the Indian Subcontinent have long-interacted with peoples in Europe and Africa, and these relationships are recorded and visualized in hand-written and decorated book arts,” says Bryan C. Keene, assistant curator of manuscripts and curator of the exhibition. “During the long medieval period—from about 500-1500—actual contact increased between geographically distant regions, as seen through the exchange of materials and ideas in this exhibition.”

Book arts were vehicles for the transmission of philosophy, religion, cosmology, and the study of the natural world, and when displayed alongside coins, gems, and other portable objects, they present a picture of a premodern world that was dynamically interconnected and culturally aware. 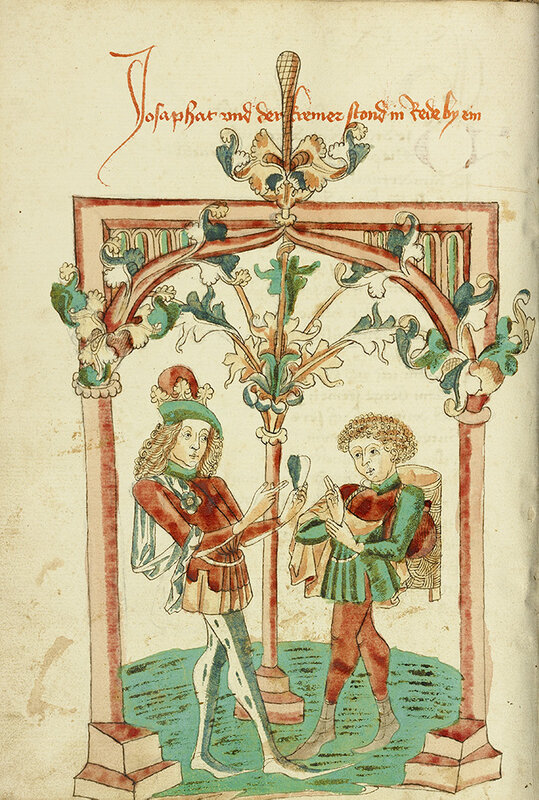 Josaphat Speaking to the Merchant Barlaam about the Precious Gem, from Barlaam and Josaphat (text in German), Hagenau, Alsace, follower of Hans Schilling, 1469. The J. Paul Getty Museum

Coins are among the most portable luxury objects. Necessary for commerce and trade, they also communicate messages of power and faith. Portraits of rulers often adorn one side while divinities or symbols of paradise sometimes decorate the other. At times, coins were beaten into thin sheets and applied as metallic leaf to adorn the pages of books.

Precious goods such as jewelry, amulets, and reliquaries could be carried over great distances. Other objects, including crowns, oil lamps, and votive statues were used to serve local audiences at court, in temples, or in shrines and each of these had the potential to connect owners with metaphysical worlds. Raw materials—such as stones, gems, bronze, and silver—were also highly prized. Many cultures and religions ascribe magical or healing properties to gems and metals, associations often based on ideas about the divine and the afterlife. 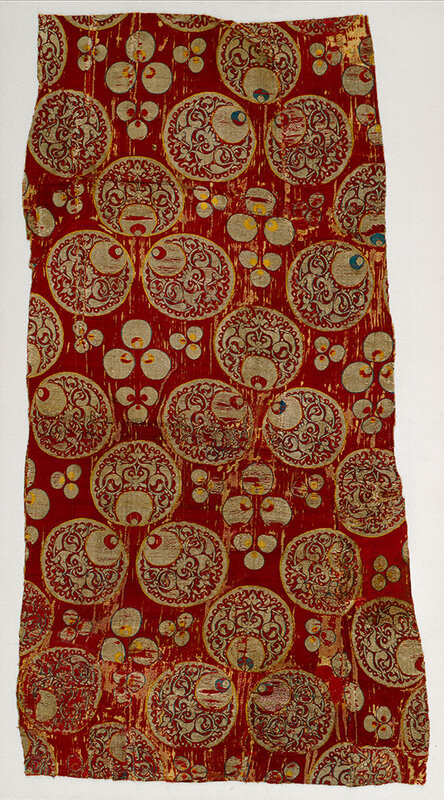 Manuscripts often communicated complex beliefs about otherworldly domains or beings, inviting readers to connect with spiritual realms or to envision the afterlife—states of paradise or infernal damnation beyond the earth. Several of the books and pages presented in this exhibition concern theological beliefs about angels and the spiritual cosmos. The Garden of Eden, from an Illustrated Vita Christi, with devotional supplements (text in Latin), East Anglia, England, artist unknown, about 1490. The J. Paul Getty Museum Iskandar finds Khizar and Ilyas at the Fountain of Immortality, page from a manuscript of the Khamsa of Nizami (text in Persian), Shiraz, artist unknown, 1485–95 (890–900 AH); ink, opaque watercolor and gold on paper. Los Angeles County Museum of Art. The Nasli M. Heeramaneck Collection, gift of Joan Palevsky. Image: www.lacma.org 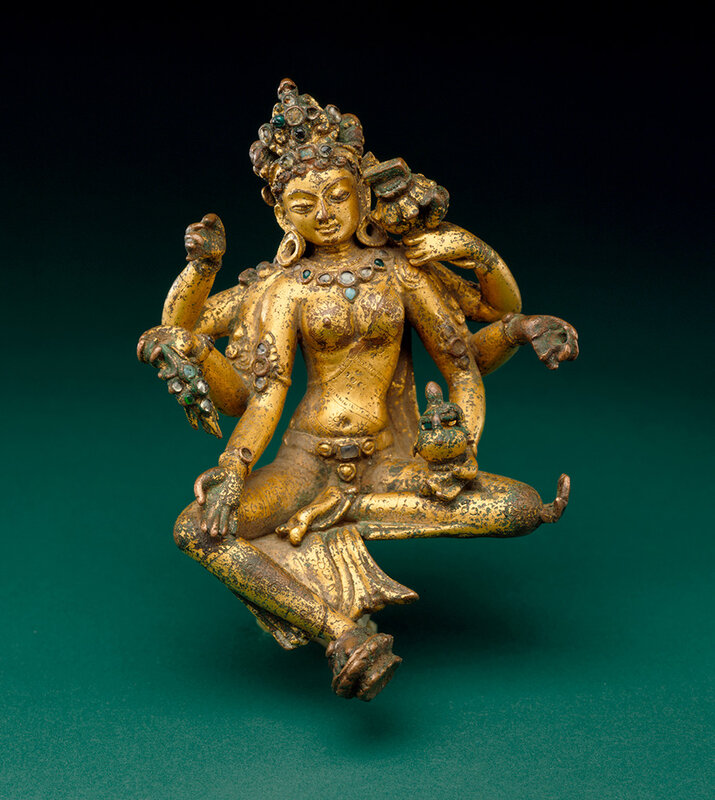